A list of Comic Book Movies without the Spandex

With the opening of The Avengers, Spider-Man and now The Dark Knight Rises there always seems to creep up a new top 10 list of best Superhero movies. It never fails that these list always seem to manage to have the flavor of the moment almost assuredly is taken to the front of the line. While it’s understandable to be smitten with the newfound love of a new beau the test of time will ultimately be the real judge of this. Now I am not saying that everything old is better than everything new but there have been many films over the years that upon there original release that have gone on to either be embraced or the carcass has been staked and buried to forget that it was unleashed on society. For example in 1982 Blade Runner was released and was not very successful box office wise. Critics didn’t really like it and fandom did not readily embrace it either. Yet today it’s hailed as a milestone science fiction epic that influenced generations to come. The Wizard of Oz, It’s A Wonderful Life and Willy Wonka & The Chocolate Factory were also box office disappointments and yet I imagine that you are surprised that they did poorly. On the other hand Hangover 2 was a huge worldwide hit ($581 million worldwide according to box office mojo) but I doubt that anyone will really look back at that film with any fond memories. Just because something is successful does not mean it’s good or bad, it was just popular. On the flip side something that is not popular is not at always  bad. While I agree that everyone is going to have an opinions I feel that the test of time will really determine what is truly classic or a dud. Here are some really good choices and if you haven’t seen some of them you owe it to yourself to check them out.

Here is a list of films based on comics or graphic novels that are not necessarily just Superhero films that you should check out. 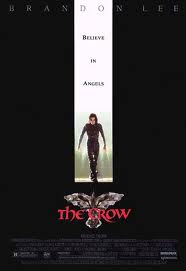 Based on the James O’Barr comic is a very faithful adaption of the comic. Sadly this great film was marred by the death of Brandon Lee on the set of filming. Fortunately for us the filmmakers were able to finish the film because the majority of principal photography had been completed and with the aid of visual effects and some reshoots. Directed by Alex Proyas captures the gothic mood of the source material and with a strong cast deliver a great film. 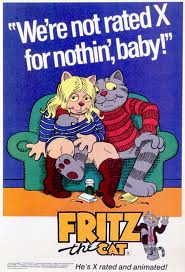 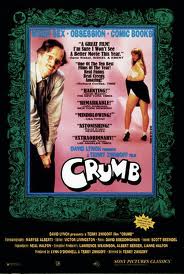 Robert Crumb underground comic Fritz the Cat was adapted by maverick animation director Ralph Bakshi. While loosely adapted from the source material it still has the feel of Crumb’s story and artwork but is heavily influenced by Bakshi’s point of view. It was the first animated film to receive an X rating by the MPAA. It’s a fascinating look at the culture of the late 1960’s and the early 1970’s of sex and drugs. Crumb disowns the film and had very little to do with the finished film.

While Crumb is a documentary and not based on his work is a real must see film for any serious fan of comic books. Terry Zwigoff follows Crumb and part of his family (his sisters refused to take part) to find out how how his artwork does not match the look of Crumb himself. After hearing how he grew up and his family was you start to understand a little of how thin the line we all have inside us. He is able to get his feelings out through his artwork. While the film is really hard to watch at times it does give a really good glimpse into the mind of a genus. It also shows how his upbringing effects his work and his life both good and bad. 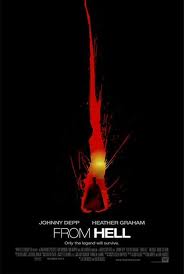 A loose adaption of Alan Moore and Eddie Campbell’s graphic novel that takes the stories of Jack the Ripper and weaves a stunning story of how the horrific acts upon the women of London. The film is unable to adapt the scope of the entire novel it stick to the Jack the Ripper part of the novel and not the side stories that make the graphic novel so great. While not a home run the film adapted by the Hughes Brothers (Albert and Allen) does keep the main theories that Moore introduces. It’s a bit on the slick side but the recreation of the period is top notch. 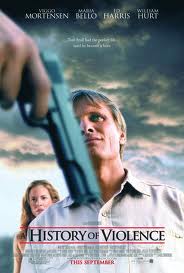 David Cronenberg’s adaption of the graphic novel is faithful for about the first half of the graphic novel and then follows the spirit of the last half. Cronenberg was able to balance the human emotions and the violence and blend it into a truly great film. It deals with how once a person who is trying to run away from his past can never really escape it and how the past and the present collide into each other. 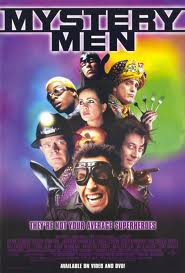 Another loose adaption of Bob Burden’s Flaming Carrot comic it pretty much uses the character names and powers. Admittedly trying to adapt Burden’s work to the film medium is nearly impossible because of nature of the original comic. It’s still a fun little film that looks at a team of Superheroes that are not the cream of the crop. There powers are laughable and don’t always work but they all have one thing in common, they care. A very good cast and a snappy script and art direction make this a really blast. 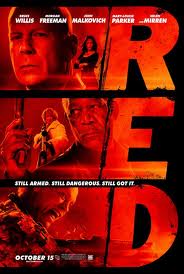 Adapting Warren Ellis and Cully Hamner’s Wildstorm mini series takes the basic plot of the comic and adds new characters to the mix and embellishes on it. It follows Frank Moses who is retired from the CIA and is marked to be taken out. The original book is pretty much just his story where as the film brings in agents that Frank has worked with to take down the corrupted people in charge. The original comic is more action oriented while the film at times takes a more comedy approach. 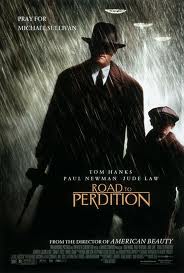 Loosely based on the Max Allen Collins graphic novel does follow the narrative of the graphic novel but does omit much of the violence and Sullivan’s son killing a man. The original graphic novel has a much more pulp feel than the film does. The film itself is fantastic. Sam Mendes follow up to American Beauty is a rich recreation of the depression era story of Michael Sullivan who works for the mob and his son witnesses a murder. To tie up loose ends there is a hit put out on the family. Michael saves his older son Michel Jr and is taking his son to live with relatives. It’s a great father and son tale that has some really outstanding performances from Tom Hanks Jude Law and Paul Newman in final live action performance (He did the voice of Doc Hudson in Cars that is his final performance). 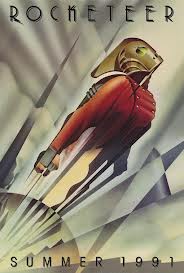 Based upon Dave Stevens stunning graphic novel and it’s a pretty faithful adaption of it. Director Joe Johnston and screen writers Danny Bilson and Paul De Meo loving bring to life Stevens comic. The only things that changed for the screen is some additional were the Hollywood elements and the changing of Betty Page to Jenny Blake. The latter change was because Disney was worried about legal issues because Betty was still alive at the time the film was made. It did keep the feel of the 30’s serials that Stevens had based the concept on. 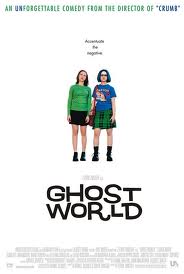 Daniel Clowes comic is brought to the screen by by director Terry Zwigoff the screenplay is adapted by them both. Very faithful to the original comics it tell the story of Enid (Thora Birch) and Rebecca (Scarlett Johansson) of the summer after there graduation from high school and how two best friends lives drift apart. Sharply cast and smartly written this quite possibly is one of the most faithful adaptions of a comic book. 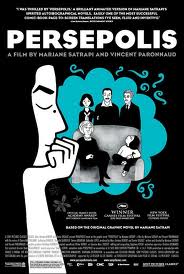 Adapting her own graphic novel Marjane Satrapi autobiographical story of coming of age from her childhood and through her early adult years in Iran during and after the Islamic revolution. The film follows the same black and white style of the graphic novel. A perfect adaption of a really tough but amazing story of the life of women in Iran. 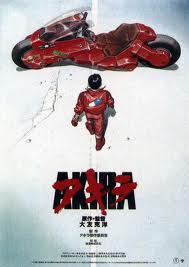 Katsuhiro Otomo directed and co wrote the anime film based on his own manga comic. Ironically not a perfect adaption of his own book partially due to the fact that he had not yet finished the manga at the time the film was being made. Stunning visuals along with an thought provoking story it’s truly a landmark in animation history. 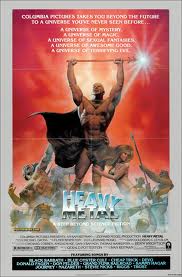 Heavy Metal is the American version of the French magazine Metal Hurlant. The animated movie has both original stories and adaptions of stories from the magazine. Some of the adaptions such as Bernie Wrightson’s Captain Stern and Richard Corbin’s Den are very faithful. And then there is Angus McKie’s So Beautiful and So Dangerous that pretty much only takes the design of the characters and none of the stories. The rest of the stories were original stories for the film. Each segment of the film has it’s own style because of the anthology format of the movie. Very much an adult R rated film that pushed the boundaries at the time. 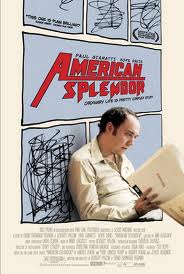 It’s the autobiographical comedy/drama story of Harvey Pekar that is brilliantly played by Paul Giamatti. This film is an adaption and at the same time it is not. You see Harvey wrote stories about his life that were illustrated by various artist. So the movie is Pekar’s life story but told in more of a movie form than a straight documentary. 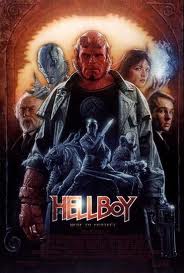 Guillermo Del Toro adaptation of Mike Mignola’s Demonic superhero comic is not a direct adaptation of the comic book but does recreate the feel of Mignola’s moody art and story. Ron Perlman is Hellboy period. There have been very few time in film history where an actor was born to play a part and this is one of those times. Perlman simply gets Hellboy. The rest of the cast is top notch too. Del Toro brings his independent roots to this big studio film. He most importantly keeps the whole film very grounded even though its based in the supernatural. I think the first film is the better than the sequel Hellboy II: The Golden Army but the second one is still fun.