Now before I get started on this review I want to have full disclosure. The writer David Schrader is a co-worker of mine and he asked if I would review the comic on my website. As with any other comic or book because I know David that in no way will affect this review. It is solely based on my impression of the book.

Baby Badass is the debut book from newcomer David Schrader and Tim Larsen that is a mix of humor and tons of violence but done in a tongue in cheek tone. The synopsis is;

A sweet girl in a bad situation, a baby found in the desert brush, and an intense, action-packed brawl that pushes the boundaries of good taste and introduces us to a truly unique Superantihero; this is how it all starts in All Night Long and the End of the Beginning. Baby Badass is a loving homage to the often exploitive comics made famous by some of the 1990’s more macho, vengeance-based creations. The broad strokes of blunt, barbaric violence are balanced by a sprawling storyline that gradually opens up to a unexpectedly crazed yet colorful future. The comedic elements are served in a sardonic stew blending natural and geopolitical catastrophe with some of the more extreme elements of a warped, paranoid society. Also, there are some poop jokes. 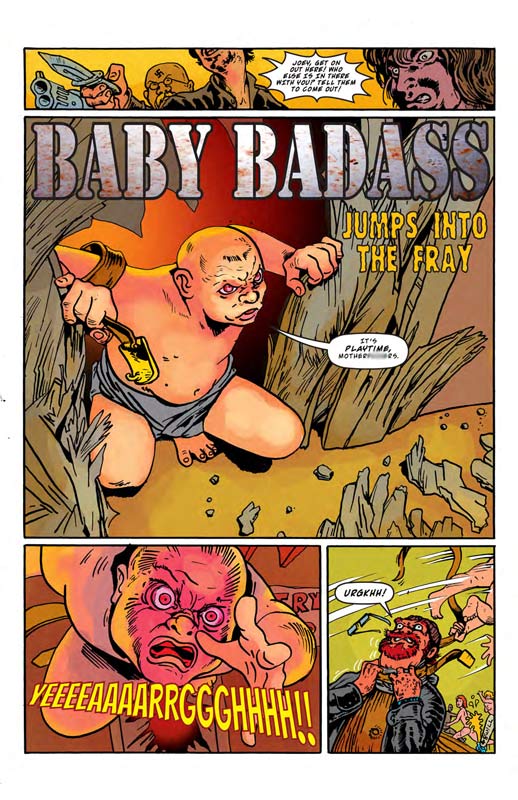 The first issue gets off to a decent start but I would have liked a bit more back story for a new book that the second issue might be a little while away for a self published book. Schrader’s script is good but a little disjointed with the delivery. I liked a lot of the ideas but I felt the narrative of the first issue could have been a bit stronger. There is just not enough story there to make the book come together for a first issue.  I was worried that Joey would be a more T & A character at the outset of the story but he keeps that to a minimum and by the end of the issue she is a little stronger than when the book starts off. I did like the humor and the silliness of the violence but he balances that part pretty well. 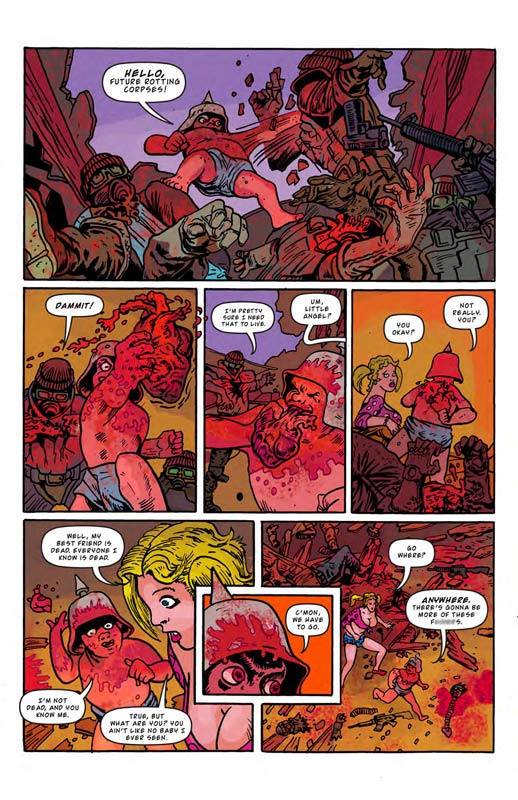 Larsen’s art for a newcomer is pretty impressive. While there are a few perspective issues and some of his color choices were not so great, but overall the art is quite nice. I have seen other books from bigger publishers that don’t look this good in the art department. The color is a bit all over the place and during the fight scenes the orange color is a bit too overwhelming on the art. I do have a PDF of the book that looks better so something could have gone wrong on the printing end of the book so I will give Larsen a little bit of a pass.

Overall the book is a little hit and miss. While there is a good amount of promise in the book and I do look forward to the second issue, the first issue is a little shaky out of the gate. I wish that Schrader had tightened the story in the first issue instead of having ideas that are not as strongly put together as I would have liked. In the end I will say that he got more right than wrong and for a newcomer to comic writing I hope that the book will have improvements with the story in coming issues. On the art side of the book Larsen does a very nice job on the art and I hope to see him improve from this good start for a newcomer. In the end if you like the concept of the book I would give it a shot as long as you are not opposed to violence because it’s a real blood bath in the first issue. I will give the book points for not being like anything else in comics right now. 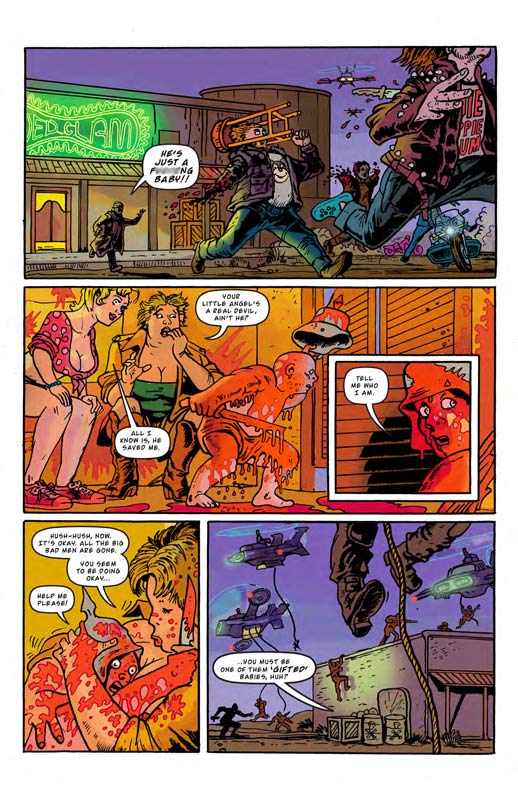 So here is the shameless plug part of the review. Right now you can go to the Baby Badass Website to get a print copy of the book or a digital download. If you are going to be at the Long Beach Comic Con this weekend September 12th & 13th David will have a booth that you can pick up the book and get it signed by him and talk to him about it.