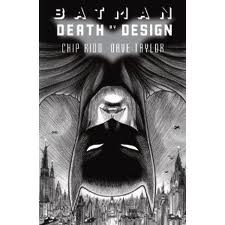 Chip Kidd should be familiar to most comic fans for his great contributions to comics as an art form. He brought together the Bat-Manga book that brought back into print a Japanese manga book done in 1966 to coincide with the Adam West Batman television show being broadcast in Japan. He also edited Rough Justice: the DC Comic Sketches of Alex Ross was a behind the scenes look at how Alex Ross created some of the most iconic artwork for some of DC most famous characters. Designer and novelist Veronique Vienne noted writer and art designer who wrote an eponymous book about Kidd in 2006, described Kidd’s Batman fandom as a “childhood obsession and lasting adult passion.” We are now fortunate enough to see the fruits of his passion in the new book. In the comic book medium the story is only half of the project. Artist Dave Taylor brings Kidd’s story from a by gone era to life. I think that Dave himself sums up the art style of the book perfectly in the supplements at the end of the book. “ All the work in this book is produced with good old-fashion pencils, first in blue line and then ‘inked’ in graphite. I made no corrections with an eraser, what I drew got published. The shading and color I overlaid on computer. This is my most ‘honest work!”

Gotham City is undergoing one of the most expansive construction booms in its history. The most prestigious architects from across the globe have buildings in various phases of completion all over town. As chairman of the Gotham Landmarks Commission, Bruce Wayne has been a key part of this boom, which signals a golden age of architectural ingenuity for the city and then, the explosions begin. All manner of design-related malfunctions – faulty crane calculations, sturdy materials suddenly collapsing, software glitches, walkways giving way and more – cause casualties across the city. This bizarre string of seemingly random catastrophes threatens to bring down the whole construction industry. Fingers are pointed as Batman must somehow solve the problem and find whoever is behind it all.

Kidd’s story is a throwback to comics bygone era. It’s not to say a current Batman reader will not like. but to appreciate the nuances of the story you have to have knowledge of both comic and cinema history. Both the story and the art take the path of being subtle instead of being flashy with little substance being used in most mediums today. On the surface it’s a fairly standard Batman story but as you peel the layers you feel Bob Kane, Jerry Robinson and Dick Sprang seep into Taylor’s art. There is also the cinema influence of noir and Fritz Lang sprinkled in. To me that is what make this book a rarity in mainstream comics. The detail in both the story and the art are so rich it really does take your breath away. Taylor’s understanding of color is really striking. The uses of color is sparingly so that when it is there the impact is much more effective. This book is what an original graphic novel should be. Great story, stunning art and a great hardcover book that is worthy of your bookshelf.