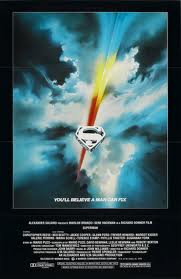 For the record I feel that the best Superhero film of all time is,

In 1978 DC Comics was in bad shape. They were going to expand there comic line to try to better compete with Marvel Comics who was number one at the time. The expanding of the comic line turn into an implosion and many titles were cancelled. Meanwhile DC Comics owners Warner Bros. had sold the Superman film right off to producer Ilya Salkind to make a feature film of the comic. Richard Donner was hired to direct the film which was planned to film Superman The Movie and Superman II back to back. Donner’s task was a very large one to say the least but he always used the word Verisimilitude during the production. It means of being true or real. It was a grueling shot for all involved but with Donner at the helm everyone did there best. It was decided that because the production was taking longer than expected to shut down shooting Superman II and finish Superman The Movie. After the first film was finished the Salkind’s fired Donner and brought in Richard Lester to re-shoot parts of Superman II that had been about 80% finished by Donner.

The last superhero movie to be released into theaters was Batman The Movie in 1966 that was a spinoff of the hugely successful television series. It was Superman to which I feel is every superhero move after it’s release must atone to. I’m not saying that there have not been good superhero movies except Superman The Movie. The problem with most superhero movies are not what I would consider “real” films. To me real movies are Citizen Kane, Close Encounters of the Third Kind, Lawrence of Arabia, 2001: A Space Odyssey, Jaws, North By Northwest. Films like that are films that stick with you. Films that inspire, think, feel and hold up to the test of time. There have been some superhero films that have tried to attain this goal. The Christopher Nolan Batman films, Matthew Vaughns X-Men First Class, and Alex Proyas The Crow come to mind. Unfortunately some of the best adaption of comics have been non superhero comics (see related article).

What makes Superman is a number of things. First Donner at the helm who hired some of the best talent in the business at the time behind the camera. From Cinematographer Geoffrey Unsworth (sadly one of his last films), Production Designer John Barry, Art Director Stuart Craig (who is now known for the production design of all the Harry Potter films), Tom Mankiewicz who’s credit is creative consultant but it’s very well know that he really wrote the script and not the heavily promoted and paid Mario Puzo script. Originally Jerry Goldsmith whom Donner had worked with on the Omen was going to do the music but had a scheduling conflict and John Williams stepped in and created one of the most memorable main themes ever. In any film casting is the key. Marlon Brando with an unprecedented salary of 3.7 million dollars for 12 days of shooting brought a legitimacy to the project. Gene Hackman as the great villain Lex Luthor, Ned Beatty, Valerie Perrine, Jackie Cooper, Glenn Ford, Margot Kidder, Terence Stamp, Susannah York were all veterans of the screen and played there respective part to near perfection.

The problem was that they had been unable to cast the title role. Many famous actors were approached, Robert Redford, Burt Reynolds and even Sylvester Stallone were approached or considered. It was Lynn Stalmaster who saw something in a young actor Christopher Reeve. He put his picture and resume on the top of the stack three times before persuading Donner and Salkin to have him test. The rest is shall we say history. Reeve fit the role like a glove. He had the height but needed to get into shape to become the superhero that generations had adored. Even though Reeve was a relatively newcomer you would never know it from watching the film, he is Superman.

With the cast in place it was now Donner’s task to put it all together. Principal photography started March 24,1977 at Pinewood Studios in England and had some of the largest and most expensive sets to date. Because they were filming both films at the same time (1&2) the shoot lasted 19 months until October 1978 and included shooting in New York that doubled for Metropolis and Alberta Canada that was Smallville. Production shut down so Donner could start editing the first movie for a June 1978 release. Due to production problems the release date was pushed back to December 15, 1978. Because of the rushed production and falling behind schedule the ending of Superman II was used for the first film and Donner and Mankiewicz would come up with a new ending for the second film. Superman was a super hit at the box office scoring $134 million dollars ($454 million in adjusted gross income) domestically and eared over  $300 million worldwide. Even the marketing for the film was one of the best ever. The poster was simple Superman chest logo in front of a sky of clouds with the tagline for the film was “You’ll Believe a Man Can Fly”

The critics at the time mostly praised it Roger Ebert said: “Superman is a pure delight, a wondrous combination of all the old-fashioned things we never really get tired of: adventure and romance, heroes and villains, earthshaking special effects, and — you know what else? Wit. That surprised me more than anything: That this big-budget epic, which was half a decade making its way to the screen, would turn out to have an intelligent sense of humor about itself. The producers held a worldwide talent search for an actor to play Superman, and although “talent searches” are usually 100 percent horsefeathers, this time, for once, they actually found the right guy. He is Christopher Reeve. He looks like the Superman in the comic books (a fate I would not wish on anybody), but he’s also an engaging actor, open and funny in his big love scene with Lois Lane, and then correctly awesome in his showdown with the archvillain Lex Luthor. Reeve sells the role; wrong casting here would have sunk everything.” James Harwood from Variety writes: “In sum, director Richard Donner and his large crews of British and American technical experts did it: they brought this cherished and durable comic book character to the screen, overcoming every challenge in presenting the man who leaps tall buildings in a single bound.” “As both the wholesome man of steel and his bumbling secret identity Clark Kent, Christopher Reeve is excellent. As newswoman Lois Lane, Margot Kidder plays perfectly off both of his personalities and her initial double-entendre interview with Superman is wickedly coy, dancing round the obvious question any red-blooded girl might ask herself about such a magnificent prospect.”

The film was nominated for three Academy Awards Editing, Sound and Original Score and sadly won none. It did however receive a special award for it’s ground breaking visual effects. When the film was shown on ABC February 1982 it included an extra 45 minutes of deleted footage and ran 188 minutes and was shown over 2 nights. Many version of the film appeared in various home video formats throughout the years but finally in November 2006 Warner Home Video released a definitive DVD version of the film that included the theatrical and extended version of the film along with the other four theatrical Superman films and loads of supplementary. The same set was finally upgraded to High Definition Blu-Ray in June 2011.

There has been much talk lately about what is the best superhero film ever made. Of course it’s usually the new and shiny one always makes it to the top of the list. Sadly most of these list are made by fanboys who have no perspective and have not been there since day one. I was fortunate enough to be at the perfect age when Superman was released. I was 14 and was into comics and had been blown away the year before by Star Wars (not episode four or the re imagined B.S. versions). Being a young comic reader was so excited to see it come to life on the big screen was incredible. I remember the local theater at the mall before the film opened had Superman merchandise including real Kryptonite! It was really just glow in the dark rock but was real as far as I knew. At the time I didn’t know all of technical stuff about the film, I just new that my hero had come to life right before my eyes. For me the best example of how great the film works is that Superman himself does not show up for nearly 48 minutes into the feature and yet you are board or wondering where he is. It’s because of the strong storytelling is why it works.

Now I’m not saying that no one will ever make a great superhero movie that could top Superman, but for me it seems unlikely. The main problem with most superhero films is the lack of respect. A respect of the story, direction, casting, cast, crew and of course Verisimilitude. Richard Donner and company understood the task that was given to them and too this day that is why it will be hard to beat.