There were quite a few books this week so I tried to mix some new with some previous ones to see if they are holding up after the first issues. 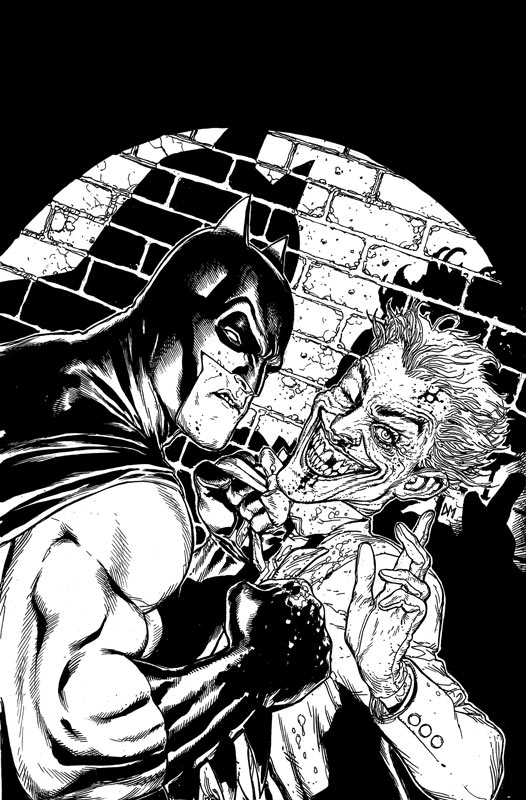 The newest incarnation of Batman Black and White comes to a close this week and it really is going out on a high note. “Clay” is written and Illustrated by Cliff Chiang and lettered by Jared Fletcher that is the story of Robin and his struggles with being a sidekick. I really like the way that Chiang used Robins frustrations to prove that he can handle it all under the pressure. Writer Olly Moss and Artist Becky Cloonan and Lettered by Sal Cipriano bring us “Bruce” and tell the story of dating Bruce Wayne from the girls perspective. It’s a really quite brilliant idea for a story. Dave Taylor writes and illustrates “Hiding in Plane Sight” Taylor was the illustrator of the amazing Batman: Death by Design and tells the story of a mysterious Robot that appears over a set of ancient tunnels. The great Adam Hughes’s “She Lies at Midnight” brings Batman and Catwoman together after she is caught in a mob war. The final story by Dave Johnson “To Beat the Batman” tell a story from a regular criminals view of the Dark Knight. I love that fact that each story is able to tell so much in only eight pages. While there is not a whole lot of depth they make up with really great storytelling. There is not a weak one in the bunch in this final issue. The artwork is just stunning this issue I really loved Taylor’s art has so much detail in it that you just take your time going over each panel. To see Hughes artwork in black and white shows what a master storyteller does. Johnson’s tale is truly haunting and poignant that will really stick with you.

Is this book worth your time and money? I have always been a fan of this book. Taking amazing talent and while the stories are short they have such a richness to them. The thing that I really love about this book is that the average superhero reader is exposed to really great artwork that they would otherwise not see. I only hope that people will take from this book to expand there horizons and try new and different comics and not just the mainstream superhero stuff. Very Recommended!

I was really bowled over by the first issue of this book and felt awful that I had never read the previous incarnations of the book. Thankfully with the help of Image Comics this really great book might reach a much bigger audience that it so much deserves. The plot synopsis from Image is, What do smutty outgoing messages, missing monster kit parts, and condoms have to do with each other? They’re all pieces of Rob’s jigsaw puzzle life in the second monthly issue of BOB FINGERMAN’s so-real-it-hurts series. Plus, things heat up between Rob and his new gal pal, May. Tune in! The thing I loved about the first issue has thankfully not changed in the second issue. It’s a slice of life story that everyone can relate to and we are all Rob in one way or another. Every character is just so normal in the book and that is what makes this book such a great read. While some will find Fingerman’s art a bit on the cartoony style I really think that is one of it’s best assists. I think that it really helps focus the story without a lot of clutter. It may seem simple but it has a lot of detail to it. The book has a great natural flow to it that make you slow down while reading it to make sure that you take it all in.

Is this book worth your time and money? There are so few real life books on the stands today and even less are really good. This is one of those rare ones. A really great story that draws you into a world that you can relate to but is very much different from depressing real life. A book like Minimum Wage rarely comes along and if you are not reading it then you are really missing out on something special. Highly Recommended! 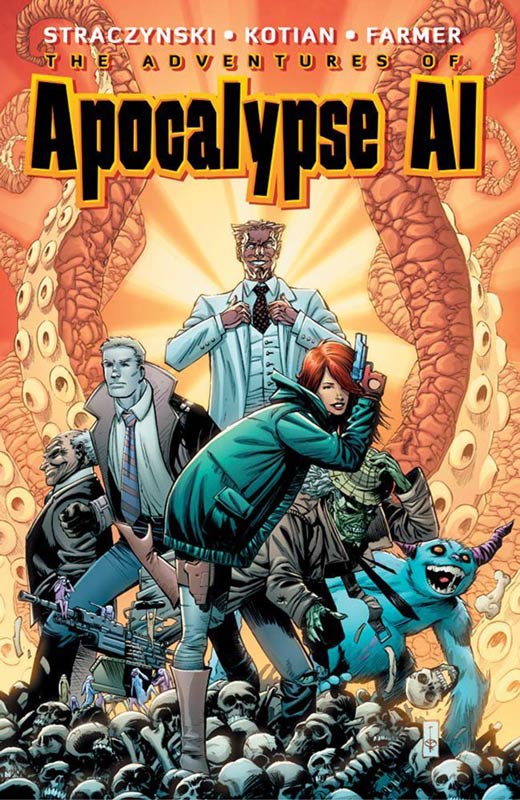 I have not been overwhelmed with the Straczynski books from Image lately so I almost didn’t pick up this weeks new one from him. The plot synopsis from Image is, Alison Carter is a private detective. Her beat: the end of the world, or more accurately, preventing same. With an attitude of “shoot first and the hell with the questions,” she leads a life that would drive other investigators mad, filled with monsters, demons, trolls, mad prophets, zombie detectives, techno-wizards, machinegun toting imps, and dead boyfriends. In the first action-packed installment of this new universe, Al is given her biggest assignment ever, one that will take her into the heart of Ultimate Darkness itself. While the story is not wholly original I did actually find the book to be pretty good. While it’s not going to knock your socks off but compared to the other Straczynski “superhero” books this is leaps and bounds over those. I really liked Kotians art on the book and he really had some great layouts for the story. I could see a lot of different artist influences but I can’t wait to see what the next few issues bring. This was a fun little read this week and the story is interesting. It was nice to see a good female character in a comic and there are so few now days.

Is this book worth your time and money? For $2.99 you could pick up a lot worse this week. It has a good if not a bit predictable ending to the first issue it was really fun. I like the character of Carter and it’s nice to see a good female character in comics. With really nice art I think that this will make a nice story for the four issue run. And if it goes well I think we might be seeing more of Alison Carter in the future. 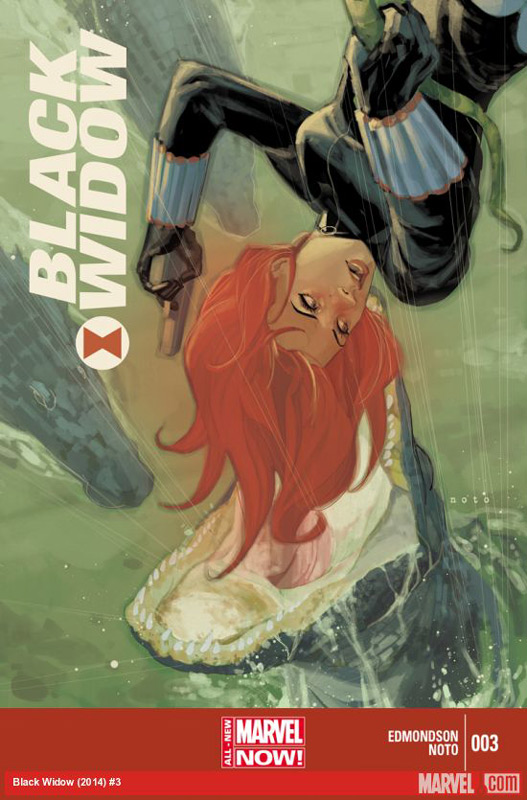 I have reviewed the previous two issues of Black Widow and the only complaint that I have had is there is very little subplot and story arc going on. So I was hoping by the third issue that we might finally be heading in that direction. The plot synopsis from Marvel is, The Finely Woven Thread – PART 3: “FOLIAGE” She’s the kind of woman you call when you need to escape from a South American prison.Don’t miss the book everyone is talking about (and it isn’t even out yet!) Well we are still not there yet. While I really have enjoyed reading this book I just keep getting more frustrated with each new issue. Edmondson really need to get it together and give the reader more than just a one-off every month. It’s like going on a vacation to Africa and you keep going to the same location everyday while it’s pretty you are not experiencing anything different from the day before. While the missions are neat we really don’t learn much about Romanov or why she does the jobs. It’s becoming a been there and done that type of book. I really don’t think Edmondson knows what direction the book is going to go in and is just spinning the wheels. Noto is still the main draw to this book. His artwork is just so effortless that while he is perfect for the book I just wish that the stories would live up to the great art that Noto brings to the book.

Is this book worth your time and money? For the average Marvel Zombie they will think that I am out of my mind complaining about this book. But as a reader who actually wants superhero books to be better than most of them are, this one is starting to lose it. Again you could read this issue without reading the first two and not really miss a thing. And that for me is where the problem is, that each issue is not bringing anything new to the table. This is just becoming disappointing. 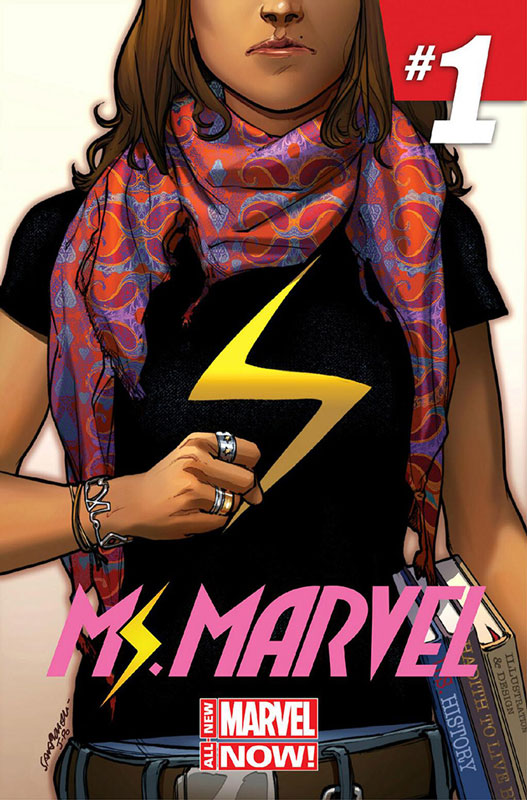 Marvel has been flinging #1 issue out lately that you wonder if there are any books that are over issue 12 in their line. The plot synopsis from Marvel is, The legend has returned! Marvel Comics presents the all-new MS. MARVEL, the ground breaking heroine that has become an international sensation! Kamala Khan is just an ordinary girl from Jersey City–until she is suddenly empowered with extraordinary gifts. But who truly is the all-new Ms. Marvel? Teenager? Muslim? Inhuman? Find out as she takes the Marvel Universe by storm, and prepare for an epic tale that will be remembered by generations to come. The first thing that drew me to the book was Alphong’s absolutely gorgeous artwork. Then I remembered that Wilson had written Air for Vertigo Comics that was really a great book. Well she has really brought a freshness to this book that you rarely see at Marvel. The thing that I loved about the story is the very natural pacing of it. There is a lot of exposition that is happening in the first issue but you are quite taken with the story. She make Khan so accessible to the reader that is why you instantly fall in love with her. We were all teenagers once and we all remember what a pain in the ass it was too. Wilson also tackles the touchy subject of the Muslim faith and shows that no matter what faith you have there are always troubles and questions that go along with it. We get to know her before she becomes Ms. Marvel and that is the best thing about the story. I hope that she is able to keep the story from being turned into a standard superhero book. Alphong’s artwork is really beyond what a standard superhero book looks like. It’s so rich with detail and emotion that is rarely seen at the “Big Two” publishers. The color work by Herring really breathes life into Alphong’s artwork. A really great looking book on every level.

Is this book worth your time and money? Absolutely! This is such a special book that just feels so right. You rarely see this type of book from Marvel that just leaps with creativity in both story and art for a superhero book. I hope that it reaches a wide audience and does not suffer the same fate that Thor the Might Avenger by Roger Langridge and Chris Samnee suffered at Marvel a few years ago. This book really needs to be nurtured and let the story blossom into a beautiful book. Highly Recommended!