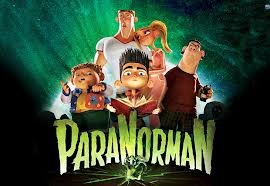 Over the weekend I was able to get out and see ParaNorman. I was really looking forward to it because 1) it’s stop motion animation that I love dearly. 2) The animation was done by Laika Entertainment that made the wonderful Coraline feature. The plot is pretty straightforward, a small town comes under siege by zombies. Who can it call? Only misunderstood local boy Norman who is able to speak with the dead. In addition to zombies, he’ll have to take on ghosts, witches and, worst of all, grown-ups, to save his town from a centuries-old curse. But this young ghost whisperer may find his paranormal activities pushed to their otherworldly limits.

ParaNorman is one of those rare treats that is disguised as a kids film but is really made for adults that grew up on classic 50’s monster movies. Most “family films” only wish that they were this good. While the story is simple to me that’s one of it’s best assets. It allows the characters room to breath and develop at a very natural pace. A lot of the story is beautifully conveyed in the animation. With stop motion, the subtle expressions really bring to life every one of the characters. Beyond the comedy and the horror aspect of the film it always keep the most important thing in mind, it’s heart. From the moment you meet Norman you can relate to him. We have all felt like outcast that no one understands. It never loses site of the point that you always have friends and family that will always be there when you need them.

Visually is where the movie really shines. From the character designs, sets, lighting and the sets they all breath life into this amazing world. This is one of the few films that actually is worth seeing in 3-D. Instead of the usual gimmick that 3-D is they were very smart in the use of it to see the depth of the world that has been created. Directors Chris Butler who had previously worked on Coraline and Corpse Bride wrote the story for ParaNorman. Sam Fell who directed Flushed Away from Aardman bring together a talented cast and crew and create one of the best summer films out there. One thing that I found really remarkable was the voice cast. There are really no big name actors doing the voices they just got actors that truly breath life into the puppets. Kodi Smit-McPhee as Norman and Tucker Albrizzi as Neil are real standouts.

This summer has been filled with a lot of films but ParaNorman is for me the best gift of the summer. I think it’s the one that you will actually want to see again.

Make sure that you stay until the end of the credits for a special treat.