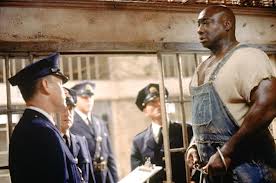 Sadly we lost a good soul today. Actor Michael Clarke Duncan passed away today. He will probably be remembered best for his role in The Green Mile where he played John Coffey. He of course physically fit the role but he brought so much heart and soul to the role that made that film so special. Some of his other roles were Kingpin in Daredevil, Manute in Sin City, Tug’s voice in Brother Bear and most recently Leo Knox in the too short lived television show The Finder. I think the words from his longtime manager says it all,

Dan Spilo, who managed the Green Mile actor for more than a decade, added: “He was the only actor I ever knew that more often than not when fans came up to him, of any age or race or gender, they wouldn’t ask for an autograph, they’d want a hug. He had a heart as big as the world.”

He was a big man with an even bigger heart.