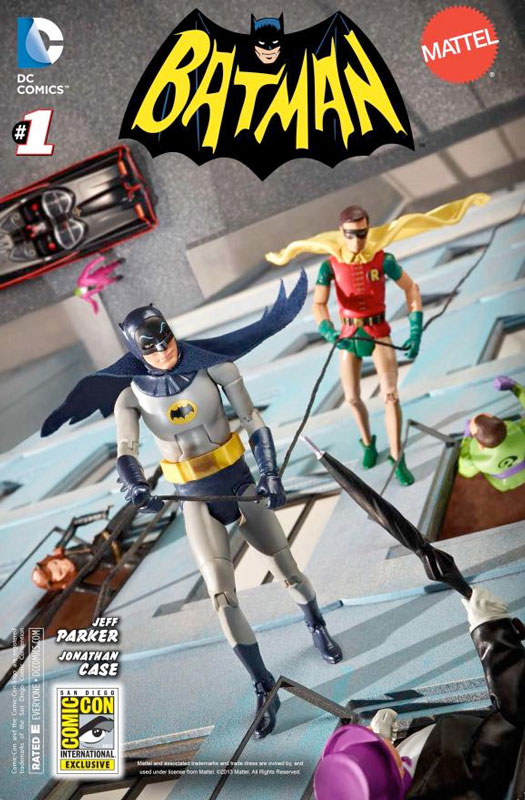 Well I’m still trying to catch up with reviews of new comics and stuff I picked up at SDCC to review. So I will start off with some new books from this week and a couple from the past few weeks. So here we go.

We are all still hoping that the Batman 1966 television show will finally come out on home video soon but until that does DC Comics has decided to create a comic series based on the show with the likenesses of the cast. The inaugural issue features Frank Gorshin’s indelible take on the Riddler leading the Dynamic Duo on a chase through streets and skies of Gotham as he snatches up works by the famous artist Villkoop. With the aid of Catwoman, the most unlikely of allies, will Batman and Robin be able to foil the Riddler’s fiendish plot? Will Aunt Harriet’s snooping around Wayne Manor lead her to discover Bruce and Dick’s dual identity? Written by Jeff Parker and art and color by Jonathan Case they defiantly bring the feel of the original show. I did find myself imagining the voices of the original actors when I was reading the book and what I felt was as if this was an episode of the show that had never aired. Parker story is just perfect and he captures the feel of the show but as comics can do expand the scope that the shows budget would never allow. Case has the hardest task of making sure that the characters must look like their television counterparts but yet still have the freedom to have them have a bit of stretch and squish that you can get away with in comics. His art is so much fun and obviously has a real 1960’s pop art feel to it. It reminds me a bit of Mitch O’Connel’s artwork. The only minor gripe I have with it is while the color work is really nice there are times where Case outlines things with color and it looks like the art has been misprinted. It when all of the color plates are not lined up correctly in the old days of cheap comic printing. I had to look at the digital version to see if in fact there was a printing issue with the comic.

So is it worth your time and money. If you are a fan of the television show or appreciate the tongue in cheek aspect of the show you are going to fall in love with the book like I did. If you are looking for grim and gritty Batman then look elsewhere. I say it’s well worth the $3.99 cover price. (Note I did purchase the digital version and while I liked it the page layout was not as good as the print edition.) 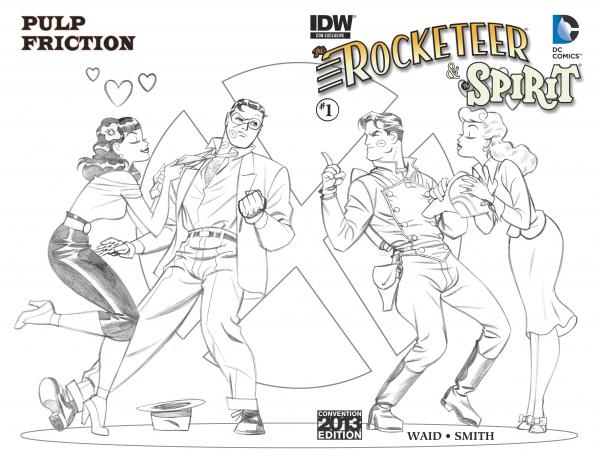 Does it get much better than this? I would say no. Two of comics greatest talents Dave Stevens and Will Eisner created The Rocketeer and The Spirit respectively and though they are no longer with us they have left us with two of the most amazing characters in comics history. IDW has been doing Rocketeer comics for the last few years and has brought many talented writers and artist to continue the adventures of Cliff, Betty and Peevy. One of the writers of some of the stories is Mark Waid who was able to capture the feel that the original Stevens stories had. Now it’s one thing to tackle the Rocketeer but then to add in The Spirit is just tempting fate. Will Eisner defined what comics are today in the 1940’s originally in strips and then later in comic form. Eisner cast including The Spirit, Police Commissioner Dolan and his daughter Ellen among others. Waid handles the challenge and the weight of the project with flying colors. He captures the feel of both cast of charters that features a murder mystery and political intrigue. From the grim and gritty streets of Central City where The Spirit navigates through the urban underbelly of corruption to the sunny skies of Los Angeles where The Rocketeer soars above the Hollywood elite, these two classic characters will become enthralled in murder, mayhem, and all manner of danger-and with a healthy dose of signature humor tossed in for good measure. So one must find an artist that is able to not only capture these classic characters but be able to get the feel of the period. Luckily getting Paul Smith to draw the book is just magical. Smith is able to capture the original look and feel of the characters but is very much his own work. While it may be very simple on the surface it’s really all about the feel of the book. The first issue is just a set up but it’s just so rich in dialog and art that you just wish you could read the next issue right away.

Is it worth your time and money. They don’t make pulp books like this much today so I say add a good dose of pulp to you r reading list and you will not regret it. 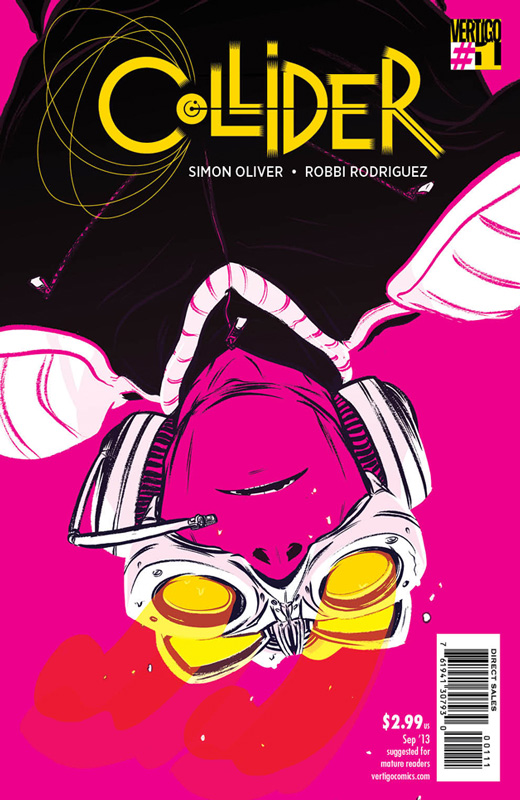 Vertigo Comics has been on a wild ride lately. While they have tried a number of new books lately none have really seem to stick as far as sales goes but that has changed recently with The Wake (Highly Recommended) and now their new series Collider written by Simon Oliver with art by Robbi Rodriguez.It started small: temporary gravity failures, time reversal loops, entropy reversals. With much fanfare a new government agency was formed with a mandate “to prevent and protect.” Its official title: The Federal Bureau of Physics. Humans, if nothing else, adapt to the changing parameters of their existence. What was extraordinary soon became ordinary, a part of people’s daily lives. They move on and do what people have always done: survive. But even that new status quo is now under threat. Things are getting worse, and it falls to Special Agent Adam Hardy and his FBP team to figure out what’s going on, before it’s too late. I was very intrigued by the first issues set up. It nicely sets up the story and the main character of Adam quite well for a first issue. Oliver delivers a lot of scientific dialog without getting overbearing but also has some really fun and snappy stuff too. Rodriguez’s art was very nice and complemented the story very well. There were a few times where the backgrounds were a little sparse but nothing too bad. The color work by Rico Renzi was really nice especially during the gravity shifting.

Is it worth your time and money. I say yes, this is the kind of book I like to see from Vertigo. Well written, good art and a premise that makes you want more. I was very intrigued with the first issue and very much looking forward to the next. 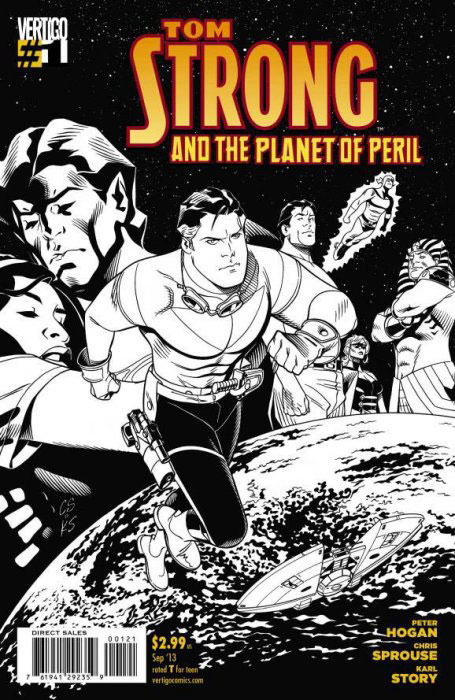 Tom String and the Planet of Peril #1 (Vertigo)

Tom Strong started out as one of the ALan Moore Americas Best Comics back in 1999. After its original run writer Peter Hogan and artist Chris Sprouse did a mini series in 2010 Tom Strong and the Robots of Doom. While I read the original series I have not read the Robots of Doom mini series. So it’s been a while since and not up to date with the characters. In this series we see the return of Tom Strong—too bad he’s powerless! The lives of his daughter Tesla and her unborn child both hang in the balance, and there’s nothing Tom can do to save them…until he remembers the one thing that just might. To find it, he and Val Var Garm must journey to the far side of the galaxy, and the mysterious world known as…TERRA OBSCURA! So in a lot of ways I am like a new reader to this and that the way I came into this new series as I am sure that most readers are. I have to say that if you are trying to get new readers into this book this issue this is not the way to do it. You feel as if you are dropped into the middle of a story and just expected to go with it. Well with a gap of three years I would have really done this first issue much different. While the story is not bad by any means it really just kind of sits there. Even setting aside that you may not be familiar with the cast or the situations I was kind of board reading it. Hogans script is just very standard stuff and it tries a little to explain things I just felt it didn’t do a very good job. Sprouse’s art is nice and clean and does a good visual job with the story. There is no problem on that end of the book.

Is it worth you r time and money. For new readers I don’t think so. While certainly not a bad book it just never captured me. It really made me want to go back and read the original run instead of looking forward to this current story. I might try the second issue but seems unlikely I be visiting the Planet of Peril again. 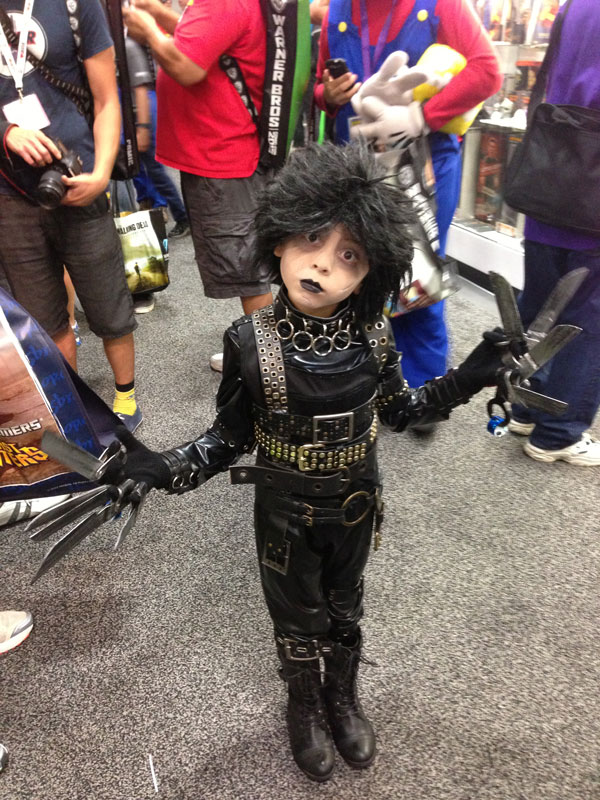