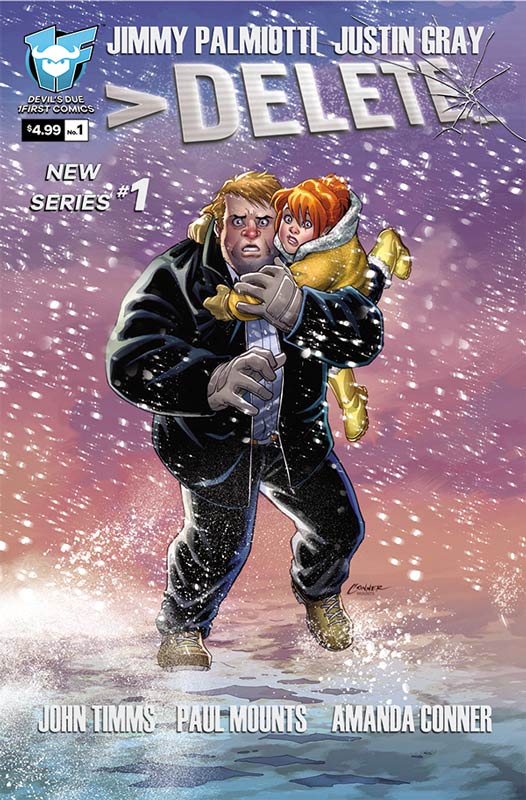 It really seems as if Palmiotti is writing nearly every book every week now with the flood of Harley Quinn books and other publishers. Delete is his newest mini series and he has teamed up with Gray again on Delete. Palmiotti and Gray have a great rhythm to their scripts and the first issue gets off to a nice start. They do a good job of setting up the story but still leaving enough mystery for later. The balance of story and exposition is handled pretty well here and they mix in a good amount of action to keep the flow of the first issue from stumbling too much out of the gate. They hit all of the right beats in the story and give you a nice set up to the next issue. Timms artwork is very nice and he handles both the action and the dramatic scenes with ease and make the book a very pleasant read. There were a few times where the backgrounds were on the sparse side but overall the art was very pleasing. Is this book worth your time and money? I did enjoy this first issue of the book but there is one big problem with it, the price of the book is $4.99 and frankly is not worth it. If you compare the enjoyment to cost ratio it’s just not there. At this rate you could wait for the trade of the story and it will probably be cheaper than buying the individual issues. This is a very troubling development in comics. I understand that Devil’s Due/1First Comics is a small publisher but, I would be willing to have ads in the book to lower the cover price by a dollar. The book is good but not great and the price is not going to help sales of an original IP comic in today’s market and it’s just too saturated. I liked it but very hesitant on buying the second issue because of the cover price. 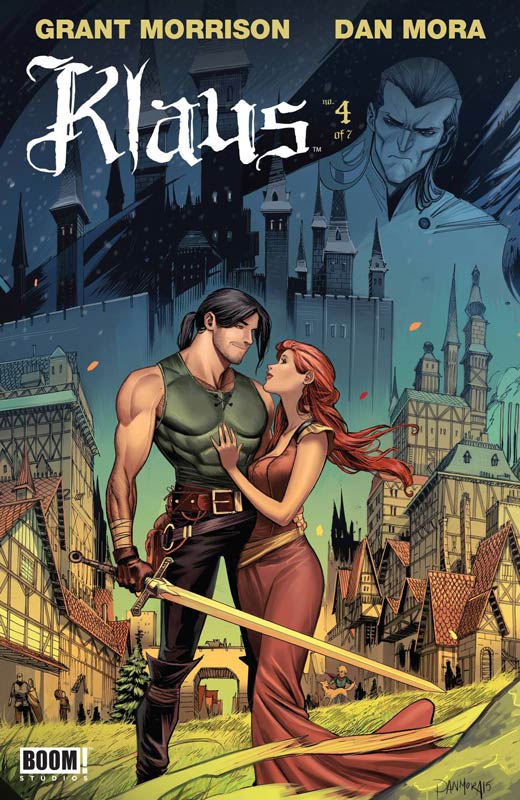 Morrison’s re-imagining of the Santa Claus mythology hits its halfway point and is a good turning point in the storyline. He starts to reveal how all of the main characters are connected to each other as we learn about the origin of Klaus. We also learn how Grimvig turned into its current dark period and the events that lead up to it. I am loving the slow burn aspect that Morrison is brining to the book and is unfolding the story quite nicely. The balance of what we know about the Santa mythology and the new twist that Morrison is giving to it is making for a really solid read each issue with just the right amount of story and leaving the issue with a nice cliffhanger that keeps you wanting more. Mora continues to really bring the script to life with such great detail to the artwork that keeps impressing me each issue. He really captures the very subtle emotions in the drama of the script and draws you into the story. Is this book worth your time and money? Each issue of this book continues to impress me with Morrison and Mora creating a new mythology that give the Santa myth a whole new twist that is very satisfying with each passing issue. Great story and beautiful artwork make this a top read each month it comes out. I’m in it till the end on this one. RECOMMENDED! 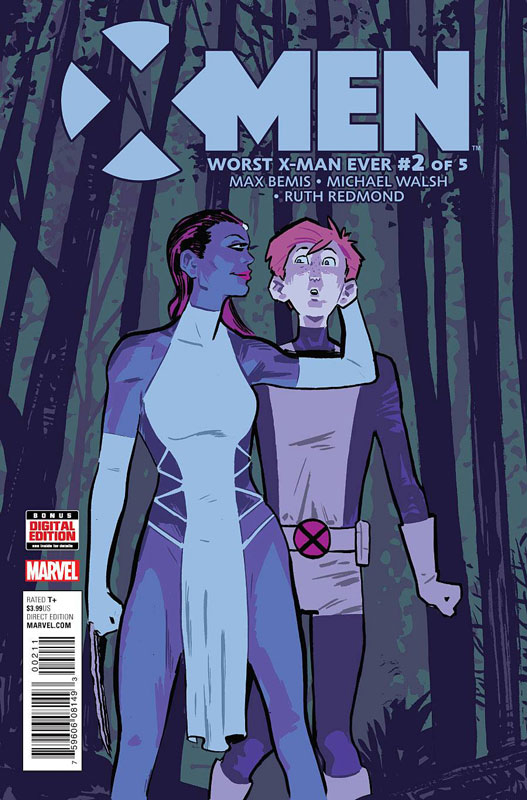 I was very caught off guard with the first issue of this book and glad to say that while the second issue does tread a tad overall it’s a good followup to the first issue. Bemis continues to mine the outcast aspect of Bailey Walsh and milks the humor of the situation. I love that Bemis is having fun with the high school drama and mixing in the superhero aspect of it and while the story is ridicules that is what is making it so much fun. He is not afraid of making fun of anyone or anything and that is what is so refreshing about this book. Walsh indy style approach with his artwork gives the book a real charm and brings out the humor of the script. He is not afraid to play fast and loose with the visual interpretations of the classic X-Men characters and really gives this book a fresh and exciting visual look that you rarely see in a mainstream book and fits the story perfectly. Is this book worth your time and money? Die hard Marvel fans are going to find this book odd and somewhat off-putting with its indy feel and humor but for me that is what I love about it. Bemis and Walsh are not afraid of telling their own story and style that doesn’t try to be just another superhero book. In fact they revel in the absurdity of it all and poke fun at the whole mutant universe. Well worth picking up if you’re looking for a very outside the box Marvel book that rarely happens. 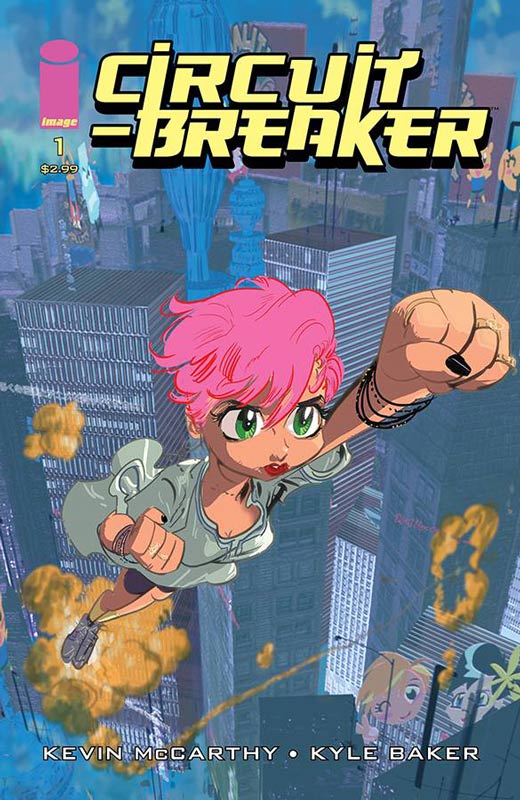 Circuit is a book that has all of the right ingredients for a good book, unfortunately the book is hampered by a script that is very disjointed and frustrating. McCarthy script has a lot of good ideas but it just jumps all over the place and has very little focus to it. The sad thing is that the few times when it works it shows some really good ideas and story but, that is so few and far between that it’s a real struggle to get to the end of the first issue. I am a huge fan of Baker and he nearly saves the book but he can only do so much with the missed opportunities of the script. He really does bring the world to life with his exceptional artwork but with the misfires in the script the wonderful visuals can only do so much here. Is this book worth your time and money? I really wanted to like this book and there is a slim chance that the book could turn around in the next issue but, when a book starts off with a misfiring script like this one it’s going to be difficult to get any reader to come back again. I love Bakers artwork and that is nearly enough to buy the book for it alone but int he end it really isn’t, SKIP IT!

The Rocketeer at War #2

With a very late second issue of this mini series does hit the ground running after a first issue that was a little exposition heavy. Guggenheim and Bullock really ramp up the story and action this issue and do a great job on building from the first issue. All of the cast of the Rocketeer are in place this issue with Peevy joining the story. They have done a great job of weaving in the WWII elements into the Rocketeer mythology and giving the book a fresh spin on Stevens original vision of the book while making sure that they don’t stray from the original source material in tone and feel. Bullock’s artwork is the big star of the book with his classic clean “animation” style that is the right fit for the period of the story. He really ramps up the visuals with the big action scenes in this issue and yet give the small dramatic parts a nice touch at the same time. Is this book worth your time and money? With the complaint of the above Delete book having a $4.99 cover price at least this book gives you seven pages of back up story and a poster that makes the cover price a little easier to swallow here. The story and art are some of the best Rocketeer stories lately and considering that there have been some great talent doing them that says a lot about this book. The Rocketeer is one of the best comics and following Stevens brilliant talent is nearly impossible but Guggenheim and Bullock have crafted a very enjoyable story here that lives up to it. VERY RECOMMENDED! 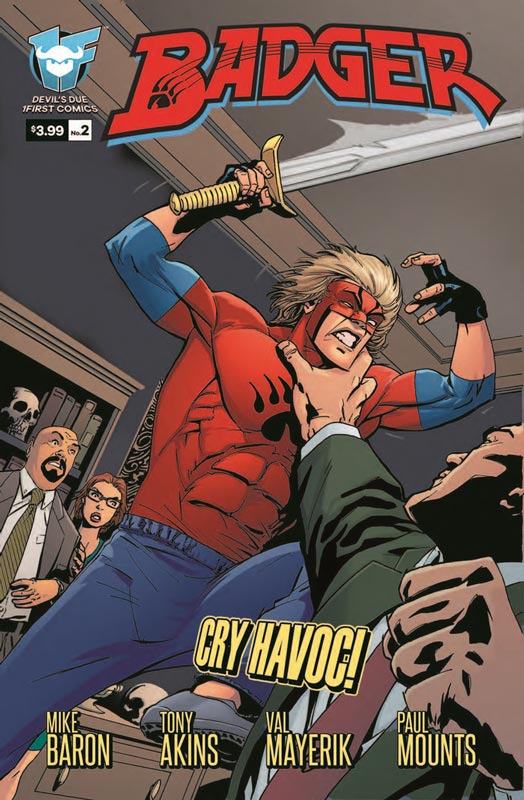 I have been a fan of Badger for a long time and while the first issue of this new mini series got off to a decent start this second issue bring back the good old Badger that we all loved and missed. With the origin and exposition out-of-the-way Baron starts to get to the meat of the story in this second issue. He starts to bring the cast of characters into place and adds some new mythology the Badger that works for both new and long time readers. I really love the idea of giving the story a wizard element to the script that give the story a really grand scope. There are some great twist and turns this issue and Baron gives it a nice pace and gives a great cliffhanger to the next issue. Akins and Mayerik give the book a great old school feel that the book really needs to work. The book was born in the 1980’s and the feel of their art fits perfectly into that period while still working exceptionally well in todays comics. It quite impressive when they pull off the fight scene without dialog and it shows how artist can really bring a book to life and they really bring it to this book. Is this book worth your time and money? I have to hand it to Baron here because he is making this story enjoyable for long time readers while keeping it very accessible to new readers. Add in solid artwork from Akins and Mayerik and this makes for a quite fun comic. Well worth picking up! 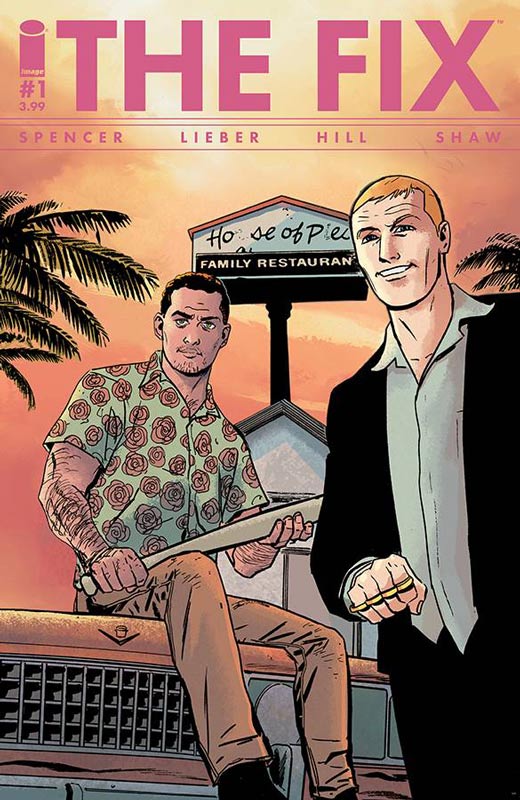