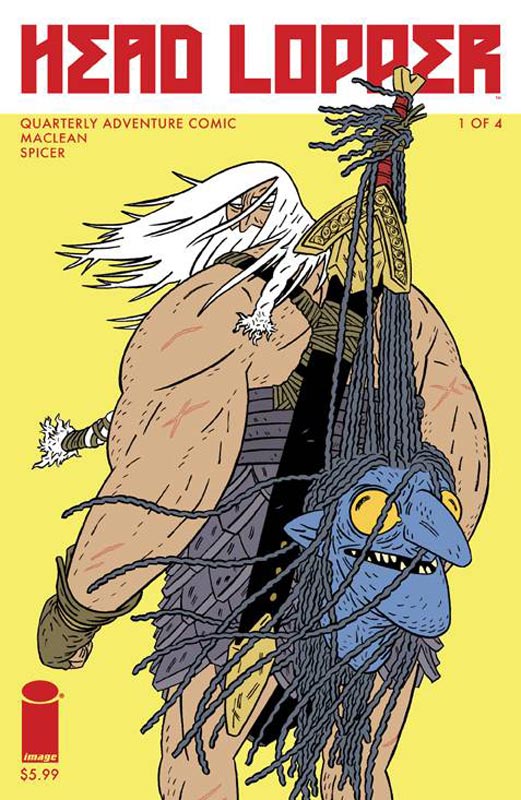 I was a bit sceptical on this book because of the high cover price and it looked mildly interesting but my local comic shop had it as the deal of the week and it was half off. Boy am I glad I picked it up. This book is a grand epic tale that is a hugely oversized issue coming in at a whopping 80 pages with no ads is a steal at the regular cover price. Maclean tells a lot of the story visually that is quite impressive because there is a lot of detail in each panel that tells a lot of the story. This is a grand tale that has a lot of levels to the story that are unfolding quite nicely. Maclean does a great job of introducing the cast but never sacrifices the momentum of the story. On the artwork side at first glance the art has a simplistic look but there is really so much detail to it as you read the story. There are times where there is a lot of detail and times where he keeps it very simple. This is a really great looking book and the color work by Spicer and Maclean really capture the feel that the story is telling.

I really love this book and while it’s going to be tough to wait 3 months for the next issue, there is so much in this first issue that makes it extremely satisfying. Maclean wisely ends the story at a great point in the overall story arc so that is very smart. This book really blew me away and this is a must read book. Great story and artwork make this a real winner. HIGHEST RECOMMENDATION! 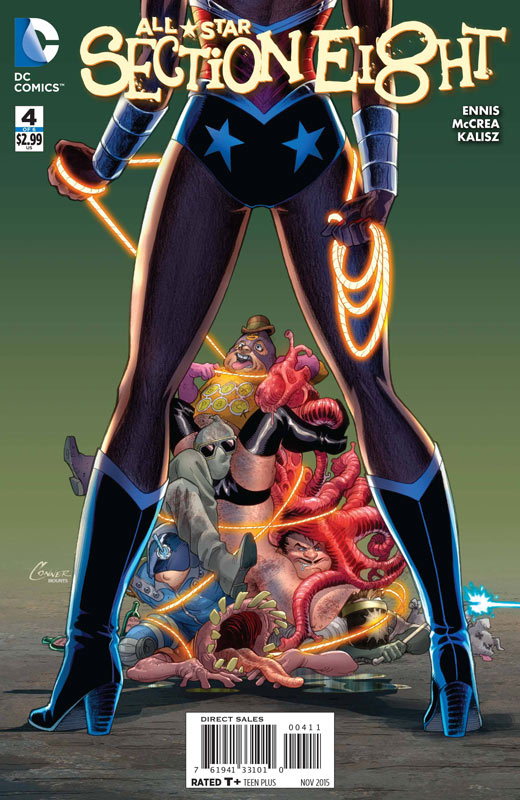 This book has been a fun ride but I must say that this issue is a real standout. The previous three issues have had a similar feel with a new guest superhero each month but the story with Wonder Woman maybe the wildest story I have ever read. While the other stories have the heroes blowing off the Section Eight team, Ennis takes this story is a whole different direction by having Baytor hit her with a hammer and have her become a simpleton that want to join the group. It goes downhill from there but in a really good way. Ennis really goes for the silliness of it all with this story and that is why it works so well. He really changes the game with the book in this issue and leaves a nice little cliffhanger at the end of the issue that is as baffling as it is intriguing. Ennis is really at the top of his game on this book and adding in McCrea’s gorgeous artwork into the mix make this issue one of the best so far. McCrea really goes to town on this issue and his simpleton Wonder Woman is the biggest treat. The expressions that he gives here are truly priceless and the wedding scene is one of the visually funniest things I have seen in a while.

This book is not going to be for everyone but if you enjoy dark humor then this is one for you. I am really loving this book and can’t wait to see where they take it to in the next two issues. RECOMMENDED!

Atomic Robo: The Ring of Fire #1 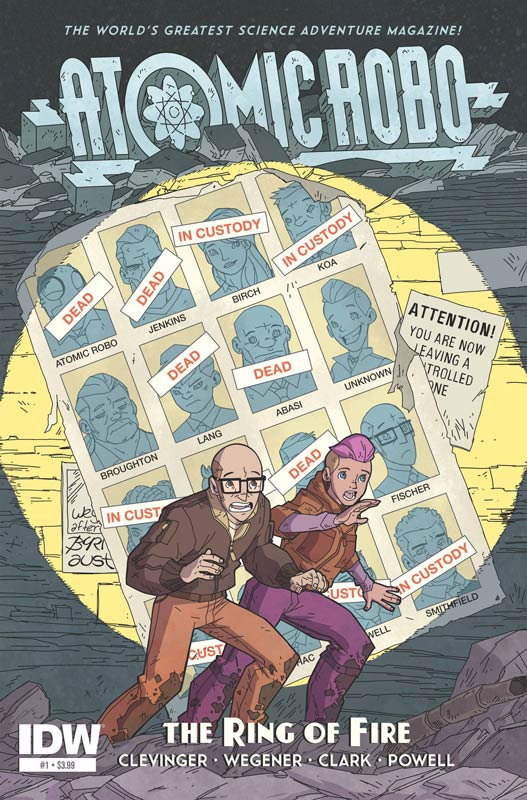 I have been a fan of Atomic Robo from day one and was very excited to see that IDW had decided to publish the series. There is a trade of the previous series, but this is the newest storyline. The great thing about each series is that while they continue story treads each series stands on its own and that makes it easy for new readers to jump on board the Robo train. They give a brief previously on Atomic Robo inside the front cover that will get you nicely up to speed on the story that starts in this issue. Clevinger story for this new series has all of the great classic elements that make this series so much fun. I liked how the team has now gone underground but keep looking for clues to Robo’s disappearance that leads them to an interesting discovery. It was good to see that the team can handle situations on their own. Wegener art is simple but very pleasing. I like his animation style and it fits the fun of the book very well. It was nice to see that he handled the emotions of the characters in this first issue because there is usually a lot of action and it’s nice to see a more dramatic side to his artwork.

Atomic Robo has always been one of those books that is simply fun. It doesn’t try to be more than it is. Clevinger and Wegener keep the book flowing at a nice pace and alway deliver an enjoyable read each time. If you have never read Atomic Robo here is a great chance to jump on board and well worth buying.

The comics inspired by the original series of Star Wars films continues with a story set after the events at the end of Return of the Jedi. Rucka sets up the series with a lot of scenes from Return of the Jedi and then slowly introduces the new elements into the story. At first I was a little worried for the book but after you read the full issue I can see why he did it this way. It gave it a very natural feeling that if there is someone out there that has never seen Return of the Jedi then they will be able to understand the story. This is a really smart approach that Rucka takes because you have to assume that there are possibly some readers that are not ones that live and breathe Star Wars like others. This also allows a very natural flow with introducing the new characters into the mythology. Checchetto’s artwork is very nice and impressive that he can draw both ships and characters spot on is a very rare talent. He handles both the battles and the dramatic elements with artistic ease that it really makes the story flow incredibly well.

I really have to hand it to Marvel for getting some really talented writers and artists to do these books. I also love these side stories that add a nice touch to the original three films. And who didn’t want to see the Ewoks back in action, right. While it’s a given that Star Wars fans are going to buy this book but if you are a casual fan and want to see new adventures that fit into the original series then this is a good book to pick up. 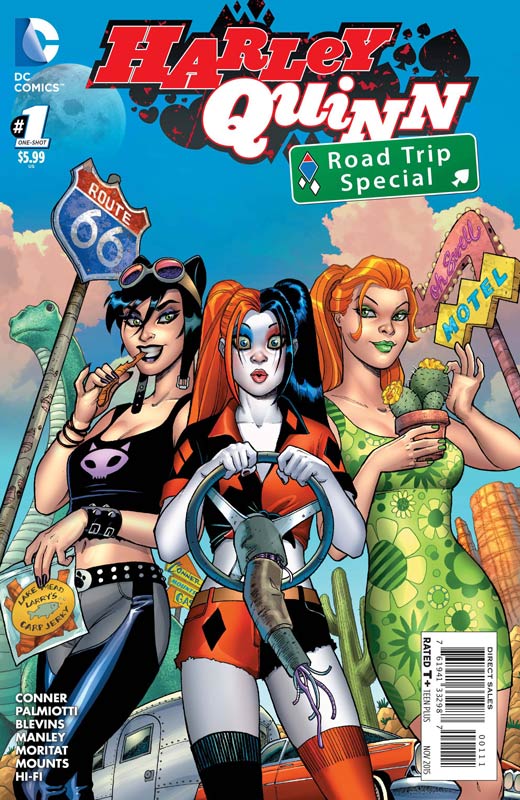 While I understand that Harley Quinn is popular it seems as if DC is going to far with so many regular books and specials. She has two series and two specials so far this year and it seems to be hitting not only a saturation point but the quality is getting pretty thin all around. The problem with this special is that there is a fair idea with the story by Conner and Palmiotti but as with the last special the book runs out of gas about halfway through and ends up being pretty padded throughout the story. The shame is that the idea of the book is pretty decent but it just drags along. The problem with the script is that there are a lot of good moments and ideas but the thread holding the whole thing together is pretty thin at best. On the art side of the book is solid and some nice art by Blevins and Moritat give the book a nice look that helps keep you interested enough to keep the book plugging along.

The book is not bad but I think that with DC pumping out Harley books like water is going to kill the character sooner rather than later. Hey I get it, she’s popular and the books appeal to a different audience than the regular weekly comic reader. But how long will that last with sub par stories padded out for six bucks. Not much longer I’m afraid. Not terrible but pretty average at best on this one. 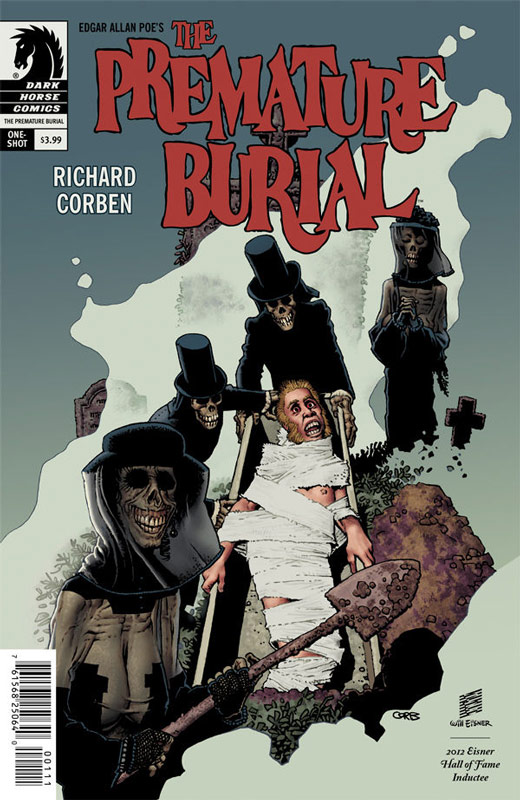 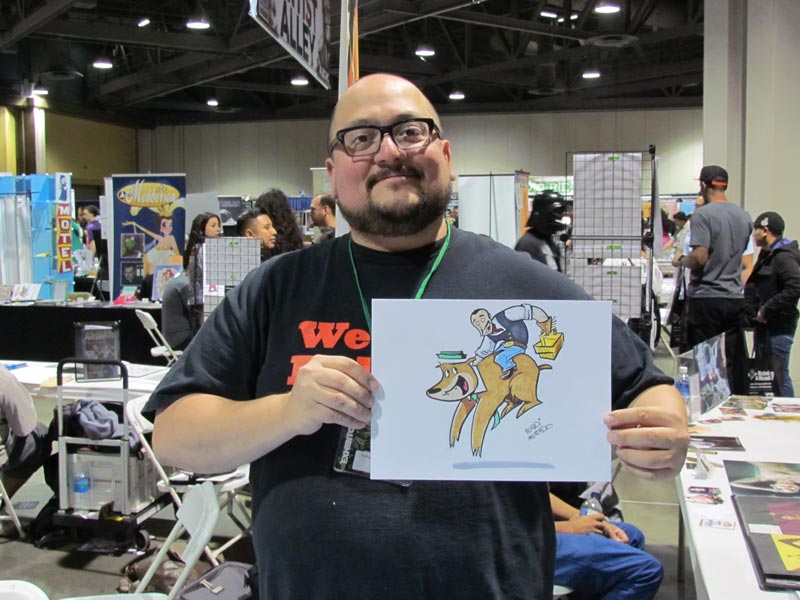 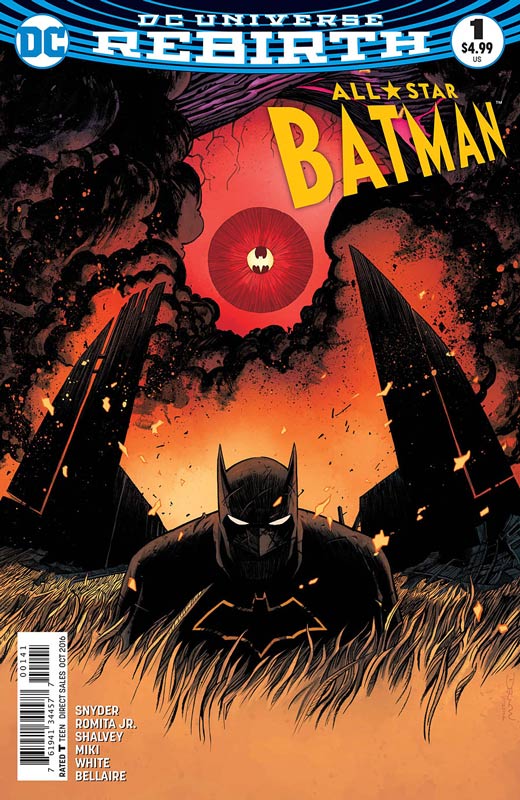