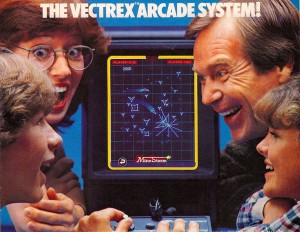 Vectrex was a really interesting system released in 1982. It was licensed and distributed first by General Consumer Electric (GCE) in the United States and Milton Bradley took over international marketing for the unit. The unit had a build in vector monitor and had cartridges for different games. The control panel folded flush into the front of the system. There was a second controller port for 2 player games. In 1972 saw the first vector monitor game release Space Wars. Most people are familiar with Atari’s arcade games such as Asteroids and Battle Zone. Of course the most popular one is The Star Wars arcade machine. Because most of the popular vector monitor games were Atari GCE had to license games from other companies. Most were licensed from Cinematronics who made a number of vector graphic games for the arcades. Star Castle, Rip-Off, Starhawk, Armor Attack and Space Wars. There were many original games for the system developed by GCE. Mine Storm was build into the system so you could play a game right out of the box. Other original game were Bedlam, Spinball, Web Wars, and Hyperchase. One of the the really sought after original games is Star Trek the Motion Picture game that only appeared on the Vectrex. There were three arcade game that were not originally vector monitor game but translated to the system. Stern’s Bezerk, Konami’s Scramble and Namco’s Pole Position.

Because vector monitors are black and white some of the arcade machines used colored plastic to simulate color for the games. Battle Zone appears to be green but that is because of the color of the plastic in front of the monitor. To make this work on the Vectrex system there were plastic sheets that fit on the front of the monitor to simulate the color. Another interesting fact is that the system was portable if you could carry 15 pounds comfortably. There was handle on top back of the system so you could take it with you. There were also a number of innovations in the system. It was the first home system that had an analog joystick. It was also the first 3-D system released. Before the systems demise in 1984 the 3-D goggles would plug in and had rotating disc inside that simulated 3-D. Sega actually had to pull there advertising 4 years later for the Master System 3-D because they had claimed it was the first 3-D game system. The system also had a light pen add on that let you draw pictures on the screen with a pen and a plug in cartridge called Art Master.

The system was released in November 1982 at a retail price of $199. The system only lasted 2 years due to the crash of the market in 1983. At the time the system was considered a failure. It did last a few years longer in Europe. There were approximately 29 games released for the system (not counting prototypes). There are over 80 homebrew games for the system. This is really astounding considering so few games were officially released for the system and best estimates have that there were probably less that 300,000 units made world wide. In the end they were blown out in stores for $50.00 and the games went for $5.00 to $10.00. Today the systems usually can’t be had for less than $300.00 on ebay. They are very sought after and the 3-D goggles were $59.99 when they came out. If you can actually find them (rarely) they usually go for no less than $700.00 to $800.00 and most of the time hit well over $1000.00

I am lucky enough to have a unit and 12 games. It is one of the highlights of my classic gaming collection.