Welcome back to this weeks new comic book reviews. I could only get to 4 new books and 1 from a few weeks back but there are some good reads this week and thankfully no disappointments in the bunch. 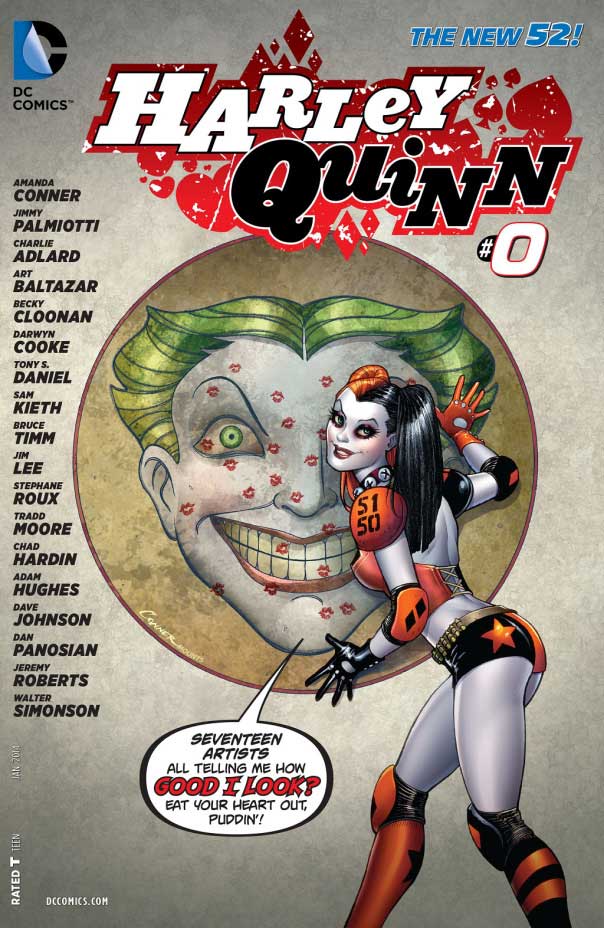 After the controversy of the bathtub new artist tryout page for this issue (that page is no longer in the book). Harley Quinn #0 finally hits the stands this week and I must say that for the most part Harley Quinn is back. She is still wearing the hooker outfit but the fun insanity that made us all fall in love with Harley in the first place is back. The synopsis from DC Comics is, This bombastic debut issue features art by award-winning illustrators including Darwyn Cooke, Sam Kieth, Tony S. Daniel, Paul Pope, Walter Simonson, Art Baltazar, Bruce Timm, Adam Hughes, and others—but will any of them measure up to the exacting standards of the Clown Princess of Crime? Don’t miss the thrilling return of Harley Quinn in her own monthly series! So here is the plot that DC forgot to mention. Harley is in a storage unit and wonders if she should be in her own comic book and then the fourth wall is broken and the “writer” shows her different artist interpretations of what her comic book could be. It turns into an all-star who’s who of artist. There is not really much of a story here just a lot of fun stuff drawn by different artist. The one thing that is done right by Conner and Palmiotti is the tone of the book. This is the Harley Quinn that we have been begging for since she was sadly redone for the New 52. While she is still in that awful hooker costume the tongue planted firmly in cheek is back with a vengeance that has been sorely missing. While the story is thin it’s still a blast to read. The writers use each of the artist talents to create worlds that are best suited for them. It’s hard to see what the book is going to be like until the first issue is released but in the meantime we get a small taste of what is possibly to come.

Is this book worth your time and money? This is not meant to be a real story but it sure is a lot of fun. The book is worth every penny for the art alone but, I hope that the fun tone that is in this preview type book is what the series is going to go in the first issue.

I raved about the first issue when it came out. So I was a bit nervous about the second issue living up to expectations. I am happy to say that the boat is staying on course for the book. The plot synopsis is, Jughead has crashed the dance in the school gym and at first everyone thinks that it’s just a great costume. They soon relies that something in Riverdale has gone horribly wrong. Aguirre-Sacassa keeps things moving along nicely. He does some really nice time jumps in the story such as prologue and interludes to show you other stories in Riverdale to give you a bigger picture of the scope of the story. As always Francavilla’s art is just perfect for this book. He captures the simplicity of Archie’s standard art but is able to go full tilt with the horror. The thing I really liked about this issue is that they are not rushing the story and it’s really unfolding at a very nice pace. While some people might be annoyed at this it really takes a page from classic horror comics like EC, Warren and DC Comics of the 1970’s. The focus is on the characters not the rush of the zombie apocalypse. This issue also includes a back up story from the original Red Circle Comics days with a reprint of a story by Gray Morrow …CAT! from Chilling Adventures in Sorcery that is a really nice addition to the book. I’m guessing that this will help Francavilla out with the schedule of the book. While the dialog of the story is a bit thick at times, it’s great for a new generation to see a master like Morrow artwork. It’s a simple story that you would see during that period in books like House of Mystery or House of Secrets over at DC Comics.

Is this book worth your time and money? I am really enjoying the throwback to great horror comics and classic horror films. They are not rushing the story along too quickly. I hope that in the next issue there will be a bit more subplots introduced. While the main story is great I hope that there is a little more meat on the bone as we go along. At $2.99 for new material and a classic backup is a steal in todays comics and is still well worth the price of admission. Very Recommended! 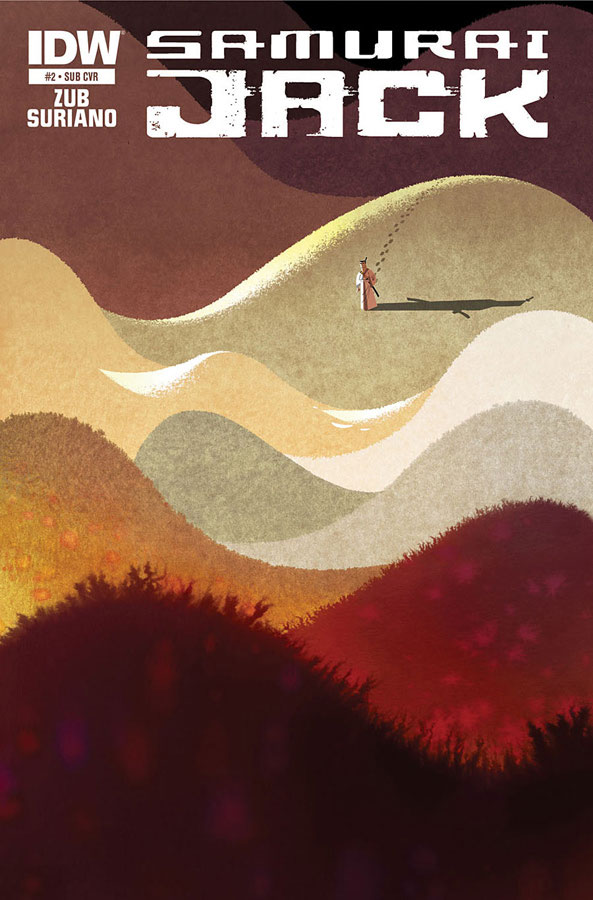 Jack is back and his new quest continues. Jack continues to search for the missing Threads of Time so that he can get back to his own time. His quest brings him to a town that is run by two protectors Dis and Dat, that are actually imprisoning the towns people with fear. Jack tries to fight them but they are magically in sync and Jack is no match. Will he be able to continue his quest? Thankfully the first issue was no fluke and I am very happy to say that the quality of the second issue is just a great as the first issue. Both Zub and Suriano capture the feel of the show I almost felt like I was actually watching the show again. Zub spot on dialog captures the fine line of the drama and the humor of the characters and the dialog of Dis and Dat is really funny. Suriano not only captures the style of the show but his layouts are simply breathtaking. He is able to hit the subtle and the big moments of the book with such ease and grace that you sometimes have to slow down to take it all in.

Is this book worth your time and money? If you are a Samurai Jack fan then you already know how great this book is. For those who are not familiar to the story and are worried that you might be lost then do yourself a favor and give the book a try. Even if you have never seen the show I think that the book would still work just as well. A great all ages book that is sure to please. 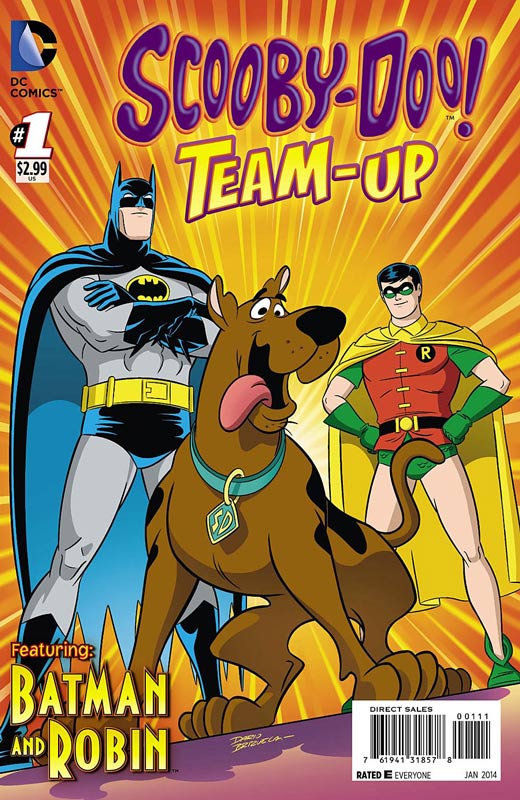 While I bought this book for nostalgia’s sake because I am a huge Scooby-Doo fan and loved the Scooby-Doo meets movie show. The plot synopsis from DC Comics is, Rumors of a giant bat-creature bring Scooby and the gang on the run—but Batman and Robin are already on the trail of their old foe, the monstrous Man-Bat. Before long, the crooks behind a fake bat-creature will come face-to-face with the real thing…with the good guys caught in the middle! Don’t miss the start of this new, bimonthly miniseries! I have to admit it might just be the best books of this week. If you know Scooby-Doo show and the movie team up show then you are in for a treat because it very obvious that Fisch is one too. There are many nods and winks to the show and he captures the feel of the team up movies that fans of the show will appreciate. The thing that I liked was that the book doesn’t try to be more than it is. It’s simple and fun yet very satisfying at the same time. Brizuela does a really nice job of capturing the simple style of the animated show like using color for backgrounds but does a really nice job of capturing facial expressions. My only problem with the book is that it’s bi-monthly. That means that I have to wait two months for the next issue. The second issue will also have Batman but I hope that future issues would also include some pop culture figures but I sadly doubt that will happen but one can wish.

Is this book worth your time and money. If you are a fan of Scooby-Doo and more specifically the team up movies then definitely pick this book up. Yes it’s an all ages book it made me feel like is was Saturday Morning all over again. Very Recommended! 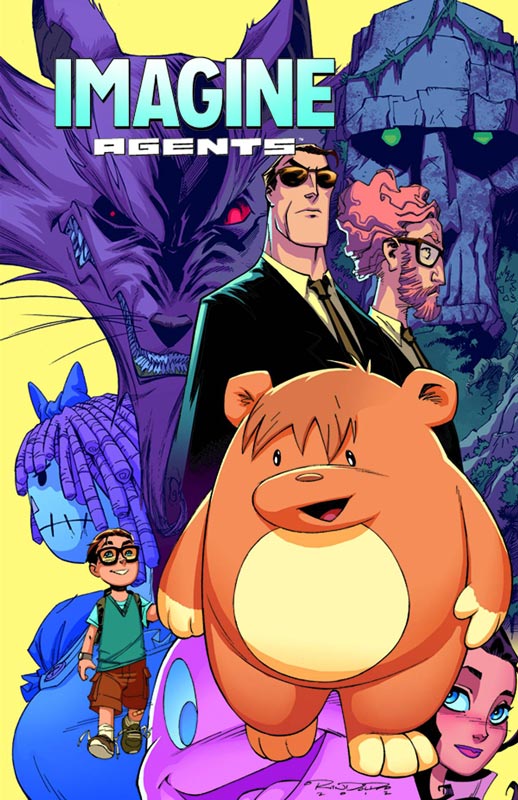 While flipping through the first issue at the comic store I was intrigued by the art that had a nice blend of serious and cartoony art. The plot synopsis from Boom! is, Ever try to wrangle an illiterate, 30-foot tall rock monster away from his 5-year-old best friend? Or calm down a 400 pound muscle-man rag-doll during her daily temper-tantrum? For Dave and Terry, it’s all in a day’s work. As agents for I.M.A.G.I.N.E., they are responsible for keeping your imaginary friends in-line… Little do they know that six-year-old Elliot and his best bear-friend, Furdlgurr, are about to be entangled in a plan to change everything! The premise of the first issue reminded me a little too much of Men in Black hunting imaginary characters instead of aliens. While I was not bowled over by Joines story in the first issue it did have enough to get me to visit for a few more issues. The key for me is where Joines takes the direction. The story needs to find its own voice and not tread on all to familiar ones. Bachan’s art is nice and while overall has a bit of cartoon style, I do wish that the human characters were a bit more straightly drawn compared to the imaginary ones. It’s a minor quibble and the art is overall nice and there is a good amount of detail and backgrounds to it.

Is this book worth your time and money? It’s too early to tell. While not a bad book by any means I just hope that it brings something new to the table. The first issue does suffer from been there and seen that before. Hopefully in a few issue they are able to keep me interested and find an original hook for the book.