Based on the comic by Brian Michael Bendis and Michael Avon Oeming after a failed pilot at FX network Sony decided to make the series exclusively for the Playstation Network. The show stars Sharlto Copley as Christian Walker, Susan Hayward as Deena Pilgrim, Eddie Izzard as Wolfe, Noah Taylor as Johnny Royalle, Michelle Forbes as Retro Girl, and Olesya Rulin as Calista Secor.

The plot is, Powers, an edgy dramatic series, follows the lives of two homicide detectives, Christian Walker and Deena Pilgrim, who are assigned to investigate cases involving people with superhuman abilities, referred to as “Powers.” Set amidst today’s paparazzi culture, Powers asks the questions, what if the world was full of superheroes who aren’t actually heroic at all? What if all that power was just one more excuse for mischief, mayhem, murder, and endorsement deals? Enter the men and women of the Powers Division, the brave people in charge of protecting humans like us and keeping the peace over commercialized, god-like men and women who glide through the sky imposing their power over the mortals who both worship and fear them.

There is a lot riding on this show for both Sony and Playstation because it’s the first original scripted series for the Playstation Network and with the hugely successful comic series the television show has a lot to prove. So with such wight on the show one would have hoped for a better show. While not a complete disaster the show get off to a slow and uninspiring start. 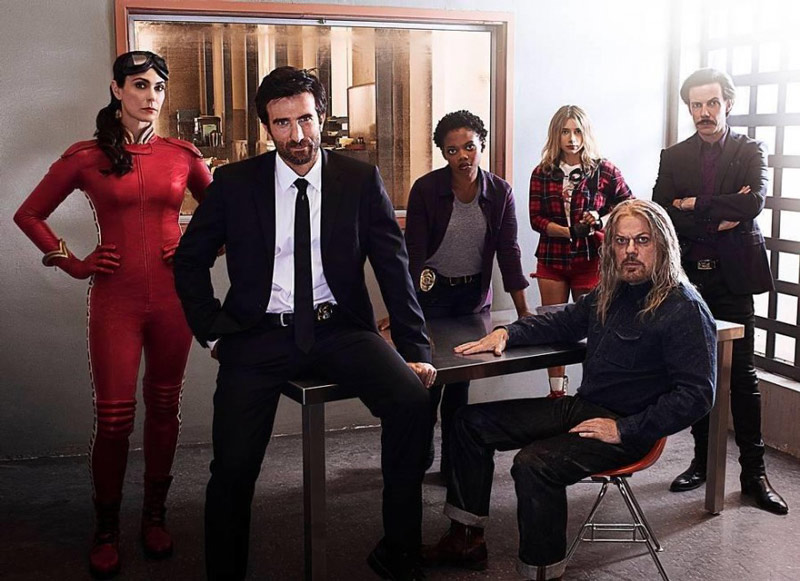 The pilot is a real mess both ins story and visually. The show runs too long (55 minutes) and while I understand the show is not going to have the biggest budget the pilot looks simply awful. Written by Charlie Huston and directed by David Slade has all the excitement and drama of a high school play. While the cast for the show is good you would be hard pressed to see it here. It’s one thing to have a limited budget with your locations and sets but a strong cinematographer can do wonders with those limitations. Sadly Director of Photography John Lynch makes the pilot look like a fan made film and simply looks terrible. The story plods along and there is very little for the viewer to care about any of the characters. Where the comic source material has strong story to it Huston brings none of the charm or drama from the comic and all that we are left with is a standard buddy cop show with cliché superhero elements.

The minor good news is that episodes 2 and 3 are marginally better. Jan Richter-Friis takes over as the cinematographer and is a huge improvement over the pilot. Slade directs the second episode and David Petrarca directs the third. Huston writes the second episode with David Paul Francis writing the third episode. While the next two episodes have some minor improvements the biggest issue so far with the show is the real lack of strong character driven stories. It’s one thing when you have a ton of money to throw at a show like Terra Nova but they both fall into the same issue that unless you have strong story and characters then no matter how much or little your budget is the show will not be worth watching.

The second and third episode still suffers from pacing and focus issues but at least the cast is able to save some of it with attempting to deliver the script as best they can. The biggest problem that I have with the show is the general lack of much happening. I get that you don’t what to blow your wad too soon but so far there is not much of a connection between me and any of the characters. My rule of thumb when watching a television show, movie or reading a comic is if an airplane came crashing into the story would you care if everyone died? So far I don’t wish for an airplane to hit the show but wouldn’t care if it did either. 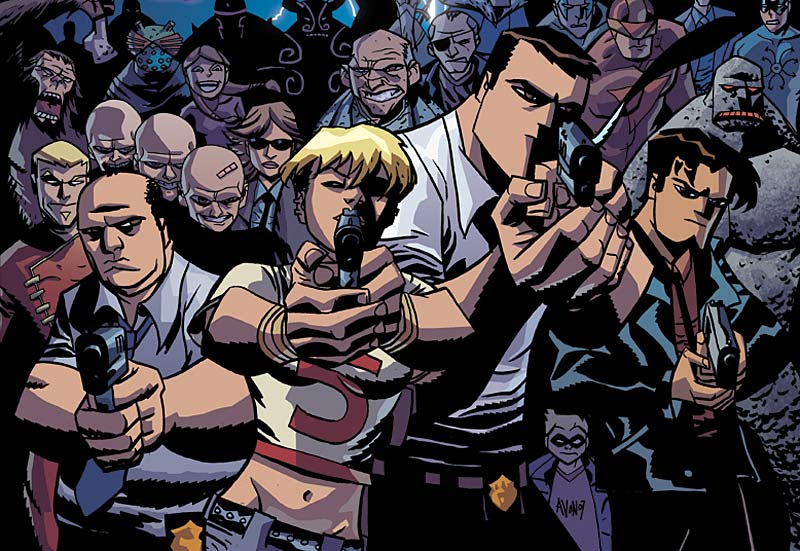 I think there is some minor hope for the show in the fact that each episode has improved and the ending of the third episode does look to hopefully take the show in a stronger direction with the story. I just wish that the rapid-fire dialog and the odd couple buddy cop chemistry that made the comic so much fun will make a much-needed appearance in the show very soon. The cast is really strong and is keeping this whole show from being a huge mess. I think that so far that Susan Hayward is the real break out of the show. She brings a lot to Deena Pilgrim and is very impressive considering the constraints of the scripts so far. Getting Eddie Izzard as the villain Wolfe is a real win for the show and at the end of the third episode you get a glimpse of what he can bring to this show. Thankfully there are no weak links in the acting side of the show and that is a real saving grace for it.

There are two nagging issues that I have with the show. First at this point in the game a television series that is very average at best is just not good enough anymore. There are too many good television shows on now and you shouldn’t waste your time on an average show like Powers. And second how is the fact that the strong comic that this show is based on is so mediocre compared to it. I understand the budget issues but there is no excuse for the scripts to not be as strong as the source material. 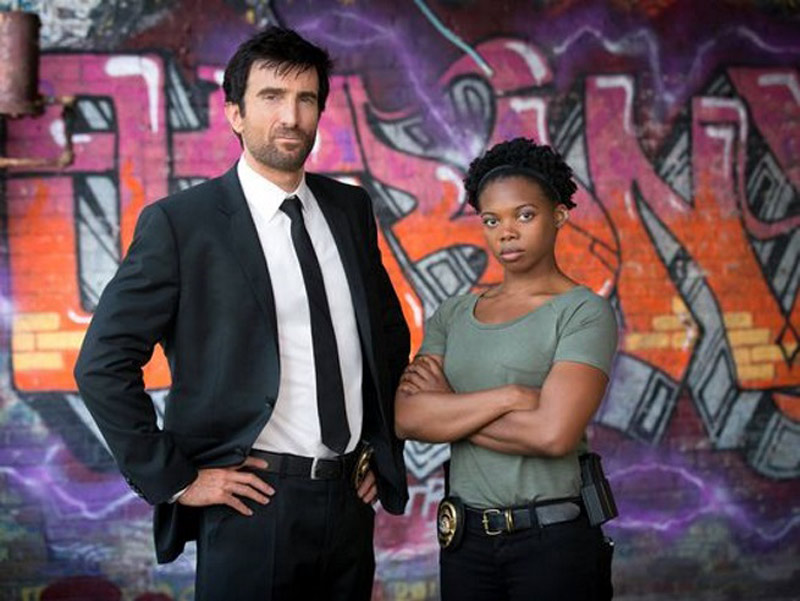 The show is watered down from both its original comics and other current television shows. The biggest failure of the show is to be innovative or fresh. It almost feels like a show that was done in the late 1990’s or early 2000’s and has been stuck in a vault and is now just being released.

So is it worth your time and money? If you are a current Playstation Plus subscriber then the entire season is free for you but if not the series will set you back $24.99 and at that price you would be a lot better off just buying the collections of the comic that is better (so far) than this television adaption. I will continue to watch the show because I am getting it for free and at that price I guess that I can sit for 45 minutes each week to see if there is any improvement of the show. 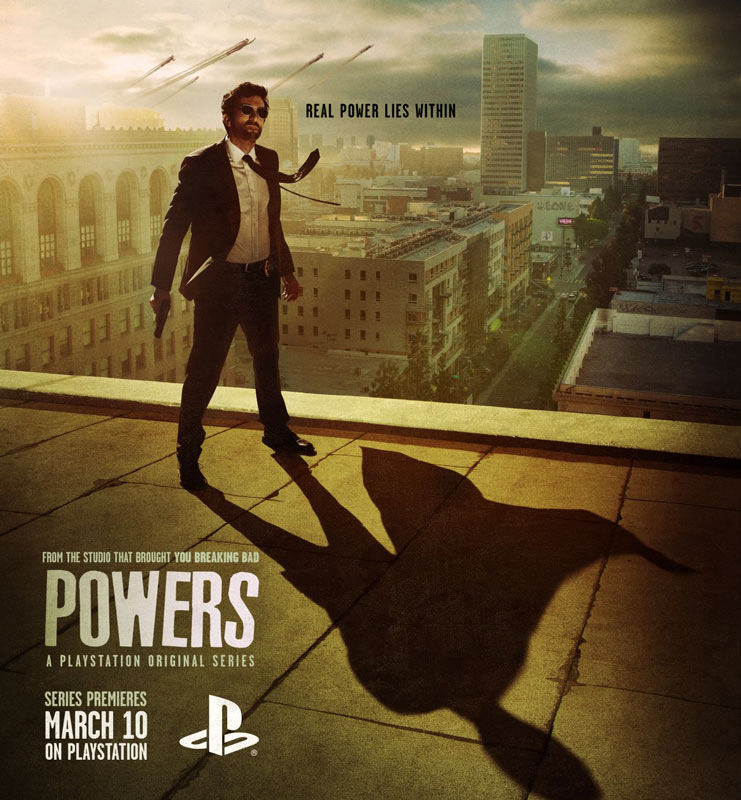