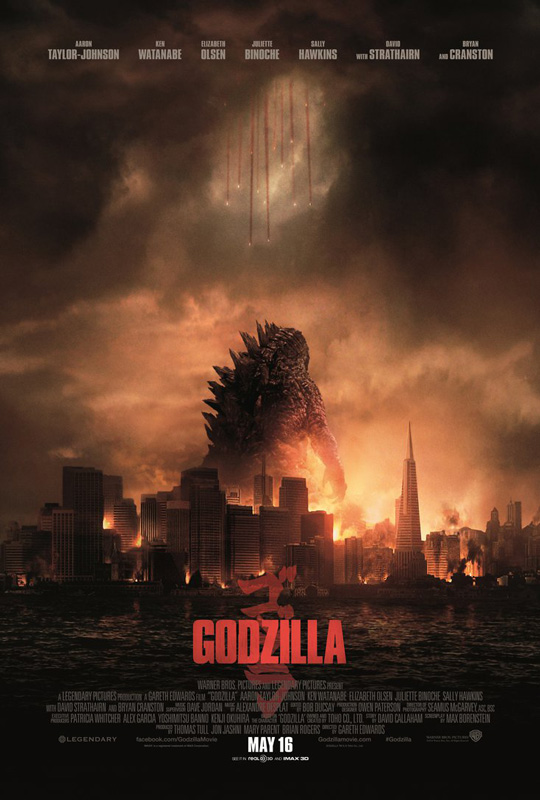 NOTE: IF YOU HAVE NOT SEEN THE NEW GODZILLA FILM THERE ARE SOME MILD SPOILERS BELOW. YOU HAVE BEEN WARNED!

So the new Godzilla 2014 film has finally hit theaters and while the movie did very well in its opening weekend by scoring a whopping $93 million dollars but there now seem to be a bit of a backlash over the lack of screen time that Godzilla has. The irony is that the original 1954 Godzilla was on-screen for only about 17 minutes of its 96 minute running time. The other thing that got me thinking was that last year Legendary Pictures and Warner Bros released Pacific Rim (who also did Godzilla 2014) that had tons of monster on robot action and yet for the most part audiences did not seem excited to see the film and was not a huge box office success. For the record I was a big fan of Pacific Rim and was the best Godzilla “type” film in years. Now a year later and it seems the biggest complaint of Godzilla 2014 is the lack of monster on monster action. While I understand that people are more familiar with Godzilla compared to Pacific Rim being an original project, it makes me wonder what people really want. The thing that I really enjoyed about Godzilla 2014 is the way that they lead up to the big battle in the last act with Godzilla and the two M.U.T.O.S. If you had done a bunch of battles before that, it would have lessened the impact of the final battle. 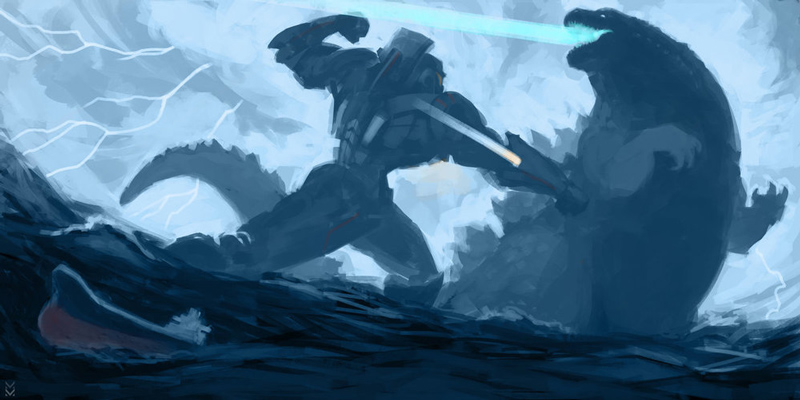 Screen writer Max Borenstein defended the controversial idea of not revealing Godzilla too soon and they used Steven Speilberg’s 1975 Jaws as inspiration.

“It’s done less these days because CGI has allowed us to show whatever we want when we want,” he says of delaying big reveals. “There was something great about the suspense that was built up when you didn’t see Jaws in the full until the end of the film. … By doing so, that movie becomes incredibly suspenseful, and perhaps it’s the reason Jaws 2 becomes a lot less interesting, because you see him right from the very beginning.”

He also talked about the decision of how long it would be before you would see Godzilla on-screen and he had this to say.

It’s a balance between suspense and reveals. People are going to react differently to it. There are people who will appreciate a slow build, and there are people who are going to want Rock ‘Em Sock ‘Em Robots from the very beginning. It’s a matter of taste and a matter of choice. It’s done less these days because CGI has allowed us to show whatever we want when we want. There’s no longer the necessity of withholding, but necessity is the mother of invention. There was something great about the suspense that was built up when you didn’t see Jaws in the full until the end of [Jaws]. There are all these creative and interesting things you can do without showing all of him. By doing so, that movie becomes incredibly suspenseful and perhaps it’s the reason Jaws 2 becomes a lot less interesting, because you see him right from the very beginning.

Borenstein also talked about the fact that Godzilla is not necessarily a monster and a bit of a hero in the film.

In the very first Godzilla film, he’s not exactly malicious. He’s really like a force of nature and we don’t understand his motivations at all. Later on, he becomes so much of a hero that it verges on campy in most of the Godzilla films, where he becomes protector of Japan and fairly anthropomorphic. We went for a version where we treated him as a real animal. It was the idea that Godzilla is interested in his own life cycle. He is perfectly comfortable at the bottom of the ocean where he lives out his days. But things that we’ve done on the surface of the Earth have upset the balance and resulted in him coming up. It’s not that he’s coming up to punish us – although that’s how it plays out – he’s coming up because the balance has been upset. If you have a dog who is sleeping somewhere and you open a tin of meat, it’s going to sniff that and come.

Another film comes to mind that does not reveal the monster too early in the film and that is Predator. It is a while before you actually fully see the Predator and no one seems to complain about that in the film.

For me the key scene that works for me is the Hawaii first reveal of Godzilla. I thought it was brilliant to shift to from the battle to Sam Brody watching it on the television and his mom not even noticing what he was watching. While I do understand that people were frustrated with this choice there was another reason I think. Today most people view the world through their phone or other device and never actually see what is happening in front of them. So that is why Sam is not scared of what he is seeing and most people would have seen the battle the same way if they were there because they would be filming it. I laughed out loud at the scene because I got what they were trying to convey with the scene.

The other thing that people seem to not notice in the film is that Godzilla is sort of mother nature type force. In fact there are a number of times that he save people from themselves. Take the Golden Gate Bridge scene. The military is firing missiles at Godzilla but is doing more destruction to the civilians than him. At one point he puts up the spikes on his back to stop the incoming missiles. Also after the final battle he does not do any more damage to the city or the people when he leaves San Francisco to the Pacific Ocean. This goes back to Borenstien talking about him being a force of nature.

In contrast there are no shortage of battle scenes in Pacific Rim. I would say that a good 40% of the film is battle scenes of some type. And yet people mostly gave the film a cold shoulder when it was released. So I am curious if the same people who are complaining about the on screen time for Godzilla actually saw Pacific Rim? That film delivers on the whole monster on monster action and nobody showed up.

The problem today is that most of the Hollywood blockbuster $200 million dollar blowout fiestas are mostly about crap blowing up. So far the first two summer blockbusters Captain America 2 had lots of stuff blowing up like three helicarriers. Then Amazing Spider-Man 2 had Electro blowing up New York Cities power grid that look more like a video game than a movie. The problem now is that tent-pole blockbusters are all about the CGI seizure inducement than trying to tell a story. While Godzilla 2014 script is not art by any stretch at least it tried to tell a story and have some characterization to it. It is so very rare that blockbusters like Gravity and Nolan’s Batman films center on story over spectacle that they are the exception and sadly not the norm. If you look back to blockbusters of the past you had both spectacle and story like JAWS, Ghostbusters, Back to the Future, Superman The Movie, Empire Strikes Back, Raiders of the Lost Ark among others. 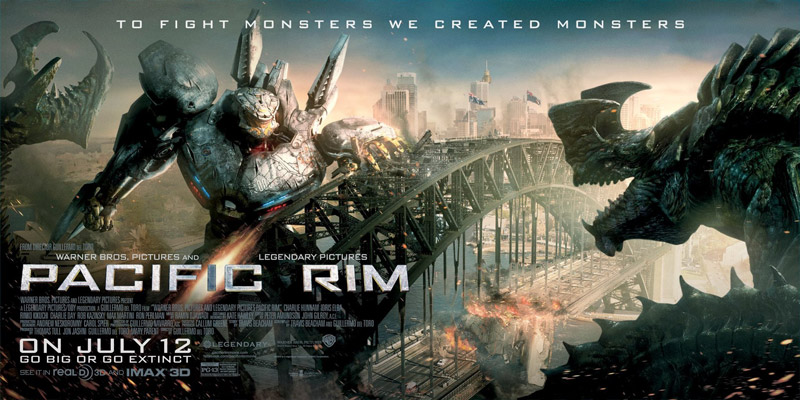 I am not saying that Godzilla 2014 is the most brilliant film by any means. I’m just saying that for me was very refreshing to see filmmakers make a film where all of the mystery is not revealed too soon and too often in a film. Unfortunately most of today audiences have been weaned on Transformers, Independence Day, The Avengers and Man of Steel where destruction is the norm and story has very little point beyond moving the story to the next battle scene. I hope that the same creative team work on the inevitable sequel to Godzilla and keep the same tone to that one too. It’s hard to have a good story in a $200 million dollar blowout and there will still be very few of those made in todays Hollywood studio system. I just hope that the thing that Godzilla 2014 did best was not to give it all away too soon because it was very refreshing for me.

For fun I have found two different size charts. One for the different Godzilla’s and one for Robots in film. 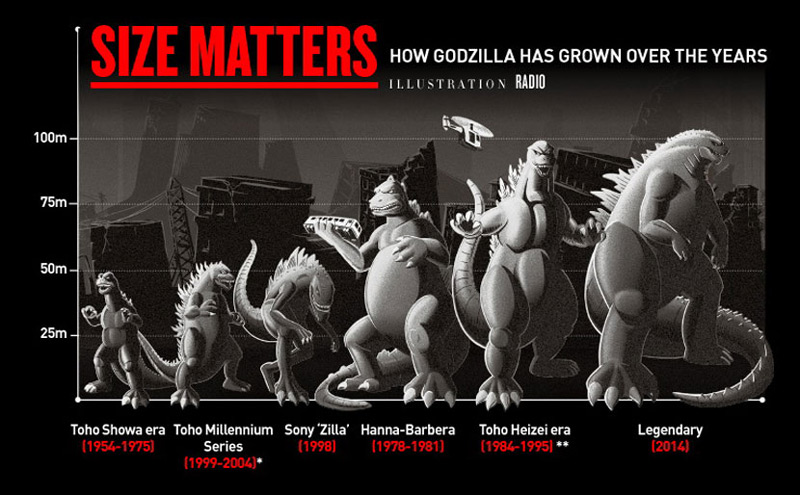 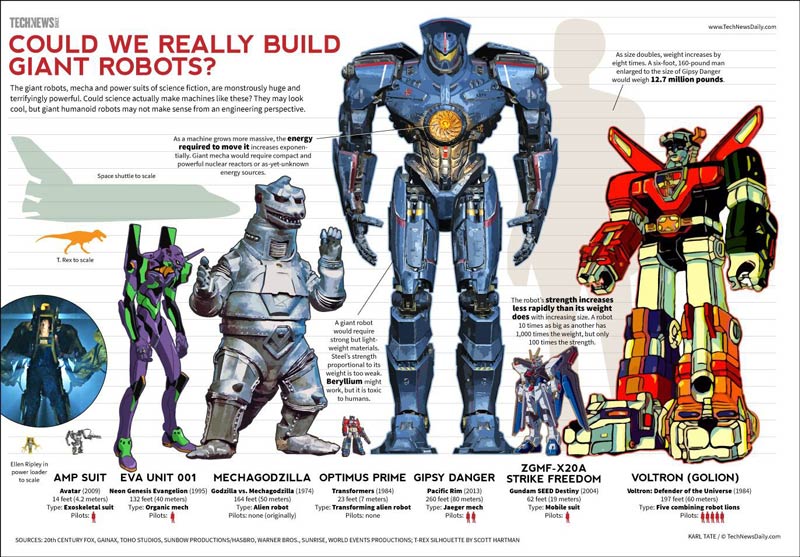 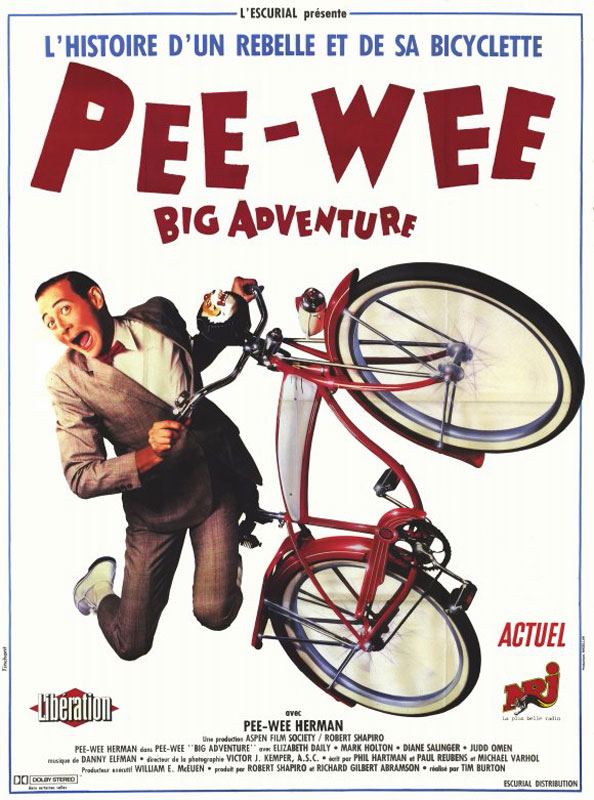