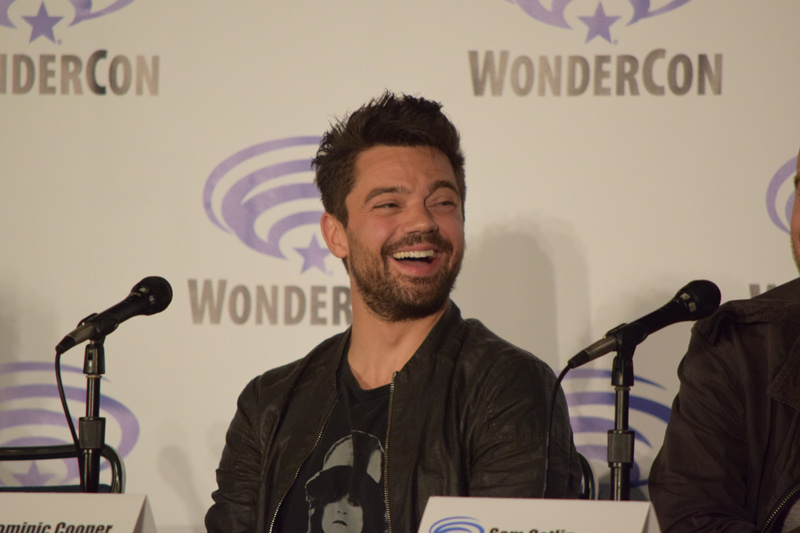 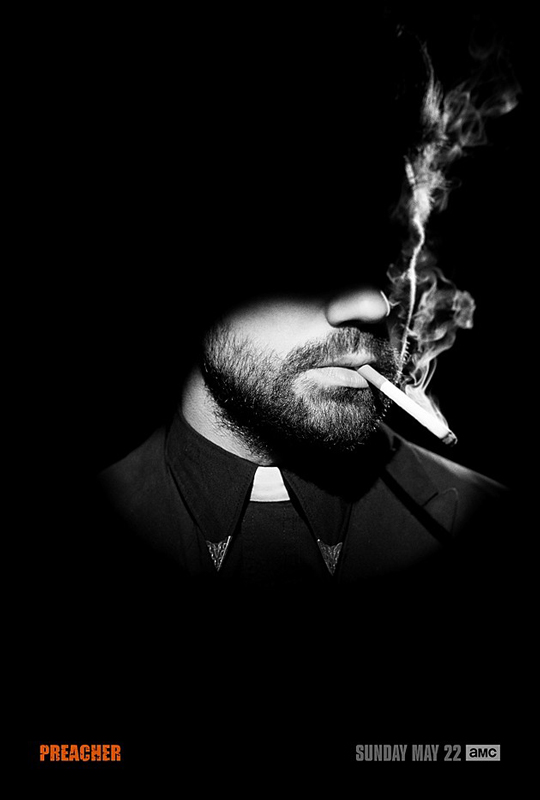 While the premiere of Preacher on AMC hits next week, I was one of the lucky few that got to see an advance screening of the pilot at WonderCon back in March and to say that it blew the audience away was an understatement. The long time coming series after many false starts as a film or television series finally sees the light of day and is well worth it.

While this was not the first public screening (that was SXSW) this was a tough audience to show it to because we were hardcore readers of the comic series and so they really had to bring the goods to please us. Based on the Garth Ennis and Steve Dillon Vertigo Comic of the same name the new AMC show delivered not only a great adaption of the comic but the pilot fleshes out the comic to a wonderful cinematic drama that could and should be a huge hit. I dare say that I enjoyed it more than the Walking Dead pilot. 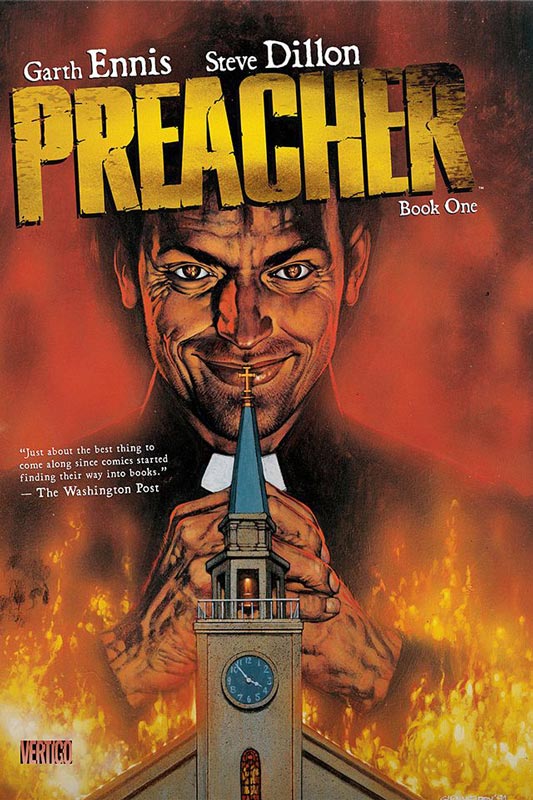 My review will be mostly spoiler free but may include some plot points but I don’t want to ruin the enjoyment of the pilot. The basic plot of the show is, Jesse Custer (Dominic Cooper) is a conflicted preacher in a small Texas town. He is inhabited by a mysterious entity that allows him to develop a highly unconventional power that They allow him, when he wills it, to command the obedience of those who hear and comprehend his words. Along with his ex-girlfriend Tulip (Ruth Negga) and an Irish vampire named Cassidy (Joseph Gilgun) and local boy with a birth defect Arseface (Ian Colletti), Custer embarks on a journey to literally find God. Comic adaptations are always tough but Preacher strikes a great balance between the two. 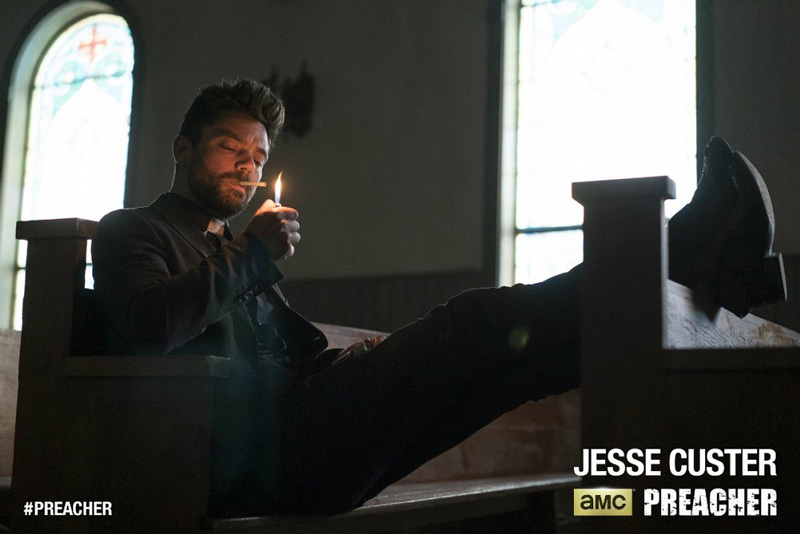 The pilot is one of the best I have seen in a while and is great for both fans of the original comic series and new viewers alike. The pilot follows the basic structure of the comic and yet makes it different at the same time. The script does a great job of introducing each of the main characters,  and while Custer gets the most screen time the other main characters all get great introductions. The pilot directed by Evan Goldberg and Seth Rogen with a script by Rogen, Goldberg and Sam Catlin hits all the right beats while being very well paced. The pilot ran about an hour and a half and was very well paced considering the amount of exposition that it had to get through. The pilot doesn’t follow the comic exactly but uses it as a structure for the series. The best way to put it is the same way that The Walking Dead follows the comic but yet is able to go its own way because of the difference with its visual medium. 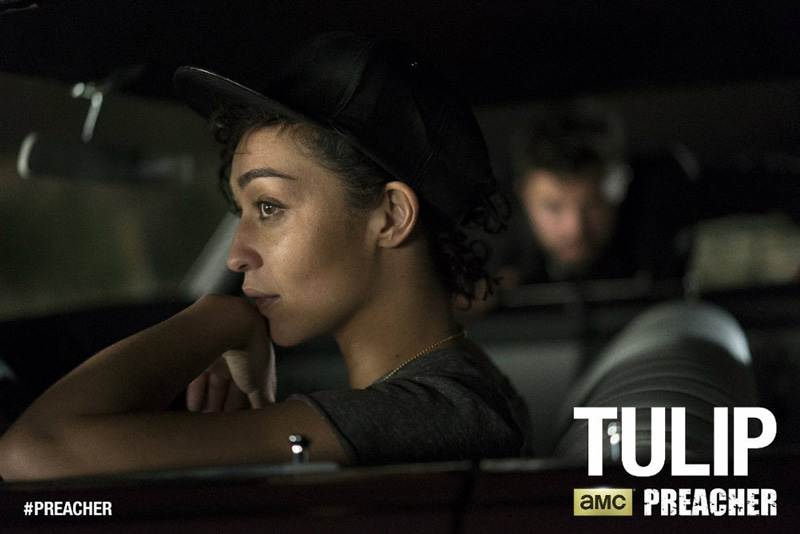 This become very evident with the introduction of Tulip and Cassidy in the pilot. With out giving anything away seeing Cassidy in action for the first time is a really fantastic action sequence that shows that the series is willing to go pretty far with the violence. The pilot didn’t pull any punches with its willingness to go to the edges but yet never feels gratuitous or out-of-place. The one thing that is also very much in-tacked is the dark humor that Ennis is so good at in the original comic and this is very evident with Tulip who is as funny as much as she kicks ass in the show. 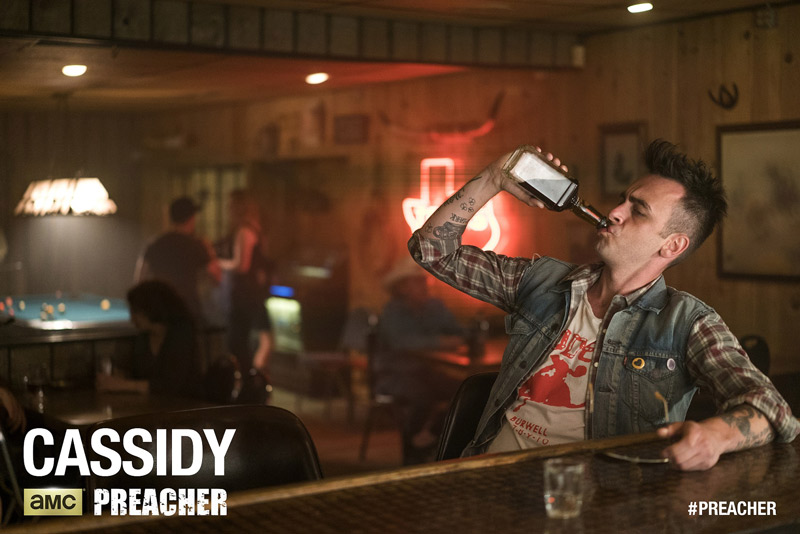 One of the big challenges was how the show was going to pull off Arseface and thankfully the makeup effect is quite impressive. While it was pretty easy to understand him the show wisely did subtitle his dialog to make sure that the viewer wouldn’t miss anything. While the look isn’t exactly like the comic it does work better for the show with the way that they did it. It still allows you to get a better range of facial expressions that would have not been possible with a full face prosthetic. 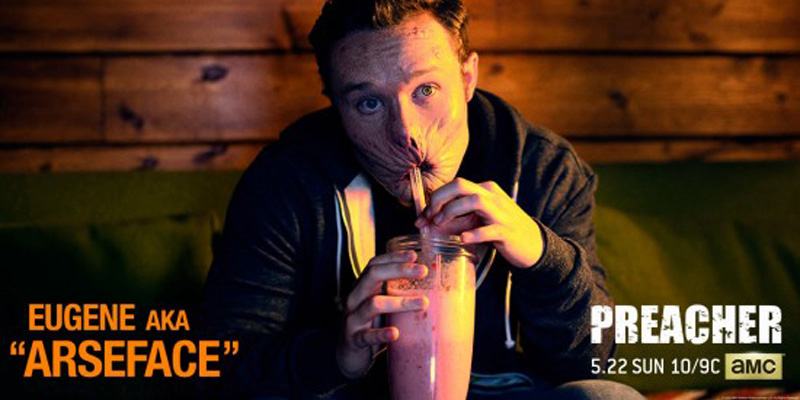 Overall the Preacher pilot is very strong and does all of the right things that a good pilot should do and nails the tone and feel of the original comic and yet brings new things because of the amazing cast and things that a television show can do visually different from the comic. It also introduces a lot of the mystery plot elements that will be revealed in later episodes that will bring views back for more. Honestly I can’t wait to see the pilot again and go through and discover some of the more subtle elements that you tend to miss on a show that has a lot going on. 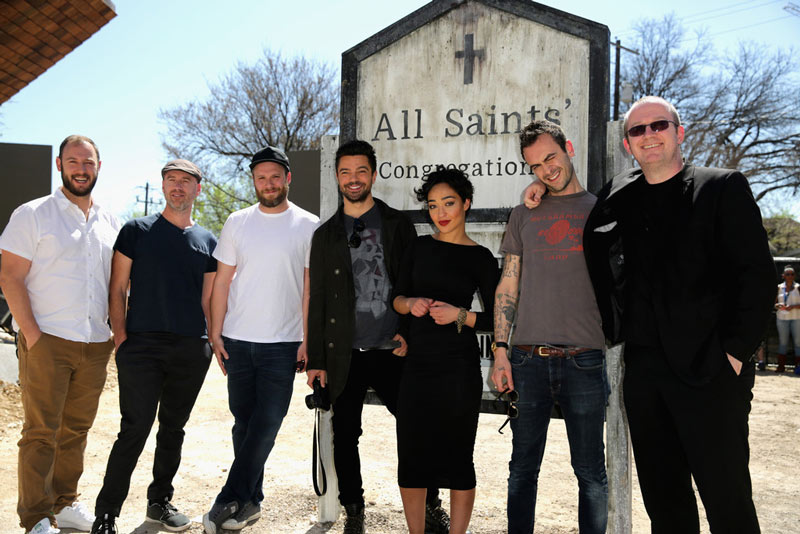 The show is perfectly cast with Dominic Cooper being the perfect Preacher and brings a lot to the table with the role. He really embodies Custer and is able to capture all of the nuances that the character is and will be. Joseph Gilgun as Cassidy handles both the badass and the humor that make him so lovable in all of the wrong ways. 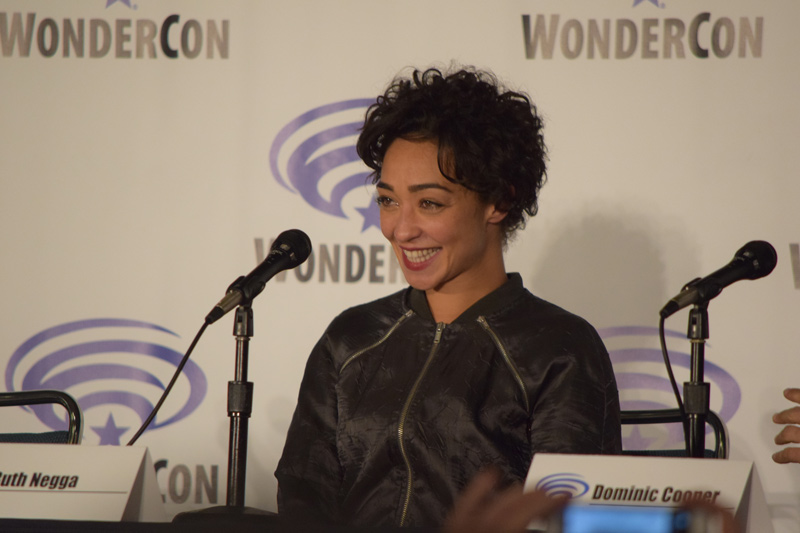 Probably the biggest surprise was Ruth Negga as Tulip who was very impressive and really captured her in a way that was very different from I would have imagined her but she really makes Tulip her own and I’m glad they went outside the box with casting her.

While Ian Colletti as Arseface didn’t have a lot of screen time in the pilot I have to give him huge props for being able to give a strong performance with the huge amount of makeup on his face. He is going to be the one to watch for and I am really excited to see where he takes Arseface in the coming episodes. 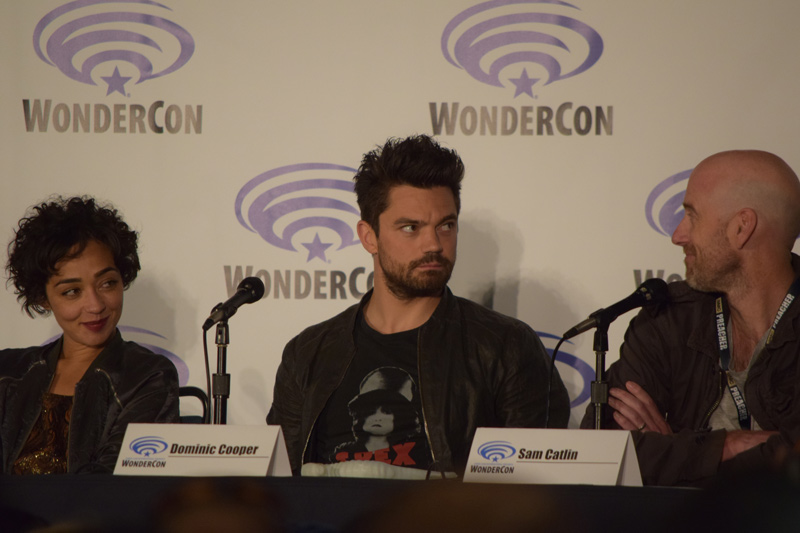 After the screening producer and write Sam Catlin, stars Dominic Cooper and Ruth Negga talked about the show and there was a short Q&A. We learned that Rogen and Goldberg were huge fans of the comic and while Catlin had never read them he immersed himself in reading all of the source material to better understand why they were so enthusiastic on the comic. Both Cooper and Negga also became fans of the comic and are looking forward to finding more about their characters in upcoming episodes. Catlin was asked if the show would follow the comic or go in its own direction and he said that with 75 issues of the comic there is a lot to mine from it and what would be the point of not following it. 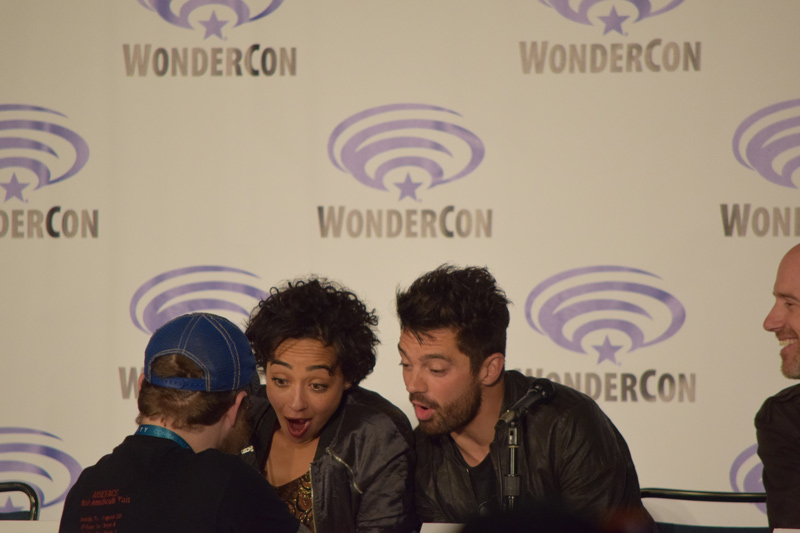 One of the best things was a guy who had a full arm tattoo of Preacher and the supporting cast and Cooper and Negga were blown away by it. 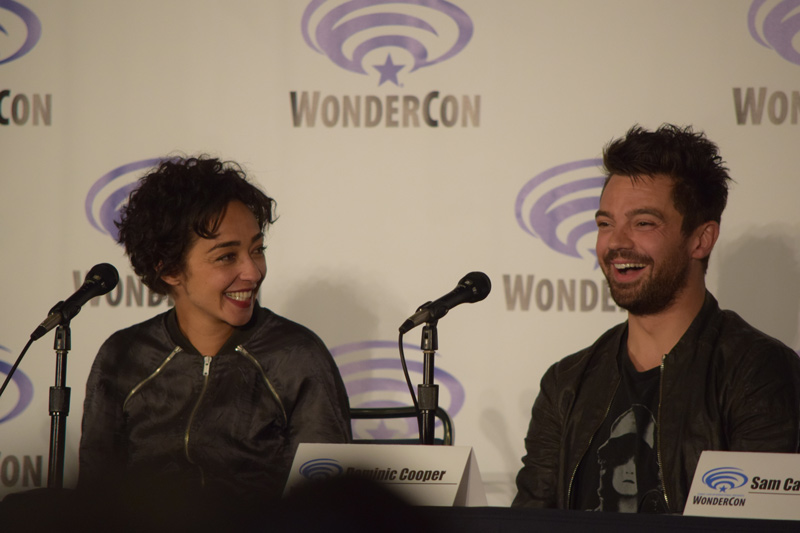 They were all really happy to see the response of the pilot with people who were familiar with the comic. Catlin went on to say “We wanted to do Garth Ennis Preacher, We never had any interest in doing an approximation of that. Obviously, we have a different starting point from where we start with Jesse. But everyone wants to do Garth’s ‘Preacher.’ It’s really our Bible, it’s our road map — that world, that crazy, fucked up, upside-down world, why do anything less than that, unless someone says no? And no one’s said no so far.” He stated that AMC has been very supportive of the show and they haven’t gotten any notes from the network. 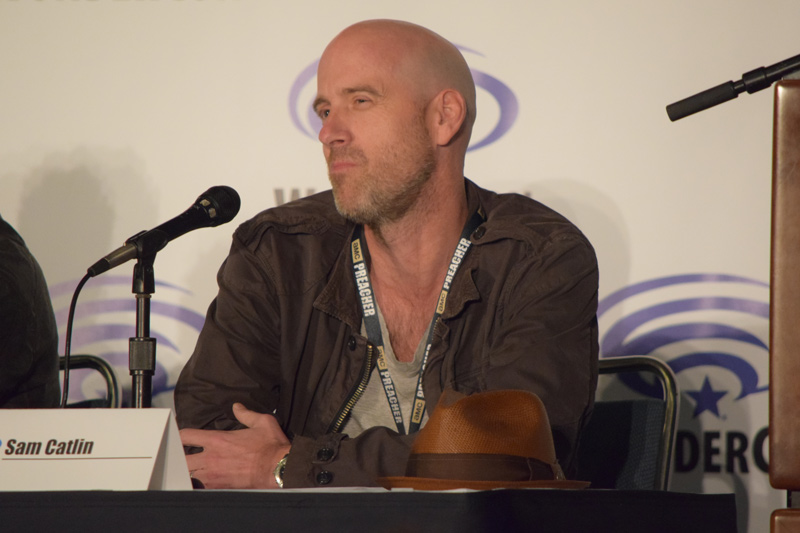 The room was packed and the response to the pilot was very favorable. There were lots of cheers and laughs and it played very well to a crowd that expected a lot from the show. I hope that the show will find an audience and AMC is doing a good job of getting the word out on the show with trailers and promotion during The Walking Dead. I was very impressed with the pilot and can’t wait to see where the first season goes following this very strong pilot. I HIGHLY RECOMMEND watching the show when it premieres May 22 on AMC. 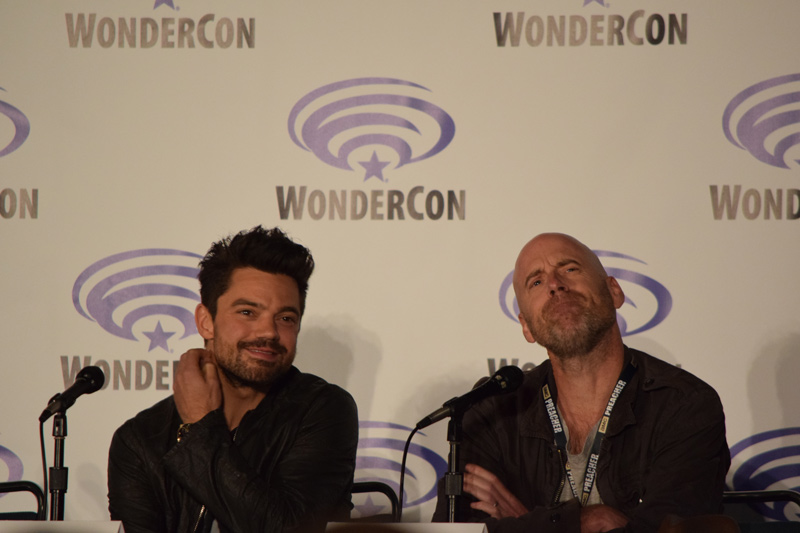 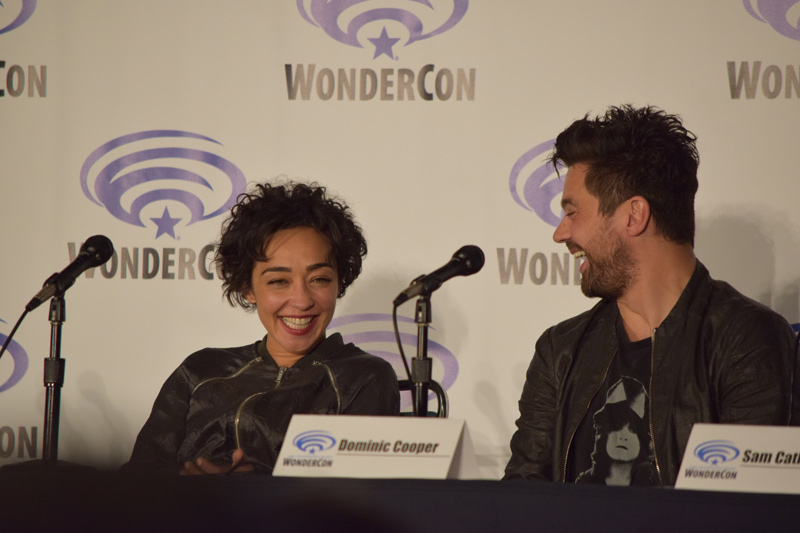 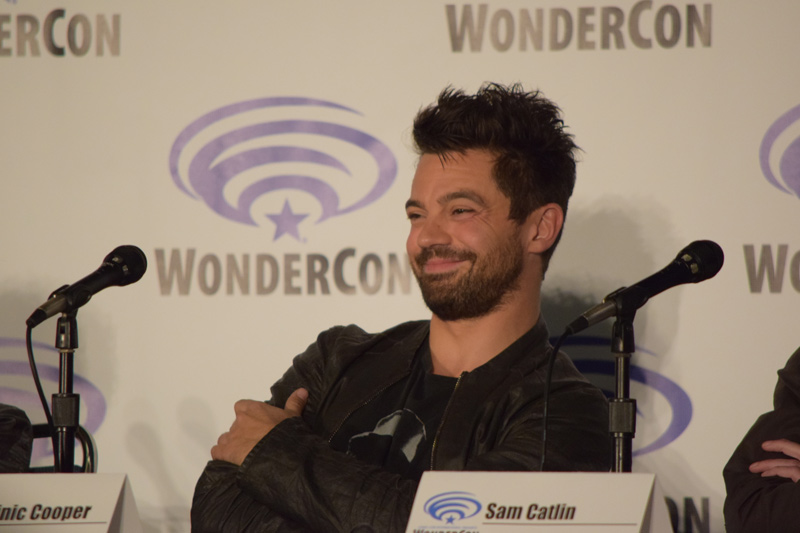 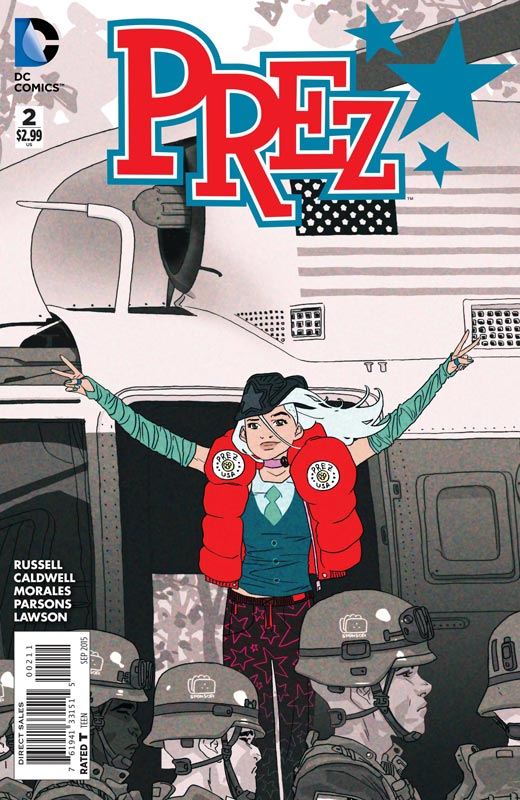 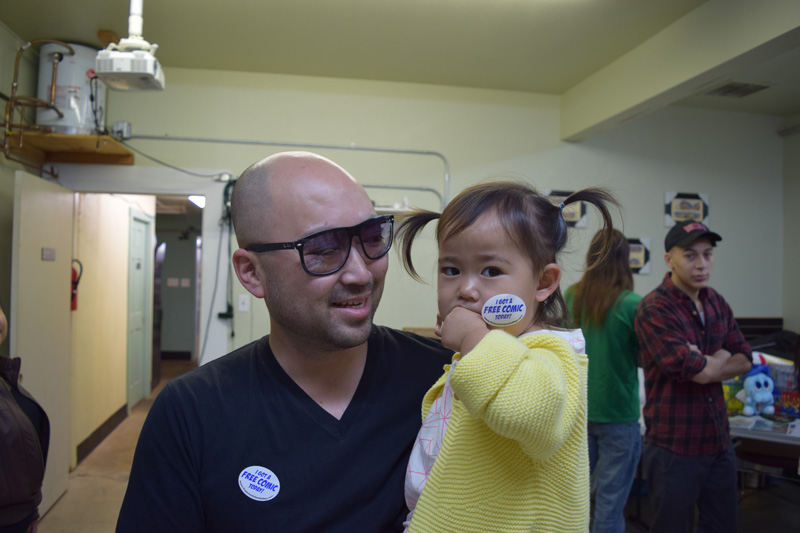