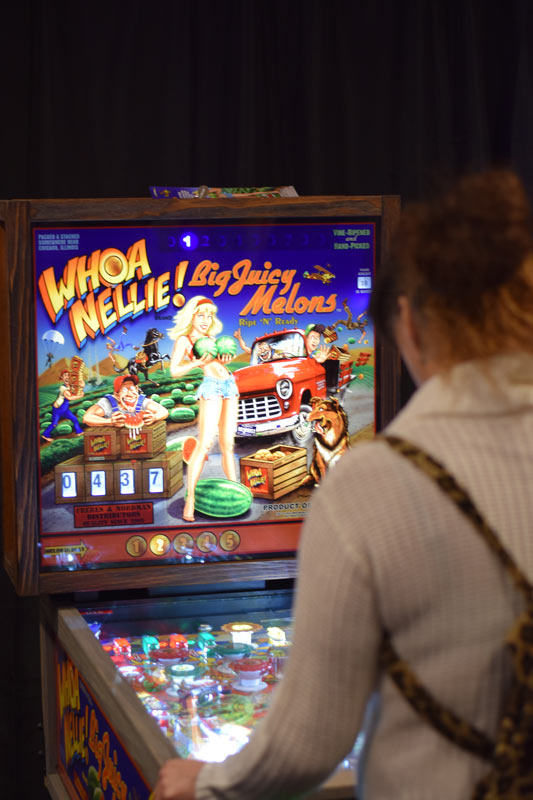 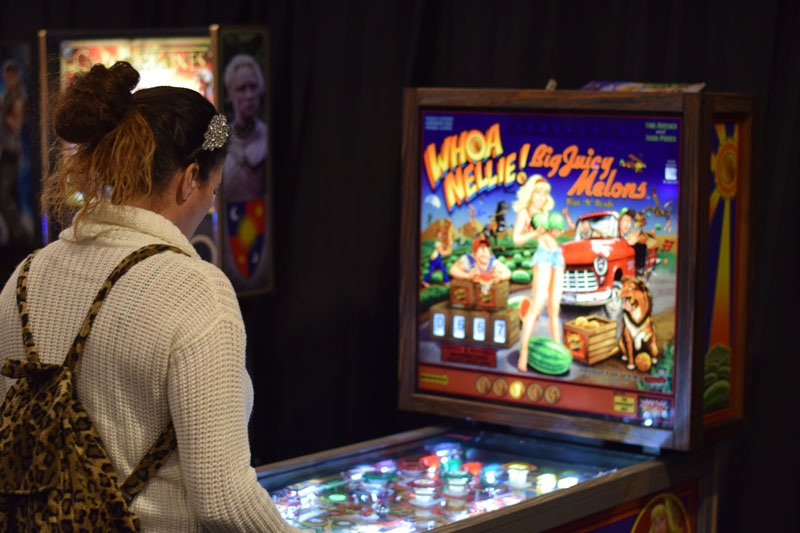 At Arcade Expo 2.0 pinball parts supplier Marco Specialties was on hand in the tent area and not only had pinball parts to buy but they brought six new Stern pinball machines set to free play. They included both versions of Game of Thrones, KISS, The Walking Dead, Wrestlemania and a very odd machine named Whoa Nellie! Big Juicy Melons. My friend and pinball expert Glenn told me that the machine was based on the 1957’s Gottlieb’s Continental Cafe pinball machine the information from the Internet Pinball Database has the following on the original prototype machine. This is a converted game using Gottlieb’s 1957 ‘Continental Cafe’ and with its rules slightly adjusted. A new backglass and playfield were created. Three units were made using a solid state “Pinkit MPU” and one prototype was made using an EM score motor. All four games used four score reels. The Gottlieb serial numbers were retained and appear on the wood strip below the backglass at the top edge of the playfield. The prototype EM and the first SS game were completed within days of each other in October 2011. The machine was massed produced by Stern in March of 2015 and this was the version that was playable at the Arcade Expo 2.0 and I was very impressed with it. I will be the first to admit that I am not a big fan of the newer Stern pinball machines for a few reasons. First there is no originality to them because they are all based on licensed properties that is one of the big things that killed pinball’s back in the 1990’s. They are too loud and with the LED lighting are way too bright and I find it hard to play them for long periods of time. They also have too much crap on the playfield that make a lot of the goals too difficult to see because there are things on the field blocking them. There are a few that I do like such as Metallica and the Tron machines but I would rather play a Williams, Bally or Gottlieb from the 1960’s to the 1990’s over a newer Stern machine. What makes Whoa Nellie an interesting new machine is that it combines the classic elements of an electro mechanical pinball machine with some modern upgrades that enhance the play but still keep the great elements that make playing an electro mechanical so much fun. Whoa Nellie has a nice clean playfield that is very challenging and takes a lot of skill to get a good score. One of the biggest challenges is getting the ball back to the top to get the lanes to trigger the lights for higher scores on the melon bumpers. The LED lighting on the machine is some of the best that I have seen. Most of the time the lights are way too bright but in the case of Whoa Nellie the complement the playfield and now overpower it. Of course the biggest draw to the game is the design of the cabinet that is weathered fruit crates that give the machine one of the most unusual looks that I have ever seen for a pinball machine. While there is an option for standard legs for the machine, I would never understand why you would not use the crate legs because of the visual impact. One of the best assets the game has is a very simple rule set that makes the game very accessible to both seasoned and beginners. The newer Stern games have so many overly complicated rules and goals that are fine for a pinball pro but are quite intimidating to a beginner. Whoa Nellie fixes this with simple but very challenging goals that made the game so fun to play. Beyond the unique cabinet the artwork on the playfield and the backglass by Freres is both retro and modern at the same time. At first glance you might think that the art is too racy or adult but if you take a closer look you get the tongue in cheek style of the artwork that is fun and humorous. The playfield keeps its classic electro mechanical feel with a nice color palate for the targets and bumper that blend together nicely with the artwork. The sound on the game is quite good with solid music score and fun dialog that can be set to sweet or sassy and adds a lot to the overall experience to the game. One of the things that I noticed was that the  Stern made games at the booth had headphone for the players that made them odd experience to play. While it allowed you to hear the music and voices better it really took away from the engaging experience of playing pinball. You didn’t have any problem hearing all of those elements when you played Whoa Nellie. 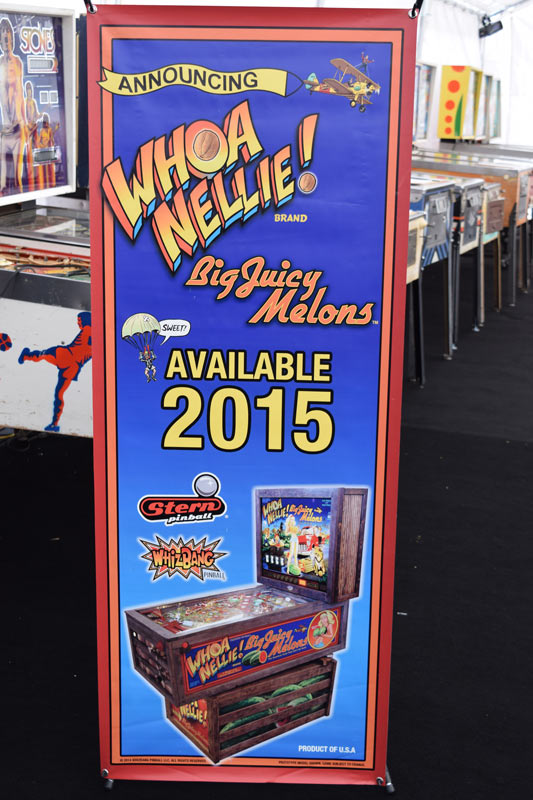 The reaction from the attendees to the machine was quite favorable. There were very few times that the machine was not being played and a lot of people played the machine multiple times. While it may not be as flashy as the new machines it did a wonderful job of blending the old with the new and makes for one of the most innovative pinball machines I have seen is a long time. While the $6,500 price tag is pretty steep for most people it will be interesting to see if the machine does well with the crowd that buys the newer Stern machines. The other question is will operators invest in a new machine that is not based on an existing licensed machine like Game of Thrones (Pro Edition $5,995, Premium Edition $7,595, Limited Edition $8,795) or an original one like Whoa Nellie?

Not only did I really enjoy the game I hope that is sells well for Stern for two reasons. First Stern need to look at what makes Whoa Nellie so good is that while it’s based on an electro mechanical machine the nice uncluttered and simple yet challenging design can make a really great playing experience. The other is the pure originality of the machine. While I understand that a licensed machine is attractive because the machine has a build in audience but if you look past the period of licensed games (mostly from Data East in the late 1980’s to 1990’s) that very few of them are memorable machines. Even the current crop of Stern machines are pretty forgettable and imagine if you ask an average person that might have played them I doubt that most would remember the gameplay or anything beyond the name of the machine. Whoa Nellie is hopefully a turning point for pinball machines going forward. I really applaud Greg Freres and Dennis Nordman for not only creating a really fun and exciting new game but they take a page from the past to hopefully bring that to the future of pinball.

Below are some of the other pictures that I had taken of Whoa Nellie from Arcade Expo 2.0 and hopefully Executive Director of the Museum of Pinball owner has purchased one of the machine so it will be playable at future shows. 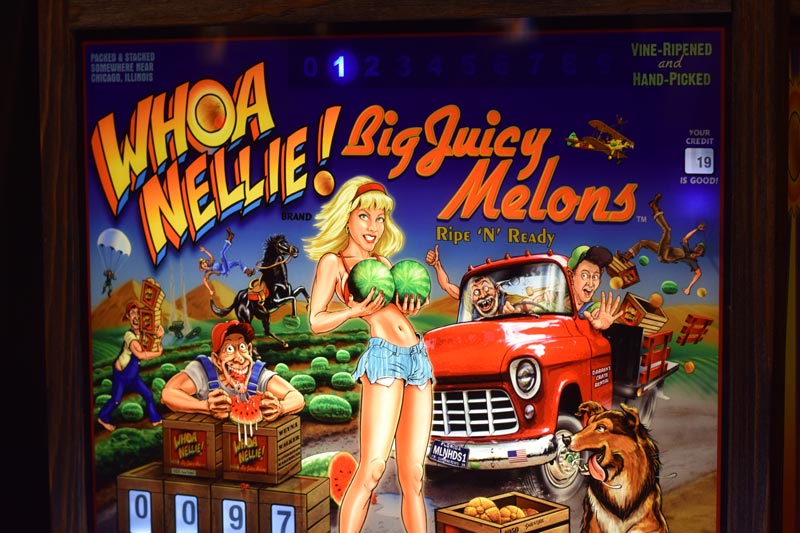