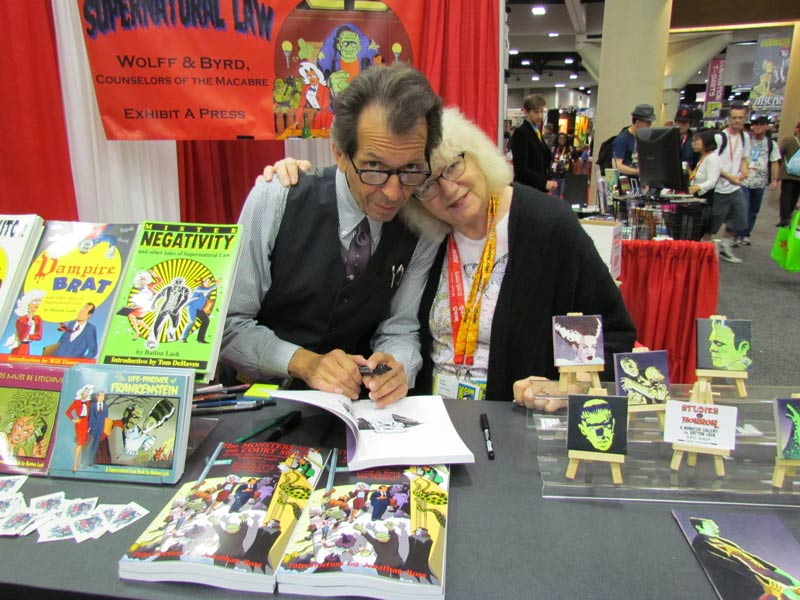 Jackie Estrada (pictured above with her husband Batton Lash) has been going to the San Diego Comic Con since the early days of the show and has been taking personal photos of the incredible comic book industry talent was there over the years. She has now collected some of the best into two wonderful hardcover book collections. Last year was the first release of the 1970’s and 1980’s and recently the second volume that collects the 1990’s. 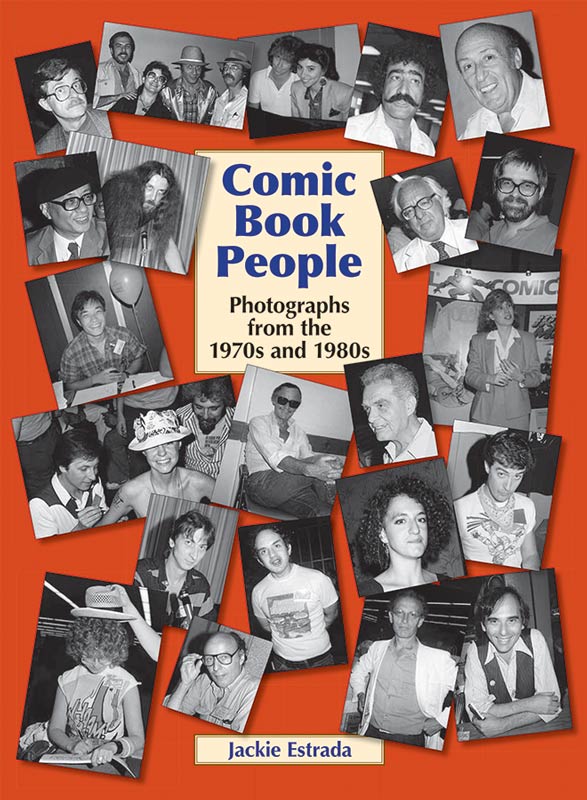 I have both volumes of the books and can say that they both are great additions to any serious comic book fans collection. My first SDCC was in 1983 back at the old convention center that was downtown and seeing the photos from that era really brought back great memories. I didn’t really take many photos back in the day so to revisit the incredible talent that was at the show is a really rare treat. There are very few photos from the 1970’s-1980’s period and it was a very special time when the rise of the independent publishing era was really happening. 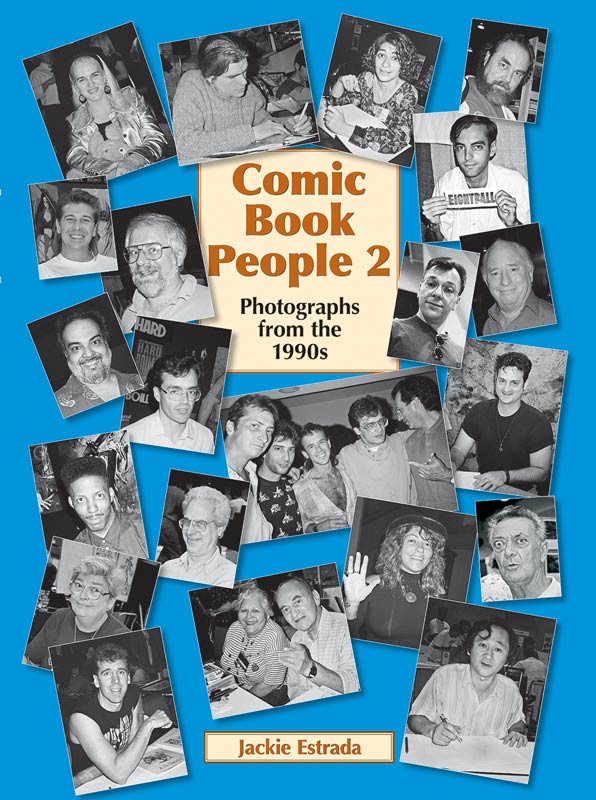 In the newest volume the 1990’s was a big growth period for the convention and the move to the new convention center in 1991 and the boom in the comic book industry. There are also some great photos from some of the other conventions that she attended during that period. There was so much going on during the 1990’s that it fills the book to the brim with great photos and anecdotes to give you background on them. The comic book industry had unprecedented growth during this period and there was a lot of new and old talent doing books. 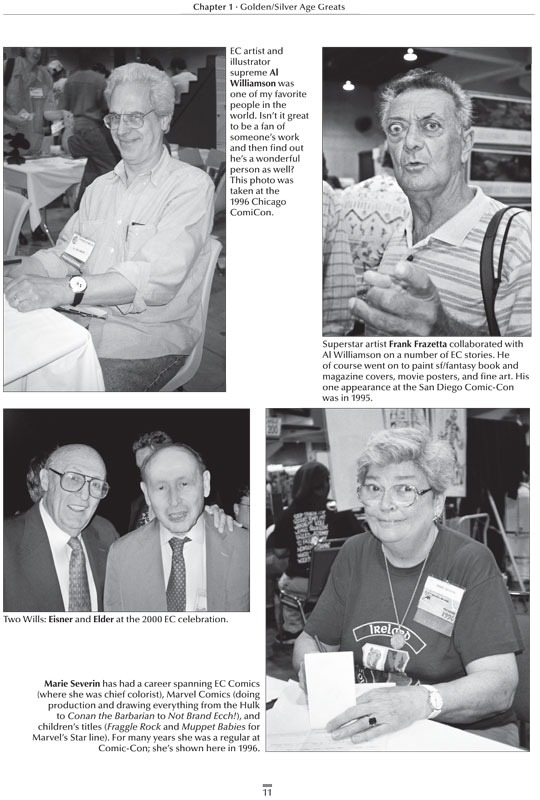 This Saturday at Meltdown Comics in Los Angeles Jackie along with some great talent that is in the new book will be at the store from 2pm to 6pm to celebrate the release of the book. Some of the scheduled talent will beScott & Ivy McCloud, Wendy Pini, Mimi Pond, Batton Lash, Tony Millionaire, Lea Seidman Hernandez, David Seidman, Dawn Brown, Bill Morison, Craig Miller, Michal Davis, Randy Reynaldo, Paul Power, Ruth Clampett, William O’Neill, Charles Hatfield, Brinke Stevens and many more! 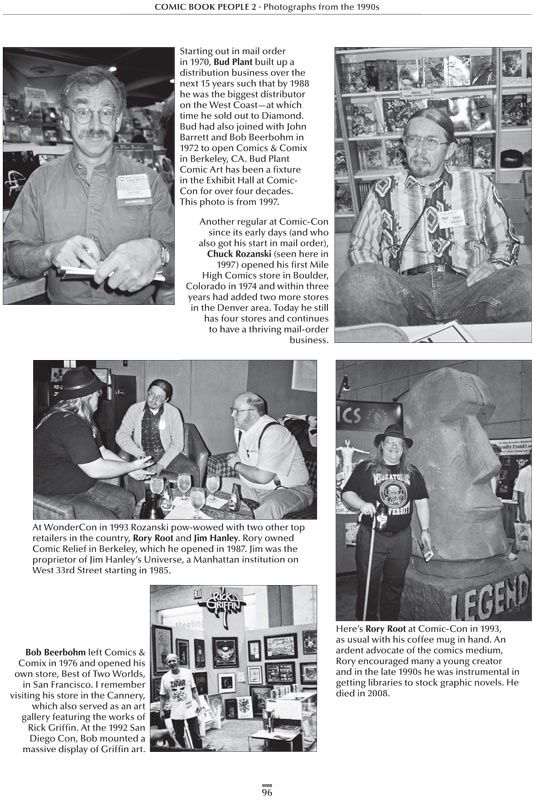 This is a rare opportunity not only to pick up the books and get Jackie to sign them but, you can also get some of the greats from the period to sign it also. You will be able to meet a great selection of talent that will also have their own works for sale. Normally you have to go to a convention to see this much talent in one location so if you are in the LA area on Saturday make sure that you stop by and join the celebration. 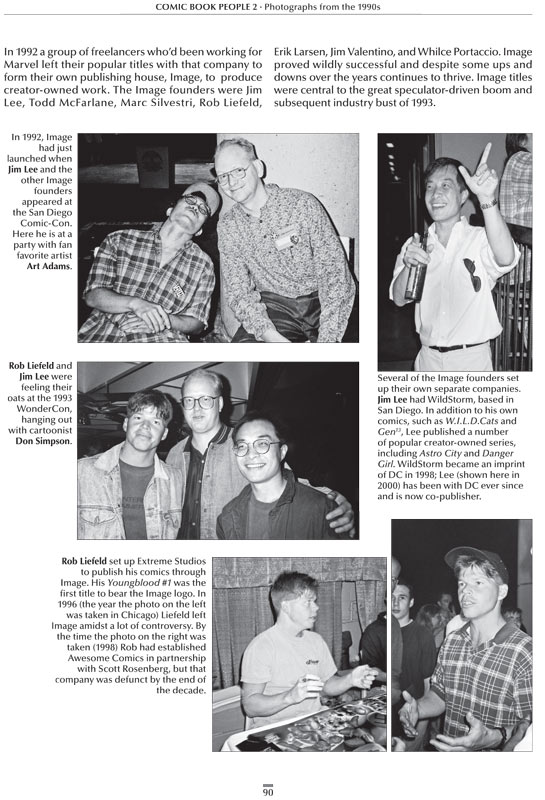 If you are not able to attend but still want to pick up copies of the books then you can get them directly from Jackie at Exhibit A Press Store . Make sure you also check out the Wolff & Byrd Supernatural Law books from her talented husband Batton Lash that are highly recommended! 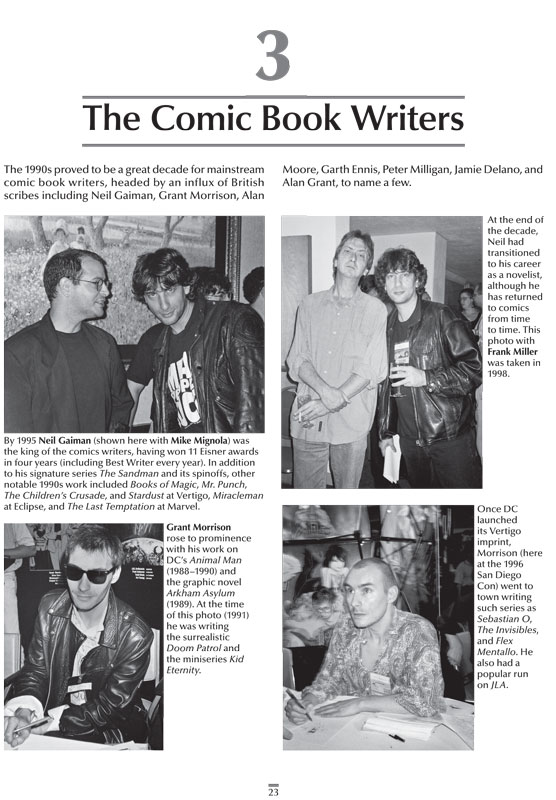 Here is the press release for the newest volume;

Jackie Estrada’s Comic Book People 2 Provides Unique Peek at the Comics Industry in the 1990s
The 1990s were a transitional era in comics: Image emerged, lots of other new publishers got into the mix, the direct market flourished, and the self-publishing and indie comics movements really took off. The number of comic conventions also increased all around the U.S. And Jackie Estrada was there, capturing the scene in candid images, hundreds of which will appear in Comic Book People 2: Photographs from the 1990s.
The high-quality hardcover coffeetable book is officially being published on September 10. It features some 600 candid photos taken at comic conventions in the 1990s, along with commentary and anecdotes about each image. The book is 176 pages, mostly with black-and-white images but including a 16-page color section. The Kickstarter-funded project is a follow-up to last year’s well-received Comic Book People: Photographs from the 1970s and 1980s.
“The 1990s were a great time for new faces that are now familiar fixtures, such as Neil Gaiman, Grant Morrison, Jeff Smith, Terry Moore, Garth Ennis, Colleen Doran, David Lapham, and Paul Pope,” says Estrada. “But even as these new creators came on the scene, a number of Golden and Silver Age greats were still with us, and I was fortunate to be able to photograph many of them.” Among the venerated artists in the book are Frank Frazetta, Carmine Infantino, Gene Colan, Al Williamson, Sheldon Moldoff, Nick Cardy, and of course Will Eisner and Jack Kirby.
It was during the 1990s that Estrada and her husband Batton Lash formed Exhibit A Press to produce his comics series Wolff& Byrd, Counselors of the Macabre (aka Supernatural Law). Many of the photos in Comic Book People 2 were taken at shows where they exhibited, from the Chicago ComiCon and WonderCon to the Small Press Expo and APE, as well as the San Diego Comic-Con. The book covers the full spectrum of creators, from mainstream superhero writers and artists to small press cartoonists, as well as people behind the scenes in the industry, such as publishers, editors, retailers, and distributors. Among the events of the 1990s featured are the foundings of Milestone and Friends of Lulu and activities of the Comic Book Legal Defense Fund.
Jackie has been both a comics fan and a photographer since the 1960s, and she has been to every San Diego Comic-Con. Her involvement in comics has included editing publications for Comic-Con, being the administrator of the Will Eisner Comic Industry Awards since 1990, serving as president of Friends of Lulu, and being the co-publisher of Exhibit A Press, which has produced Comic Book People 2. Her photos of comics creators have appeared in numerous books and publications, from Paul Levitz’s 75 Years of DC Comics and Julius Schwartz’s autobiography Man of Two Worlds to Alter Ego and Comics Buyer’s Guide. Most prominently, dozens of her photos were used in Dark Horse’s Comics: Between the Panels and in Comic-Con: 40 Years of Artists, Writers, Fans, and Friends. Most recently, her photos could be seen in the PBS special on the history of superheroes. 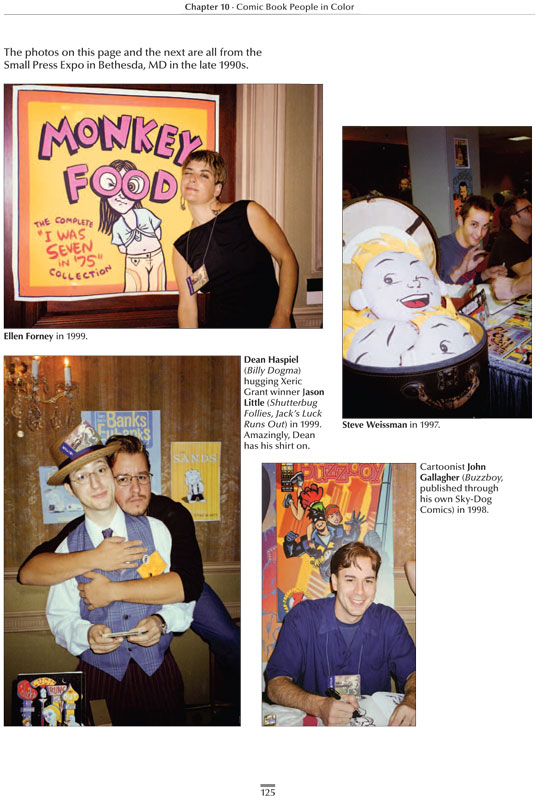 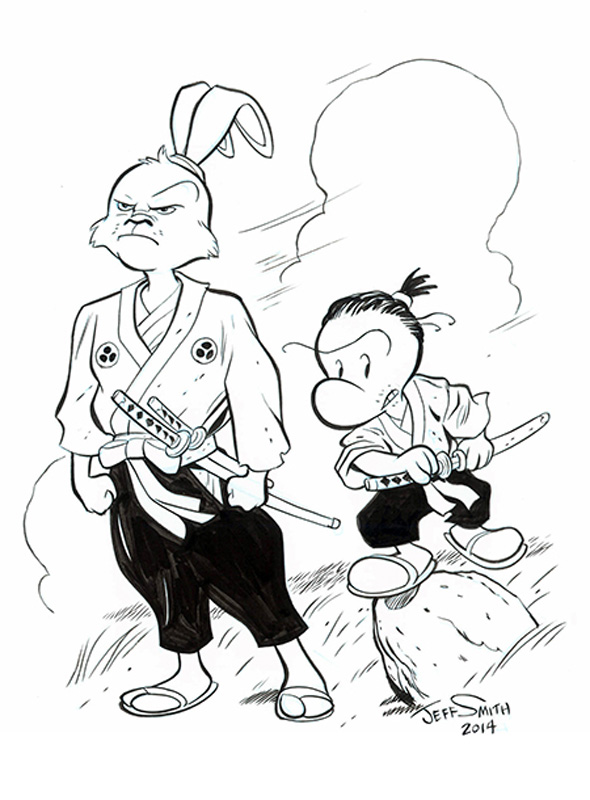 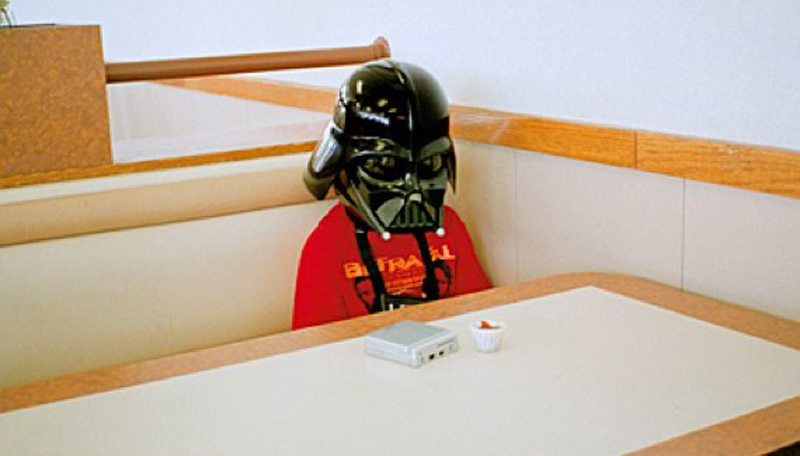 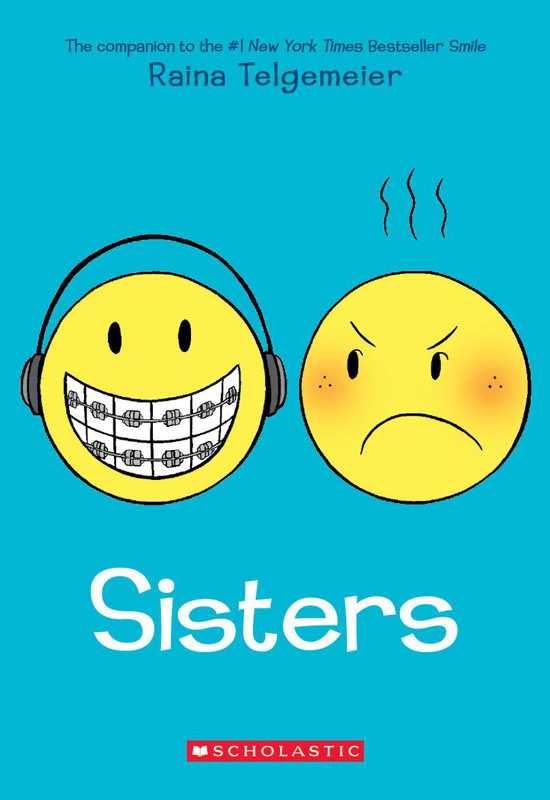 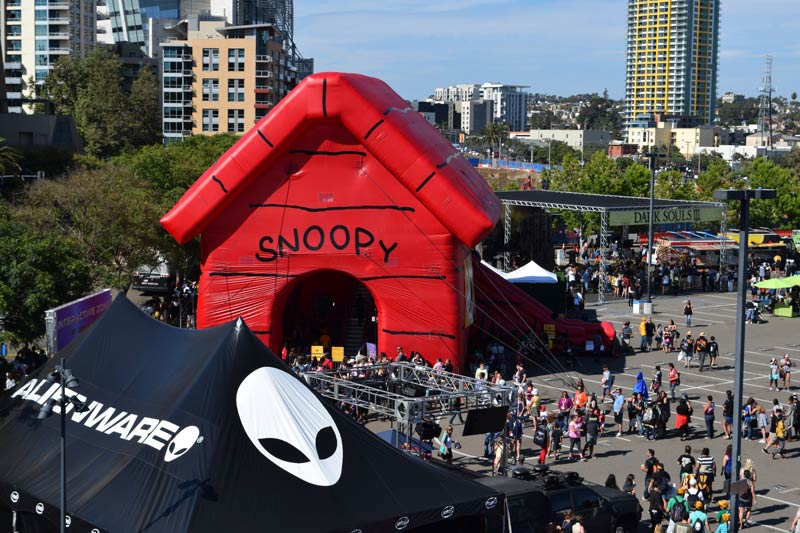