Well after a very busy weekend with the kids at Disneyland I finally got a chance to sit down and read the rest of week 3 villains issues and I was right in choosing the other books to read over the rest of the issues. So let’s see if there is any hope for the rest. 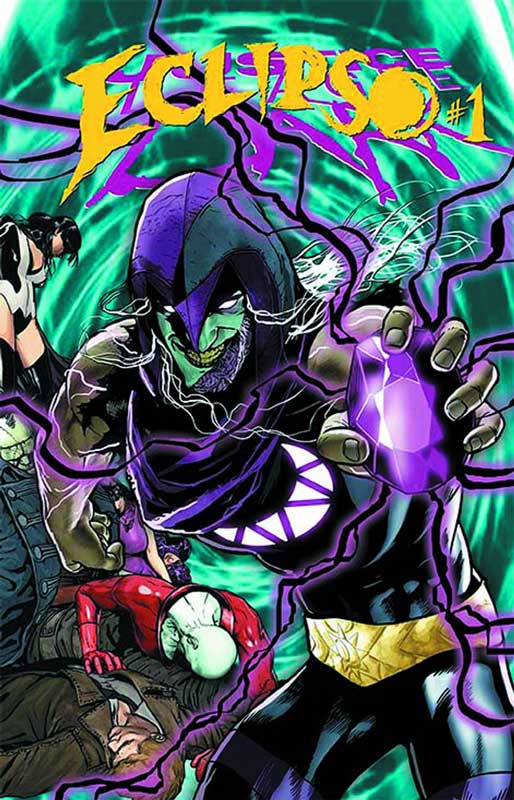 Well a lot has been said in the media about Dan Didio as President of DC Comics lately so we now come to a book written by him so let’s see how that works out. DC Comics plot synopsis is, The powerful Black Diamond has been seen causing trouble in different corners of The New 52. Now you will learn its secrets as it lands in the hands of the host it was always meant for…and the full power of Eclipso is unleashed! While the story is by no means embarrassing it’s not terribly great either. It’s a pretty by the numbers story telling. It’s give a new reader enough the basic origin of Eclipso but beyond that there is not much here to care about. The art by Tan is OK not much on the background front but considering the use of shadow backgrounds he gets away with it.

So is this book worth your time and money? No it’s extremely middling, by the numbers, mediocre story with serviceable art. Not a train wreck but Didio shouldn’t quit his day job to become a full-time writer anytime soon. 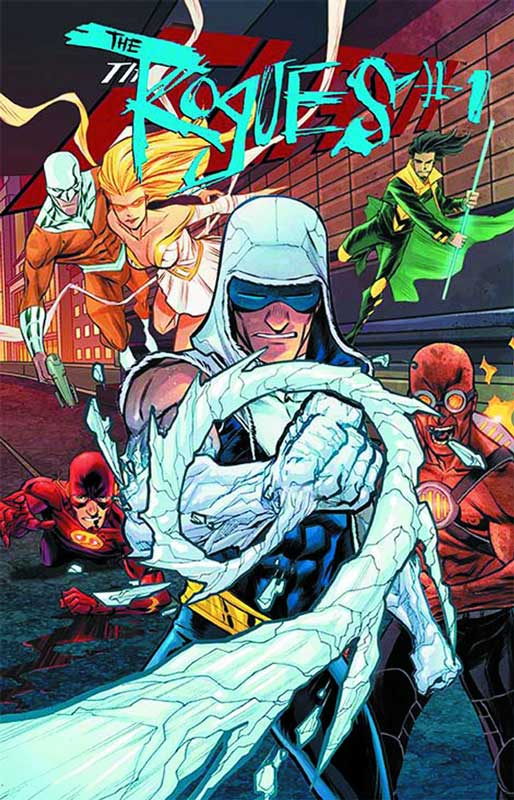 The strangest thing I found about this issue is that on the first page it says that this story takes place before Grodd #1 that came out last week. Now there is no direct correlation between this story and that one but one would think that you might have put this issue out before that. Considering that most of these books were done well in advance. Now I was not overwhelmed by Grodd #1 because of being dropped into the middle of an ongoing storyline but I am happy to say that this issue does not suffer from that problem. DC Comics plot synopsis is,The Rogues have their rules and their ways of doing business—so what do they think of the Secret Society’s claims that the Justice League is dead, and that the world’s villains need to unite?  It’s a culture clash that won’t end quietly! Written by Buccellato who also wrote Grodd #1 I was very impressed by his story here. Considering that he only has 17 pages of story to work with he really fleshed out the characters very well. While I haven’t been keeping up with Flash recently I never felt lost during the story. It also gave a very emotional side to the characters that you usually don’t see in standard superhero fare. Zircher’s artwork is nice and well laid out with some really nice backgrounds.

Is this book worth your time and money? I would say yes. A well paced story with some nice characterization for the page count. I really enjoyed the things and people are not always what they seem. It was a really nice read. 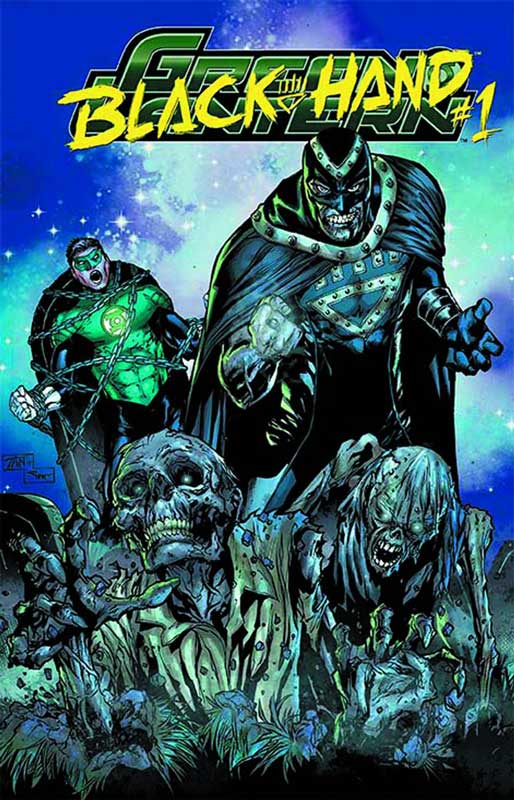 Poor Green Lantern has been chained up on that same rock for three issues (and again next week) due to the Photoshop monster over at DC this month. It seems that William Hand just can’t stay dead for very long. DC Comics plot synopsis is, In a world with no heroes, death lies behind every turn! Black Hand arrives to take advantage of Forever Evil, and he may be the most dangerous player yet! And when last we saw him, Black Hand was a pile of dust in the Dead Zone! How did he manage to return? So for new readers there is not much to go on in this story for you. While it’s kind of neat to have a villain bring back the dead to do his bidding that gets old pretty quick. Soule’s story is OK but never really goes anywhere. It just turns into a back from the dead and he is pissed at Hal Jordan and wants his hand back. I just didn’t really care by the end. The art by Ponticelli is very moody and does a very nice job for a so-so story that he is given.

So is this book worth your time and money. Nope it’s a middling story that really doesn’t do much. The nice moody art can’t even save this one. Not a terrible read just bland. 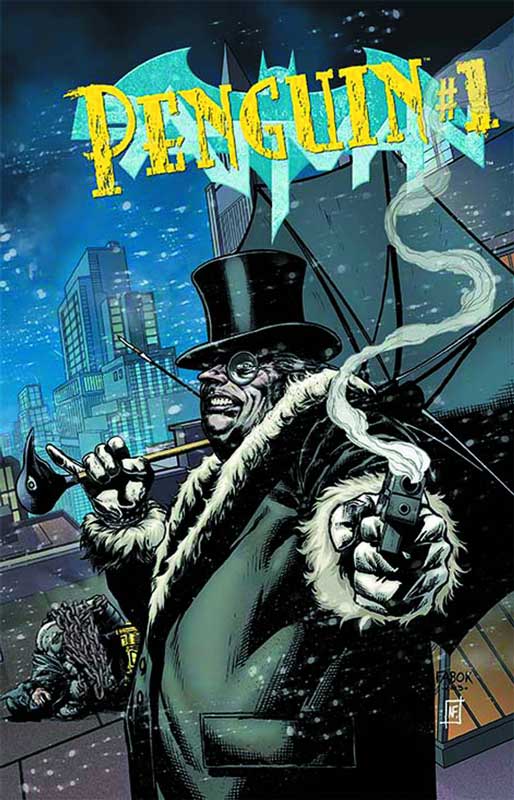 I have always had a fondness of the Penguin probably because of the 1966 Batman version played by the great Burgess Meredith and then later by Danny DeVito. I have always felt him to be one of the more under appreciated rogues of Batman. DC Comics plot synopsis is, Follow The Penguin’s latest quest for power as he prepares to undermine one of Gotham City’s most powerful politicians. What does the criminal mastermind stand to gain? The story by Tieri was surprisingly good considering the average villains month books. He really show that the Penguin can be a really ruthless villain and he is quite smart. The way that he played the governor was quite ingenious. I did like Duce’s artwork. It has a really nice style and his facial expressions are very good.

Is this book worth your time and money? I rather enjoyed this story. It’s certainly better than average villains months books and while not earth shattering it was a nice little read with nice art. It also has one of the better 3-D covers this week. 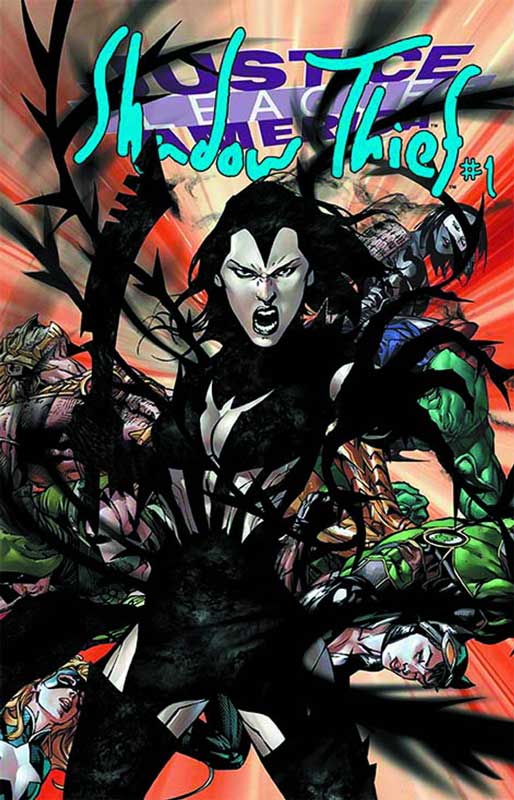 I was never a big fan of DeFalco’s writing I found this to be half way decent for him. The plot synopsis from DC Comics is, Where is the line between duty and villainy? For the new Shadow Thief, there is no question: Her mission to eradicate all alien life on Earth is above questions of morality. Armed with technology that allows her to become a living shadow, the Shadow Thief wages a covert war across the globe, but how long can she stay in the shadows before they consume her soul? While the story by DeFalco is very silly and at times the dialog ranges from silly to wooden I found it to be like a bad B Movie type book that you secretly like. While the story is a little jumpy at time I didn’t feel lost and the origin of Shadow Thief is pretty decent. The real winner is Hardin’s art here. He really salvaged this silly story quite well. Very well laid out and some neat visual angles helps you forget the sometimes laughable dialog.

So is this book worth your time and money? I found it to be a guilty pleasure. It’s pretty stupid but it like a bad movie that is kind of fun in the end. The artwork save it from oblivion. There are many better books that you could by over this for sure. At least it wasn’t boring like a lot of the villains month books are. 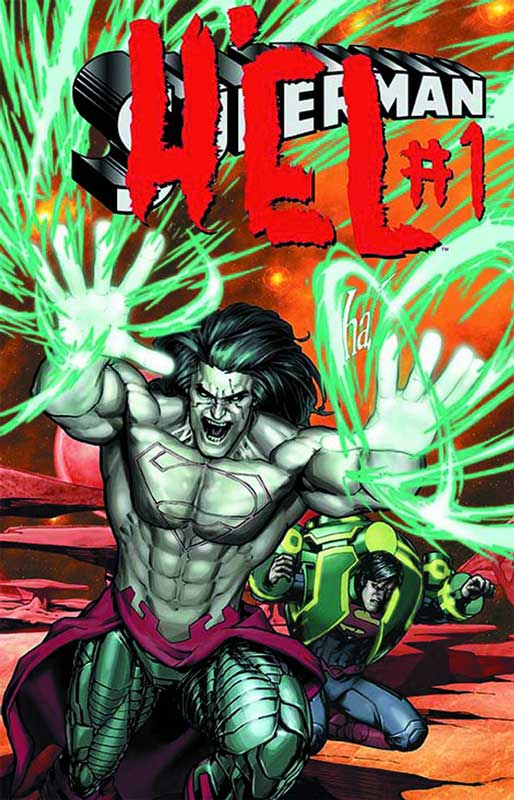 One word BORING. This is a really boring book. DC plot synopsis is, After his last battle with Superman, H’el wakes up on Krypton years before it is destroyed! Can H’el manipulate the Science Counsel, soldiers and countless others including Jor-El, to save the planet? And what does it mean for the birth of Superman if he succeeds? This book is a bad flashback to the 90’s and it should be sent back immediately.  I really don’t know what Lobdell was thinking when he wrote this. It’s not bad just goes nowhere and drones on for 17 pages. There are flashbacks to the reason that H’el is back on krypton but who cares. If that storyline is what this book spun out of I’m glad that I didn’t read through that. Jurgens artwork is one of the bright spots in this book. Solid if uninspired but with the story given to him he didn’t have a lot to work with.

Is this book worth your time and money. Zzzzzzzzzzzz Oh sorry I fell asleep from reading this. Bland, boring and really Lobedell, your better than this. Folks move along and go and read his other book The Wake over at Vertigo Comics and forget about this snooze fest. 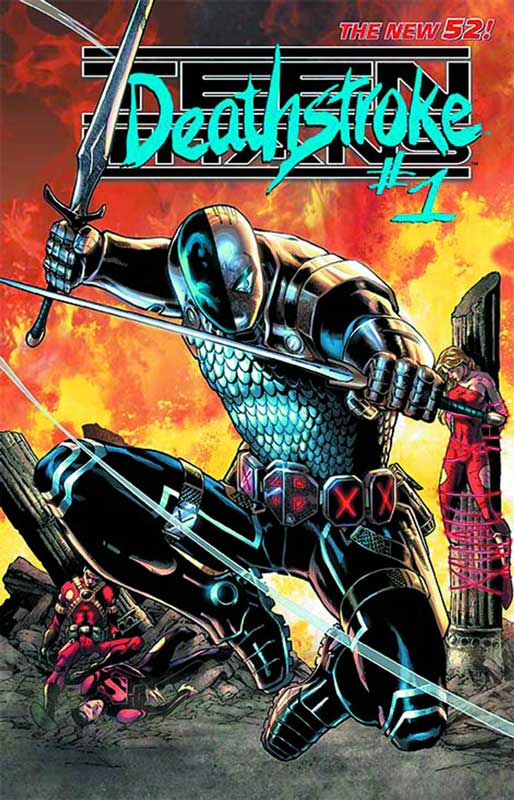 When doing these reviews I always take the plot synopsis from DC Comics website after I read the book. So here is the one for this issue, One of the deadliest men in the world has a secret: his family. Slade Wilson lives to kill, but can even Deathstroke the Terminator balance his home life with a complicated hit? OK nothing odd or weird but then there is this right under that, Don’t miss this amazing issue written by Corey Mays and Dooma Wendschuh, writers of the video games Assassin’s Creed and Batman: Arkham Origins. I literally laughed out loud on this one. Amazing really DC this is what you call AMAZING O_o, far from it. First mistake get so-called video game “writers” to come up with this run of the mill story that has been told a million times before and much better. This is why you don’t want to have to listen to the insanely bad story that most video games have. While the two games listed are better than average they certainly can’t write comics. Ultimately this is just a bad rehash of Deathstroke’s origin. The art in this book is pretty awful. There are three credited artist and it’s a real mess. While not Creeper #1 bad it’s all over the place. I will say that Moritat’s art is much better than this and hopefully you don’t gauge his talent on this book.

Is this book worth your time and money. NO! This book just wallows in its own mediocrity and not worth the read. The artwork is a mess. So The Creeper #1 is still the winner and champion of the worst villains book I have read so far still.

Here is an idea if you are going to write a set up for the Arkham War mini series great, but if you are writing a Scarecrow story write about the damn character. DC Comics plot synopsis is, See the new Gotham City through the eyes of the Scarecrow! It’s Arkham Asylum unleashed on humanity—and it’s all the Scarecrow has ever wanted! This issue just drones on and on. It feels as if you have read at least twice as long of a story than 17 pages yet you feel as if you have no idea what the hell the story was after you get done reading this one. Tomasi must have found a sale on words at the local store. There is one panel on the fourth page that the artist barely had a chance to draw in because there are so many words. Yet by the end of the book I felt tired and disappointed. You learn absolutely nothing about the Scarecrow in the entire story and that is the ultimate flaw of the book. The art by Kundranski pretty decent with lots of black backgrounds. There is not one good Scarecrow face shot in the whole book.

Is this book worth your time and money. If you are looking for a Scarecrow story you have come to the wrong place. The only real place you will see him is on the cover. I don’t now why they even bothered to call the book Scarecrow considering that it really has barely anything to do with him. It’s just pointless.

Well week three is over and we have one more week to go for DC Villains month with the gimmick 3-D covers is there any hope for next week? I doubt it but who know there might be a surprise. Brian Azzarello is writing the Wonder Woman issue so that might be good.