Surprising there were no #1 issues to review this week but, there are some new story arcs and second issues to keep up with. So lets see how they stack up this week.

Brubaker and Epting continue their spy noir book and the second issue is just as good as the first issue. The plot synopsis from Image Comics is, On the run from her own agency, Velvet must find out what really got Agent X-14 killed, and the only way to do that is retrace his steps… and that’s a pathway of dead bodies, ruined lives, and angry mercenary soldiers. And along the way, one of Velvet’s darkest secrets is revealed. Don’t miss the second issue of this white-hot new series, from the hit creators of the CAPTAIN AMERICA: WINTER SOLDIER saga! The first issue was a great set up and this issue is where the action kicks in. The great thing about this book is while the action is going on Brubaker never lets the overall story down during the action. We find that even though Velvet has not been out in the field in years that she has not lost her touch at all. Epting’s art really captures the action that you really feel like you are watching a big budget action picture. He not only captures the big action pieces but he also put great detail into the subtle facial features. The best thing about the book is how the overall story is unfolding. We as the readers are learning the mystery just as Velvet is. The pacing of the story is for me very satisfying. It never seems rushed while at the same time unfolds at a very methodical pace. The balance is just right.

Is this book worth your time and money? Brubaker and Epting are on fire with this book. The balance of the action and story are just stunning. So rarely are espionage books done in comics and of those very few are actually this good. If you love great spy stories then you really need to pick up this book. Highly Recommended!

While the first issue was a pretty straight forward set up to The Fox and gave a nice introduction to the characters. The second issue really falls off the rails, but in a really good way. The plot synopsis from Red Circle Comics is, When the beautiful Queen of Diamonds enlists our hero to save the diamond realm from the deadly Druid, the FOX faces a whole new dimension’s worth of pitfalls, peril and-familiar faces?! Then, acclaimed writer J.M. DeMatteis (Abadazad, Justice League 3000) and Eisner-award nominated artist Mike Cavallaro (Parade (with Fireworks), The Life and Times of Savior 28) take us back in time for an ALL-NEW story featuring the world’s first patriotic super hero and leader of the New Crusaders: THE SHIELD! What connection does Shield’s top-secret mission in the arctic have to do with the Fox’s diamond-studded adventure? And what ultra-powerful villains have arrived to wreak havoc?? Read on, dear reader-The Fox and the Shield have their work cut out for them! Haspiel has really taken a very middle of the road superhero and turn the book into a really wild ride. The aspect of the book that I really love is it’s goofiness, but it never goes too far over the edge of it. I really liked the idea of Haspiel not taking the book in the standard superhero adventures that we see far too often from the big two publishers. He is willing to take chances and take the book in directions that you are not suspecting. He is also creating an underlying mythology that is very intriguing. The Shield back-up story by Dematteis and Cavallaro is nice, it’s too short to see where it’s going at this point. At five pages it’s going to take a few issues for the story to get going and see where it will take us.

Is the book worth your time and money? If you are looking for something a little more off from the standard superhero fare then you really should check out this book. Haspiel has created a really smart and funny superhero book that is not afraid to go in different directions. He is also keeping the fun factor that made the first issue such a fun read. I’m excited to see where this is going. Recommended! 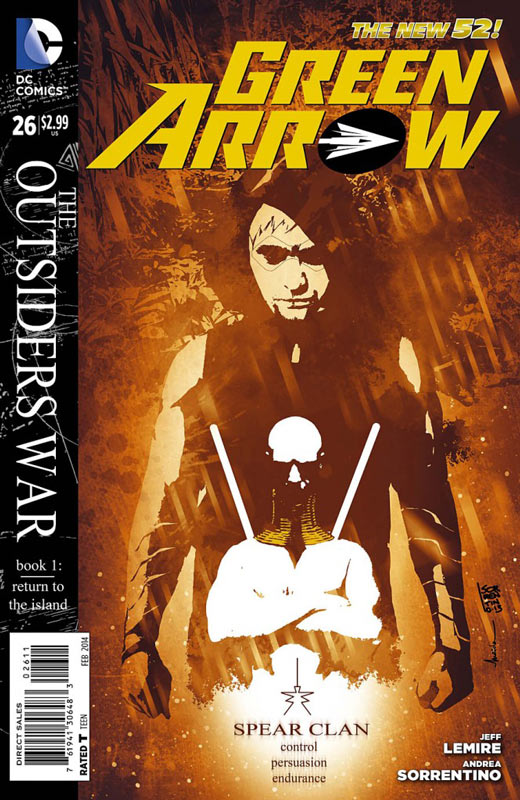 This issue kicks off the Outsiders War storyline and is a fairly good jumping on point if you have not been reading the current storyline with Lemire and Sorrentino. The plot synopsis from DC Comics is, “THE OUTSIDERS WAR” begins here! Oliver Queen finally knows the location of the Outsiders’ base, but first he must return to the place where Green Arrow was born: The Island! Secrets are revealed, new villains introduced, and a mind-blowing final page kicks off this new storyline with a bang! While I wish that there was a little more explanation of the back story for new readers the new story arc is very intriguing. Having Oliver go back the place where it all started is a pretty smart idea on Lemire’s part. We all know that story but creating a new story within is something that I wasn’t expecting. This issue is definitely a set up to the storyline and thankfully is not multi crossover story with other titles. There is a lot of exposition going on in the story. I am really liking the set up and seeing where the story is going to take us. I’m a really big fan of Sorrentino’s artwork on the book. It’s a style that you rarely see in a mainstream superhero book these days. He perfectly captures both the subtle and the big things with ease that it’s a marvel to look at. His detail is just amazing and his layouts are fantastic. Lemire did a great job with relaunching Animal Man and Frankenstein, and the Agents of S.H.A.D.E. and his creator own books like his current Vertigo book Trillium is just fantastic. A rare New 52 book that is a solid superhero book with both its story and art.

Is this book worth your time and money? If you have not been reading Green Arrow and want to jump in on the book this is a good place to start. But be warned if you like what you read you will really want to go back and start with issue #17 when the current creative team took over the book. The New 52 for the most part has been a bust when it comes to creativity on most of the books. It does seem that the fringe books are the ones that are trying to do something different. Lemire has done a great job with the relaunch of this book and it seems like he is being allowed to take the book where he wants to go with it. This book is well worth checking out. 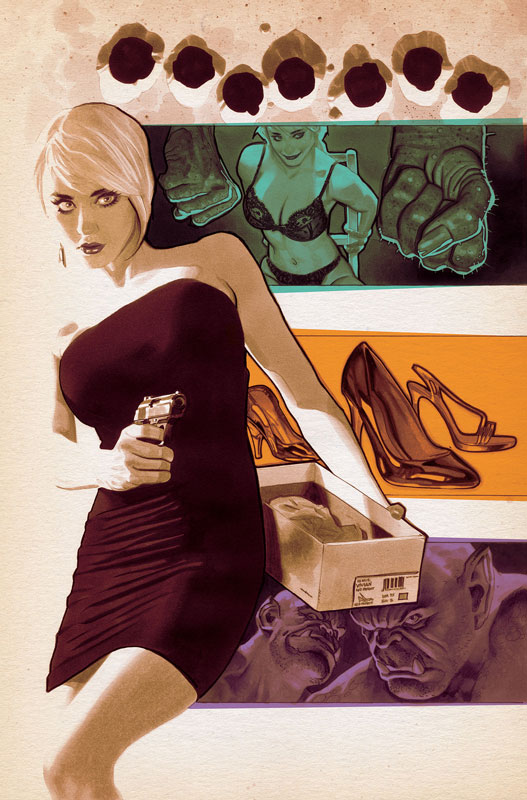 While Fairest is a spinoff of Fables it can be somewhat read on its own. While there is a ton of background to the characters this new storyline is a nice introduction to the Fables universe if you have not for some insane reason not a current reader to the Fables books. The plot synopsis from Vertigo Comics is, Cinderella returns in an all-new epic! After an assassination attempt on Snow White, Cind is called back into service to unravel an age-old conspiracy that dates back to that fateful midnight ball! Can Cind uncover the plot and prevent a massacre in Fabletown? For the first time in FAIREST, this globe-spanning adventure ties in directly with events in FABLES! Join us for “Of Men and Mice” a 6-issue tale by critically acclaimed writer Marc Andreyko (MANHUNTER, Torso, The Lost) and legendary artist Shawn McManus (CINDERELLA, SWAMP THING). This is the first story that ties to past events in the regular Fables book and while as a new reader be a little lost I do think that the story itself does stand alone very well. Anderyko has set up a very nice mystery with the always beloved Cinderella. This story is going to affect the whole Fables universe because what happens in this issue definitely takes the kid gloves off and it seems that no one is safe. McManus is one of my absolute favorite artist and has been a frequent visitor to the Fables universe. His art on the stunning Sandman run A Game of You and his issue of the Alan Moore run Pog is where I fell in love with his art. As per usual his artwork is just breathtaking and this story shows why. He just captures the story so well on every level. While I have been a Fables fan from day one, I am really loving the Fairest series because Bill Willingham has created such a great universe that allows other creators a great sandbox to play in. It brings in new creators and shares there voice on these wonderful characters but never strays from the feel of the universe that has been established.

Is this book worth your time and money? Look if you are not reading Fables or Fairest then you need to run out and start reading one of the best books that has been published in the last 10 years. It’s the book that has saved Vertigo Comics over the last few years. Fairest has been constantly fun book from day one. Andreyko and McManus have created the beginning of an epic story and I for one can’t wait to see where this wild ride is going to take us. Sit down and strap in because it’s going to be a wild ride on this one. Very Recommended! 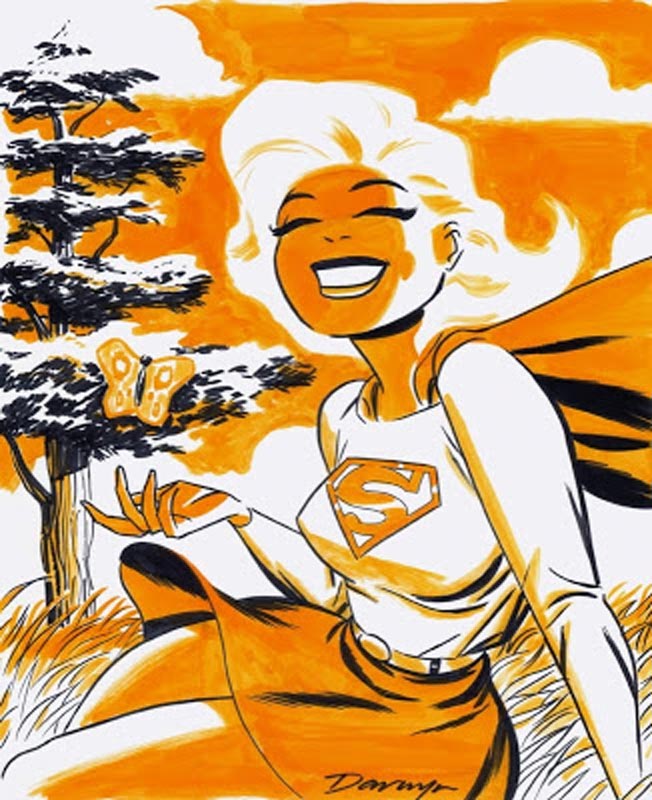