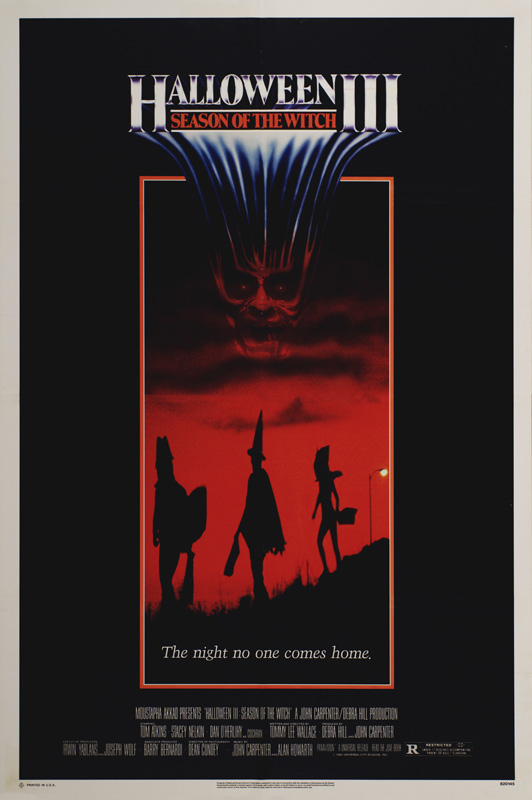 During the 1980’s there was the real golden age of modern horror films. There were two film specifically that started the slasher craze, Tobe Hooper’s Texas Chainsaw Massacre and John Carpenter’s Halloween. The irony of those films was that they contained very little blood and a lot of the violence was off-screen a left to you imagination. With the success of Halloween Dino De Laurentiis and Universal picked up the film rights for sequels to the film. While Halloween II was a box office success I felt that it was a retread of the original film and an unnecessary sequel. While Michael Myers was the draw the film without Carpenter at the helm it was not very good. Debra Hill the producer of both Halloween and Halloween II had an idea to take the Halloween name and brand and each year they would put out a Halloween film but they would not have Michael Myers in them and have a different theme and story. So that lead to Halloween III Season of the Witch. Hill brought back Tommy Lee Wallace to direct the film. Produced by Carpenter and Hill they hired British writer Nigel Nneale of the Quatermass series but with his hesitation with Hollywood any criticism of the script was going to meet with resistant Wallace who states in the supplements that about 60% of the script is still Nneale’s structure and plot. Carpenter then did a rewrite that Wallace didn’t care for that so he did the final rewrite but he notes that there should be more than his sole credit.

The plot is, Daniel Challis (Tom Atkins) , a doctor in a northern California hospital treats a scared old man, Harry Grimbridge screaming, “They are going to kill us!” and clutching a Halloween mask from the number-one best-selling Silver Shamrock mask company. But later Daniel is shocked when later that night: Harry is murdered in his hospital bed and the killer walks calmly to a car and blows himself up. His curiosity is more piqued when Harry’s daughter Ellie (Stacy Nelkin) arrives and tells Daniel that Harry was scared ever since he tried looking into the origins of the masks, since no orders for them are being taken for the following year. Daniel and Ellie go to Santa Mira, home of Silver Shamrock, to uncover what happened and are horrified to find out that the owner of the mask company, Conal Cochran (Dan O’Herlihy), is planning to use the masks and some black magic as one great Halloween trick on the children who are wearing his masks that coming Halloween. As time draws near on Halloween night, Daniel must stop Cochran from sending the signal out to activate the masks and he can only do that if he can get out of Cochran’s huge mask factory alive.

So saying that the film was not well received was an understatement. Most people were expecting another Michael Myers fiesta were disappointed. Most people were unsure what to make of the story. The gore element is not very high so some people didn’t like that. And script wise there are some issues with the overall story that are not really fleshed out so well. But even with its flaws I was impressed with the overall concept of the film. I really loved the idea of taking the franchise in this direction. Because we saw how churning out Michael Myers sequels worked out so well quality wise (and that includes the very unnecessary Rob Zombie reboot too). Lets face it Michael Myers as a character was a one trick pony and the second film kind of proved that. So using the witch theme for this film I think was a really good idea. The thing that make the film really work is the fact that the witch (Dan O’Herlihy) is going to kill kids because it need to be done as a ritual is just mind-blowing. The overall mood that Wallace sets is more like an old fashion horror film and doesn’t rely on gore as the main focus. While there is some nice and shocking gore but there is no gore for gores sake in the film. The best asset the film has is Director of Photography Dean Cundey who shot the original Halloween, The Fog, Escape From New York, and The Thing before doing this film. The look is just fantastic and Wallace knew exactly what he wanted and Cundey made it all work so well. The score by Carpenter and Alan Howarth really add nice touches to the feel of the film. The cast really make the film shine. Tom Atkins really brings the goods to the main role. While not exactly Shakespeare here he does an admiral job. Stacy Nelkin does a nice job of playing the damsel well and when you find out her secret in the end it’s pretty shocking. Of course the real treat is the villain played by Dan O’Herlihy he really brings a heft to the role that is much-needed. He is such a great villain that the film really needed. He embodies evil so well in the film its truly frightening. While the film is flawed I still thing that it’s more of a gem that is a little rough around the edges than as bad like most people think. 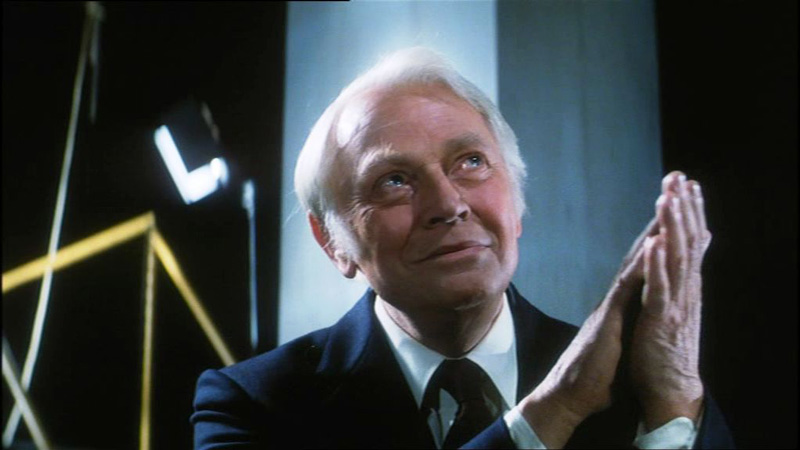 Thankfully Shout Factory has licensed the film from Universal and has given the film a nice Blu-Ray debut that it really deserves. The correct 2:35 original Panavision aspect is faithfully made with a nice transfer to high-definition. The picture recreates the film elements quite nicely. Thankfully all the nice film grain is still there but still has a nice sharp picture. The picture transfer is obviously limited to the low-budget source material used and I doubt there has been any restoration done it looks quite nice considering. Black levels are good and the color and contrast are pretty solid. While the picture is not going to win any awards its by far the best home version of the film to date. The audio thankfully has not been remixed and the disc retains the original mono mix in a 2.0 DTS-MA soundtrack. The sound is good with natural dialog and a pleasant overall feel.

Shout Factory has done all new supplements for this release because previous releases had no supplements at all.

Wallace is joined by Rob G from Icons of Fright and Horror Hallowed Grounds Sean Clark that I would call more of an interview than a commentary. While they are watching the film in the background it turns into more of a Q&A session. While the track is nice for me it was a little dry because if you want a Q&A do that but a commentary should be about making spur of the moment thoughts on what is happening on screen. There is a lot of good information on the track but I think if there had been some more cast and crew involved it might have turn out a bit better. Still well worth listening to but just go in knowing that it’s not a commentary track.

Atkins is joined by project producer Michael Feishe that again is a bit more of a Q&A than a commentary but the thing that really saves this one is Atkins. He really has some great stories and is really having a good time watching the film and reminiscing about his career and the film. There are time where they talk about what is going on in the movie but again not a real commentary. But this one is a lot more lively than the Wallace one. Again not knocking either one just pointing  out that they are not real commentaries. 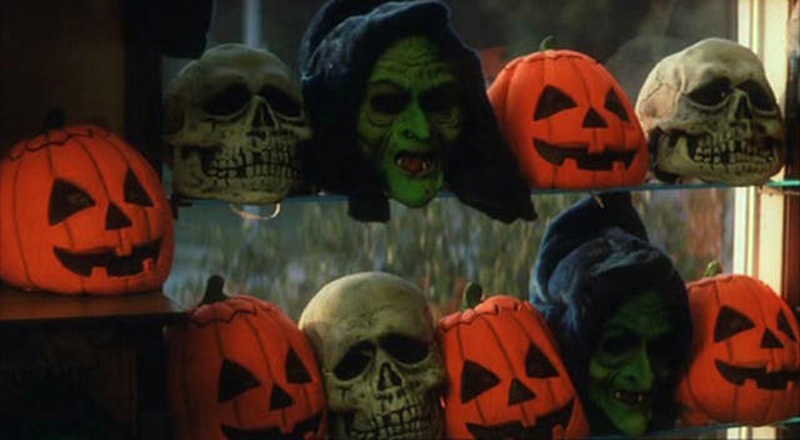 This is the real meat of the disc. This includes interviews with all of the surviving main cast and crew. That gives a real insight to the development of the project, making of the film, reaction at the time of release and the legacy of the film today. One of the most fascinating things is Producer Irwin Yablans who had nothing to do with the film, goes on about how bad the movie was and that it was stupid to make a Halloween film without Michael Meyers. It just shows how sad that it’s about the money and not about doing anything creative. This is a really well done documentary that doesn’t pull any punches about the film and it’s reception. They talk about the fun of making the film and the freedom and family that Debra Hill brought to the project.

Host Sean Clark and Tommy Lee Wallace go back to some of the shooting locations used in Halloween III. This is a nice but a bit fluffy piece about going back to many of the location used in the film. A lot of the locations have not changed very much including most of the town of Sierra Madre where the Silver Shamrock factory was. 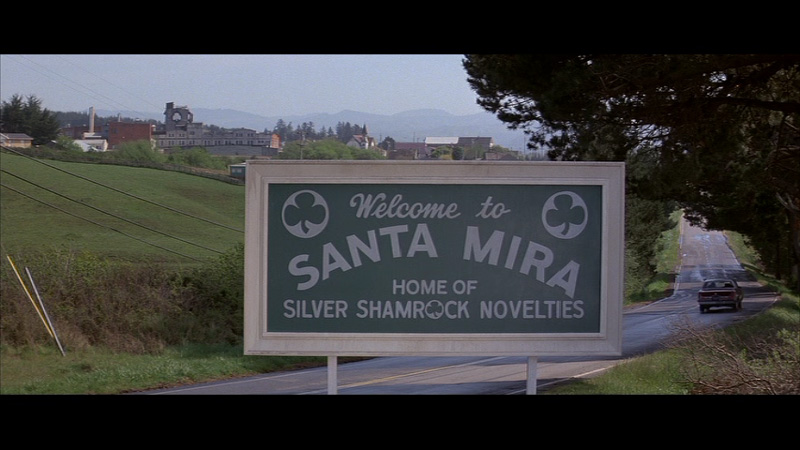 TV Spots (1080 Up-converted from SD source 1:35): There are three TV spots that are probably form VHS or Umatic tape source.

Theatrical Trailers (1080p  2:44):  There is a teaser trailer and the full release trailer in full HD.

Shout Factory has been doing a great job with there Scream Factory line of horror titles. Halloween III has had a bad rap over the years and while the film is not perfect the overall concept is really great and considering the budget, script challenges and the limited production time the film is a truly different type of horror film for the time. It’s far more imaginative than the second film and it’s a shame that it was not well received at the time of the release. It would have been very interesting to see more films under the Halloween franchise banner that were original ideas and not just rehashing the Michael Myers formula. This is a nice addition to any good horror collection and well worth checking out. 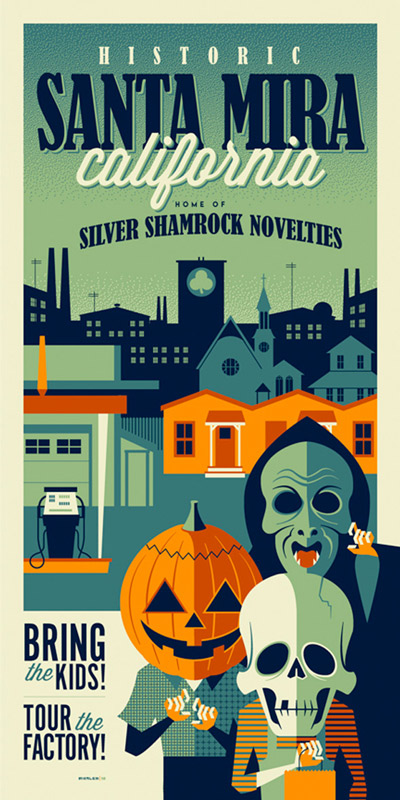