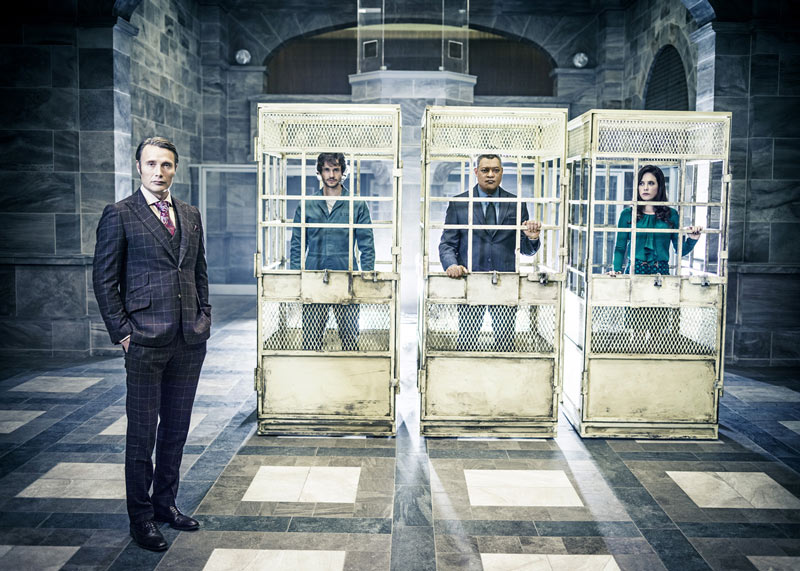 Well it was a long time in the making but Pop Culture Maven is very proud to announce its first ever contest. You could win one of three copies of Hannibal Season on Blu-Ray. While other sites have given away copies of Hannibal on DVD, here at Pop Culture Maven we believe that you deserve the best presentation of Hannibal available. That’s of course Blu-Ray! And what would be better than getting a copy of Hannibal on Blu-Ray then signed by the cast and crew of Hannibal! Yes they are signed by Hugh Dancy, Laurence Fishburne, Mads Mikklsen, Caroline Dhavernas, Aaron Abrams, Scott Thompson, Blu-Ray Producer Cliff Stephenson and Creator and Executive Producer Bryan Fuller. 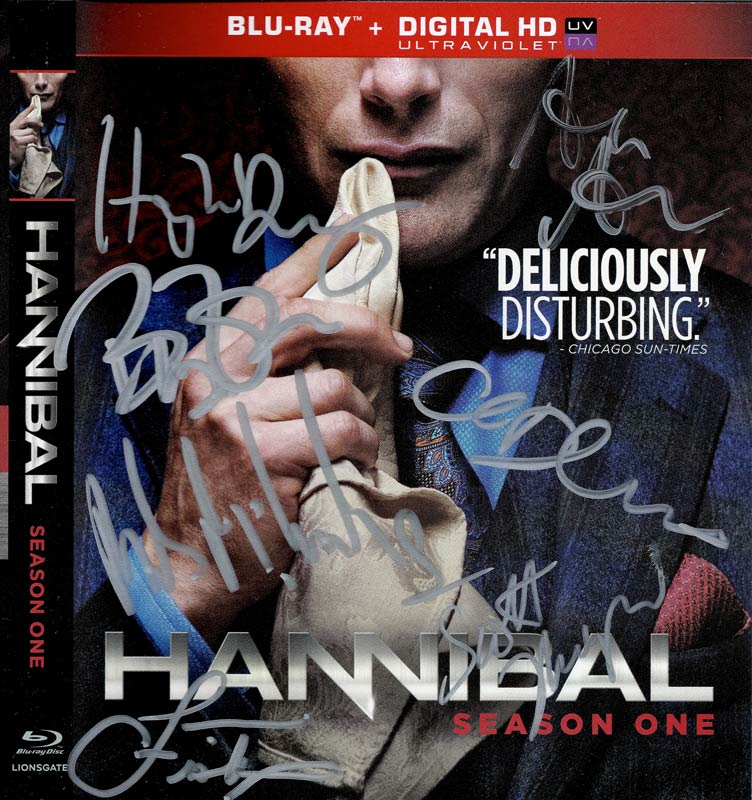 But wait there is even more. The Grand Prize winner will receive a copy of the Blu-Ray and a signed script from the first seasons episode “Amuse-Bouche” signed by Hugh Dancy, Laurence Fishburne, Mads Mikklsen, Caroline Dhavernas, Aaron Abrams, Scott Thompson and Creator and Executive Producer Bryan Fuller. 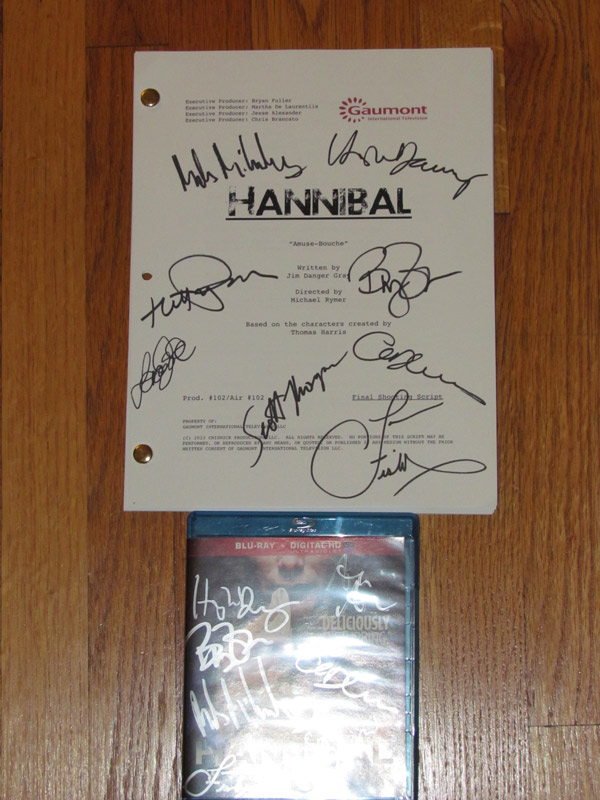 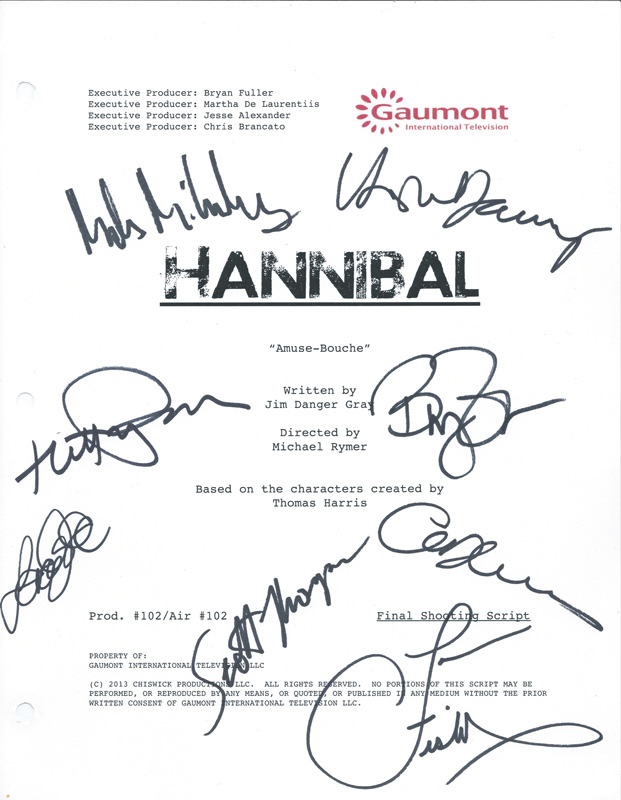 The first and second prize will include a copy of the Blu-Ray and the San Diego Comic Con exclusive “Eat The Rude” t-shirt from the 2012 convention. The shirts are size small but they are still pretty darn cool. If you can’t wear it then put it on your kids and or dog. They will look pretty spiffy in it. 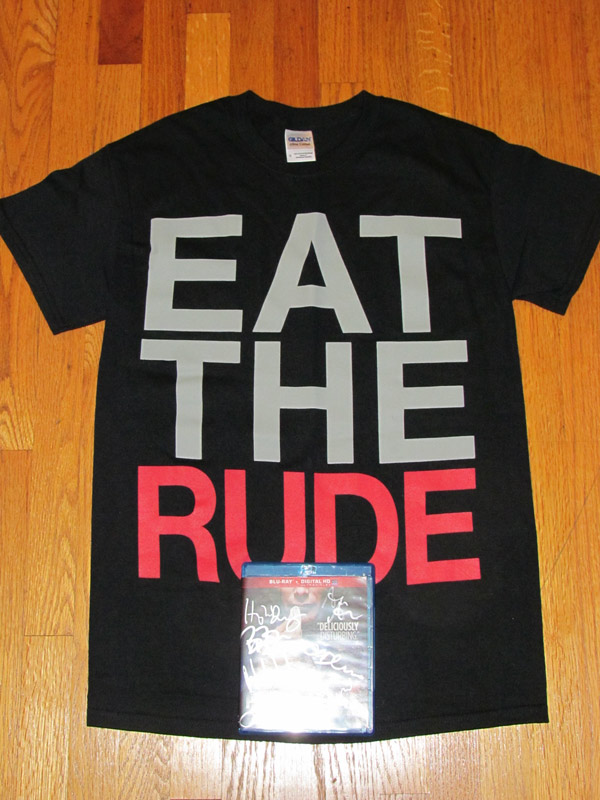 I want to thank some very special people who helped this contest happen. First is Bryan Fuller himself. Bryan is one of the nicest people you could ever meet and when I asked him if he could sign some Hannibal season 1 Blu-Rays he not only said yes but he could get the cast to sign them too. So I am truly indebted to Bryan for doing this for my little site. I want to thank Alex Webster and LionsGate Home Video for getting me the copies of the Blu-Ray to give away. And last but certainly not least Associate Producer Loretta Ramos from Hannibal for coordinating getting the covers to the cast and crew in Canada for them to sign and also for getting the script and t-shirts to make the contest something special for the site.

So how can you win one of these really awesome prizes? Well you have to put a little effort into this one first you have to like our Facebook page and or our Twitter feed. That’s the easy part. Second you have to correctly answer two questions from the interviews that I had with Bryan Fuller and Blu-Ray producer Cliff Stephenson. (Click on their names to go to the interview to get the answers)

What actor is Bryan “desperate” to work with?

What was Cliff’s biggest project that he has done to date? (Hint it’s a LionsGate title)

So when you find out the answers you must put them in an email and send them to steven@popculturemaven.com Only one (1) entry per person and the contest runs from Monday February 10th 12:01am PST to Saturday February 22nd 12:01am. Winner will be selected at random by me from all eligible entries. You must be 18 years or older and live in the Continental United States. Sorry Alaska and Hawaii and outside the United States. For the complete rules go HERE to read them.

One thing that you also need to do is tune in to season 2 of Hannibal on NBC Friday February 28th so that the ratings are really good. Make sure that you tell your friends to tune in also. We really need to spread the word about this great show.